Along the Silk Road Today

[T]o get to the Desert Rain coffee‑house in central Leh, you have to walk off the crowded main street that leads to the mosque and slither through a passageway to a parallel back lane, barely paved, too narrow for more than three people to pass at a time, in the process forever of being completed, so it seems, with the ruins of Leh Palace above it on a hill. You enter through an opening in the back of the building and then, in the classic Himalayan fashion, ascend a steep flight of stairs to a small second-floor space overlooking Bazaar Road. You step into it, slipping off your shoes, and enter a seeming miracle of sunlight and calm, with little tables set here and there where you can drink cappucino and browse among the books all around you.

I climbed up these steps one day in midsummer recently, on a Saturday night, for what I thought of as the “Kyoto Connection” of the Indian Himalayas: an open-mic night is held in the Desert Rain now and then to allow people to share song and dreams. On this night, every other person in the room but me was Ladakhi. They were girls, most of them, of high-school age, whom tourist dollars were sending to private-schools in Delhi or around the plains of India; they were conversant with Nike and Britney and most of the wonders of the world, giggling like regular Valley Girls as they asked me what I did for a living and what I was doing in their land. At the front of the room, an earnest young Ladakhi in glasses was struggling his way through “The Times, They are A-Changin’” and old Eagles hits, the girls delightedly singing along with every word, though his delivery had none of the conviction of the renditions of “Hotel California” or “Californication” you can hear among Tibetans in the coffee-houses of Dharamsala.

We sat in the little space, ringed by snowcaps, under a pulsing moon, 10,000 feet above the sea, and many hours from what the Eagles might consider civilization, and we tried to jolly into being all their songs of hard women in Los Angeles, the dangers of cocaine. The proprietress of the Desert Rain — from Colorado — came in from the back and the population of foreigners was doubled (I’d seen her a day or two before share pie and coffee with some English soldiers helping to keep the peace in Kashmir, not far away). The very name of the fresh and spotlessly clean space might have suggested the desert rain of Rumi poems, familiar to skullcapped petitioners at the mosque down the road, or just a play on what music meant in this parched and desolate plain among the Himalayas. In fact — I looked around more closely at the books on every side — it spoke for a Christian vision of grace; here in Leh, as in the South Pacific and among the Indians of South America, it was Mennonites who were coming to bring their own songs of salvation to those long denied much contact with the West.

I had thought, in my ignorance, that Ladakh was the last unspoiled corner of Himalayan tradition (Bhutan was more pristine, but only because of a policy of cultural homogeneity that Nepalis and Tibetans see as fascism). I knew that it had great Buddhist gompas on its hilltops and that its people still lived in whitewashed, two-story houses among the barley fields that were more “Tibetan” than anything you’d find these days in Tibet. But on arrival in the faraway mountain kingdom, not far from an ongoing “Line of Control” separating the enemy armies of India and Pakistan, I found that, officially, roughly half the population of Ladakh is Moslem — hence the great mosque down the street — and that for centuries it has been one of the major trading centers of the Silk Road. To the Westerner from afar, Ladakh means an area that was closed to tourists by the Indian government till 1974, and that did not see street lighting till the end of the first Clinton administration — the last word in Buddhist isolation. Along Bazaar Road, though, the faces of the women seated on the sidewalk selling vegetables spoke for Herat, Kasghar, Samarkand, and centuries of traders going on from here to offer silk and indigo and gold and opium to far-flung neighbors.

The Silk Road is a living presence in Leh, therefore, and speaks for a natural crossroads where Tibetans and Nepalis and Indians converge to trade their goods, to run hotels for a while, to contribute what each can to a medley culture. But down the road from the mosque is a Pizza de Hut restaurant on a rooftop, offering tacos and fries under red-and-white umbrellas that advertise cell-phones. At the nearest intersection sit many of the little settlement’s 150 travel agencies, selling themselves to foreign visitors with names like “Ecological Footprint Travels” and “TIBET EXPEDITION.” You can learn traditional Thai massage now in the tiny Himalayan town, see Pirates of the Caribbean days after it opened in L.A. and stop in at a German bakery on your way to a Full Moon Partry. When you disembark at the little airport, you are greeted by notices — in English — that tell you to “avoid buying products from multinational corporations, which are eroding cultural diversity.”

The new Silk Road — 20 years ago I called it the “Denim Route” — exists in Prague and Lamu, in Cuzco and Sumatra; it has its most vibrant and growing life, perhaps, in the virtual global village of cyberspace. And when I go to a place like Leh —or to Lhasa or Kathmandu or any of the great trading-posts in the Himalayas–what I find is all the ways it’s adapting to new markets, different audiences, a more global need these days. It’s still crisscrossing Central Asia, but now it’s full of young Danes carrying stories of trekking across the Andes and peace-keeping forces from Montana in search of apple pie; of Japanese boys with pony-tails bringing aid to less materially fortunate nations and Himalayan kids singing “Tequila Sunrise” in Christian-run coffee-houses to an Indian from England who likes to imagine he lives in Japan.

The foreigner who comes to Ladakh — let’s say me — is coming for the “authentic,” as he sees it, and tends to be unsettled, even outraged, by the fact that other foreigners have come to Ladakh in search of same; often, in fact, he cries that Ladakh is “spoiled” because it’s so full of people like himself (sounding like those compulsive criminals who beg that they be imprisoned before they can do more harm). In Leh many of the foreigners who have come over the last three decades have worked heroically to try to encourage Ladakhi traditions, to protect old customs before they are swept away, to protect the Ladakhis, in all senses, from themselves. The Ladakhis I met seem to cry out to be “spoiled” and long for the privileges that allow people like me to travel across the world and learn from cultures different from my own. Tourism, in fact, is just the latest industry that has enabled them to set up their tents farther afield and ensure that their children have better jobs and lives than they could have imagined.

For centuries their ancestors have sat along these dusty streets watching the caravans take off in every direction, towards Srinagar or Yarkand, bringing unimagined riches and treasures into a somewhat secluded land. The routes they survey have nothing to do with right and wrong, and everything to do with supply and demand. Need is what all of us have in common, they might be saying, and one part of a fruitful friendship is that you give me something that I’m in need of, and I do the same for you. Teach me the words to “Life in the Fast Lane” — and what that reference to “blow” means — and I will tell you the story my grandmother’s grandmother told me about Padmasambhava and his transport to the cave.

I sat in the Desert Rain on this warm summer evening, rejoicing in a quiet space where the airport is named after a lama and the only newspaper in my hotel was eight years old. Men in elegant dressing-gowns (as they looked to me) were conducting traditional archery contests in the outskirts of town, among the fields, and a few days before I’d watched marmots and wild kiang up at a pass 18,350 feet above the sea. When I climbed to the rooftop in my hotel I could see stars beyond number, and large Buddhist structures in the hills all around looking over me. I thanked Jet Airways and Singapore Airlines for bringing me here, the mighty dollar and the fact of immigration, which allowed me to be born in England, as opposed to my parents’ Bombay, and so to grow up with a much wider sense of possibility than they had.

The girls around me giggled and asked me for a business-card. “Can I write to you?” one said. Of course; I was one way she could begin to make contact with a world as romantic and exciting to her as hers was to me — to feel that she had the beginnings of a foothold in the magical realm she’d heard of in the Eagles’ songs. I hadn’t come here for trade, and nor had she. But here we were, in the little candled space, built by traders in an alien faith, engaging in the age-old Ladakhi custom. You have gold, she might have been saying to me, as she glimpsed my passport peeping out of my pocket; I have tea and incense and stories.

Silk seems so exotic to us now, though once it was as everyday as any other good being bartered. One day perhaps “The Last Resort” or “The End of the Innocence” will acquire that faraway glow, too. All of us were traveling as we sat in the warm, bright room, and the lights around town began to go out around us; but we were heading in opposite directions, as travelers had always done among the snowy passes, the dusty thoroughfares, of the Silk Road.

This article was featured in KJ74: Silk Roads, now available at a special discount! 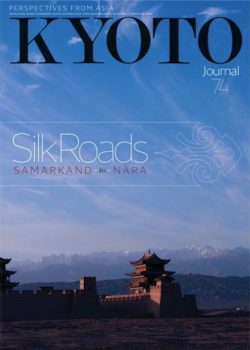