My father-in-law was a flyer. A man of the air and sky. A man of dreams and bravery, of duty and responsibility. He was fiercely loyal to family and country even when they were not so loyal to him. He killed and coddled and loved and died but not before finding his heart—his way—in the snip of the smallest blossoms, the nip of the newest dwarf limb; a pilot who found his landing place.

A complex, compact and wiry man, his viper-quick strike of temper may have originated on the deck of the USS Tennessee. It made him permanently sad, pulling his fellow sailors from the burning waters of Pearl Harbor, their skin slipping off their bones, off his fingers, in rags. He knelt for hours, injecting his screaming friends with morphine, row after row of them laid out along the boards.

Later in life, his bursts of elfin humor may have been an attempt to reconcile that infamous December day with the rest of life; to allow the echoes of his shipmates to bounce into the past and to mute their anguish with jocularity and jokes.

His keen mind never faltered, not through the war nor through the discrimination against Jews that held him to the rank of captain, in spite of his mastery of the biplane, the P-38, the Mustang and the supersonic jet.

After touching down for the last time, he entered a world of drawing-board war and experimental peace; reprisal throttling down to forgiveness. As he envisioned the initial workings of the Sidewinder missile, he simultaneously planted his first miniature gardenia. As he considered the trajectories of cruise missiles launched from both air and sea, he clipped the sprouting bows of baby holly. To clear and organize his mind between sketches of submarine-launched ballistic missiles, he buried himself in the capillary roots of a white pine that would one day sway with the wind like the sea waves beneath his former ship. 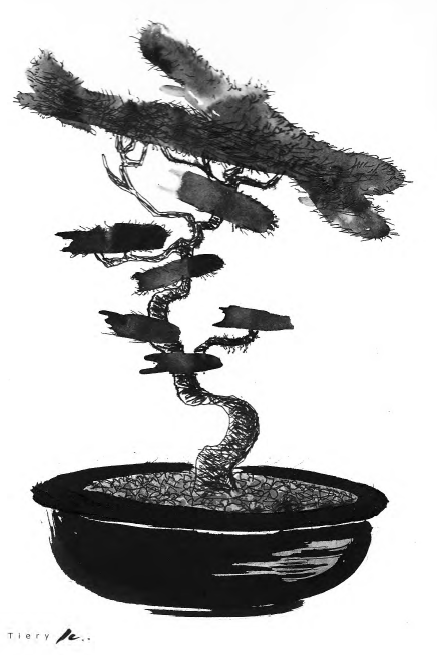 This small-town sailor, who had found himself in the midst of a lethal assault took refuge in the very culture that had damaged him. He spent much of his adult life repairing those wounds: reaching with nimble fingers, inside the art, the best, of the nation he thought he hated; stroking its soul— and therefore his own. He found reprieve in the exquisite delicacy of a wisteria, sculpted decade upon decade, until it yielded under his fingertips, under his love, into cascading profusions of lavender on a five-inch trunk.

He directed his own compass, reached up into that wild blue yonder and brought himself back, to anchor in a safe harbor of carving; paring down his pain, reducing and elevating to common ground what he once thought to be the enemy as others had once thought of him.

I watched him one day from a window, not long before his death, stooping and shuffling from one blooming old friend to the next, dipping his nose into the air to inhale the plant made entirely of scent. His gnarled, quivering hands extended out to the hibiscus, now thick-trunked and contorted with the gusts of life. With eyes as soft as clouds, the same hands that had once reached out to his shipmates now hovered beneath a single fragile flower, decades in the making.