For me, travelling to the Larung Gar Buddhist Academy in Garze Tibetan Autonomous Region, Kham (Eastern Tibet), was a small pilgrimage in itself. The nearest big airport is at Chengdu, in China’s Sichuan Province. From there it is over 600 kilometers by road. Passing through many scenic Tibetan villages, I experienced more and more the unmistakable feeling that I was stepping back in time.

Politically, Kham has been, and still is, a very troubled region. In 1959 after the Chinese invasion and the national uprising many people were killed, or lost their homes and had to take refuge, mostly in neighboring India. Many monasteries, holy places and the like were destroyed during the so-called Chinese “Cultural Revolution” (1966-76). Political problems are ongoing, since Kham is particularly attractive to China for its water resources — four major rivers, the Mekong, Yangtze, Yellow and Salween all originate there. But now it is wonderful to see that many monasteries in Kham have been reconstructed and are clearly cherished. The nuns and monks undertaking their studies are very disciplined, serious and eager. 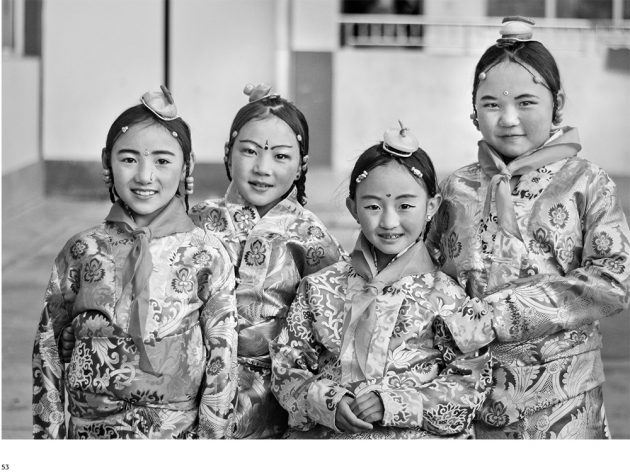 I decided to make this journey with two stops, in Kangding (Dardo) and in Ganzi. Kangding is the capital of Garze Tibetan Autonomous Region, and the “tea road” gateway to the Kham Region. In the town itself are many beautiful Tibetan monasteries like the Ngachu Monastery, founded in 1654, Lhamo Tse Monastery, and Dordrak Monastery, which is more than 400 years old. Dentok Monastery on the top of Mt. Paoma overlooks all of Kangding.

Ganzi, some 300 km further on from Kangding, is one of the most beautiful and truly exceptional places I have ever seen. Never have I met so many warm-hearted, smiling, cordial and benevolent people in one place. Every second person welcomed me with a heartfelt “Tashi delek,” or just smiled at me.

The surrounding landscape is breathtaking, with snow-covered high peaks and endless wide lush green hills. Buddhism is about recognizing one’s own inherent purity, and I always have the feeling that the higher the altitude the more the landscape too gains in purity and clarity, so the wide, endless gaze one has in these magnificently vast regions has a profoundly liberating effect.

I visited Ganzi monastery, located on top of a hill above the city. Right behind it is a beautiful nunnery. Most wonderful was the ancient Degongbu temple in the town center. It’s small, but actively visited by residents and pilgrims. It seems to carry the ancient traditions and blessings of many years of undisturbed devotion. The main hall is dark and atmospheric, with statues of the gods lit by butter lamps. Its artworks, frescos, statues and thangkas are of utmost beauty, made by great artists.

I think one can deeply recognize any piece of art that has been made with devotion and love—it has some unceasing magic and flavor about it, which speaks to everybody. Some of these wonderful artifacts have fortunately been saved in Kham. Very many were destroyed, but I could see also many new pieces of shining brilliancy. 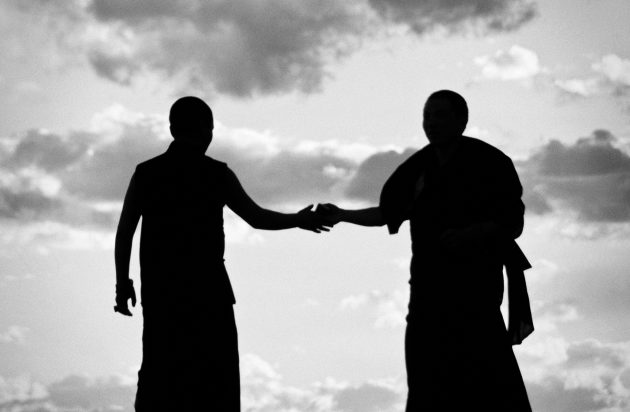 My final destination, Larung Gar, is located in the Larung Valley near Serthar. On arriving at Larung Gar Buddhist Institute I was struck by its immense size. Around the temples and main buildings thousands of self-built bungalows stand side-by side, where the monks and nuns live. One red wooden hut next to another, endlessly, embedded in the green, wide, hilly landscape.

This site was chosen because of its history as a sacred place in Vajrayana. It is said that His Holiness the First Dudjom Rinpoche stayed there with his thirteen disciples who attained “rainbow body.” Khenpo Jigme Phuntsok founded the Institute in 1980, especially due to the urgent need for renewal of Tibetan Buddhist study and meditation after the Cultural Revolution in Tibet, to revitalize the Dharma for the benefit of sentient beings. 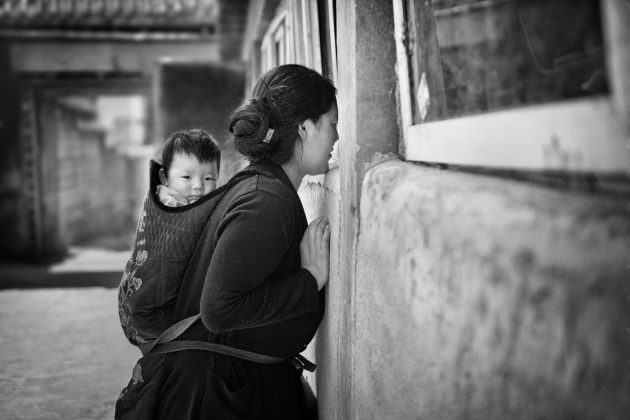 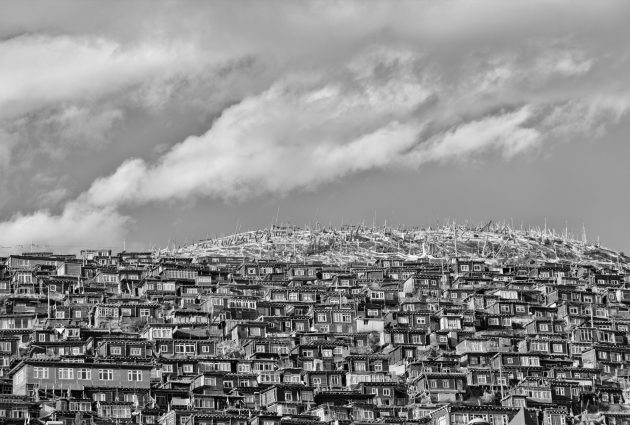 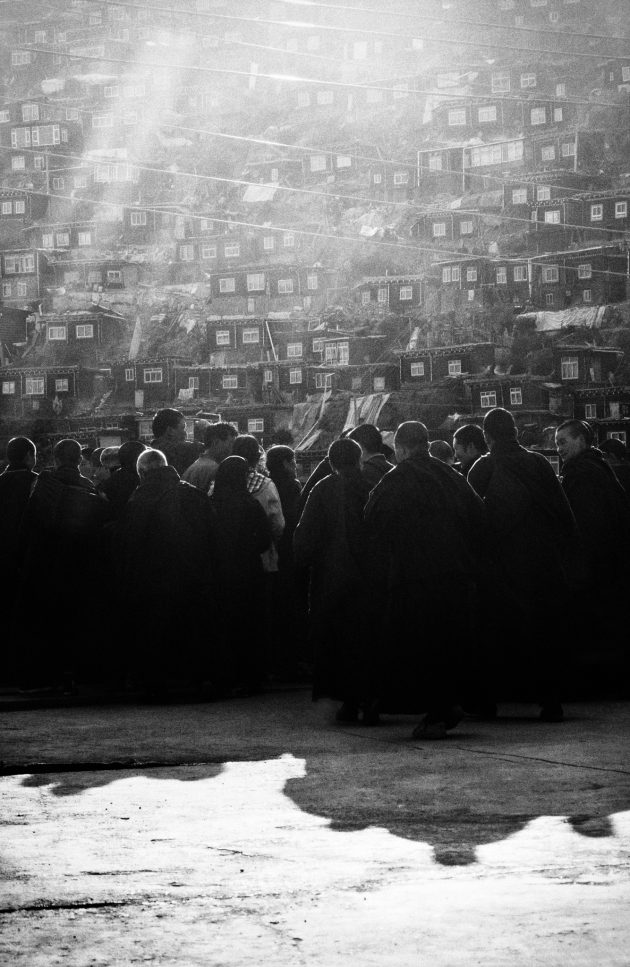 Khenpo Jigme Phuntsok himself was recognized, at the age of two, as the Reincarnation of Lerab Lingpa of the Nyingma School. He founded the Institute as an independent center for studies with less than 100 students. The number of students increased to around 8,800 in 20 years, including over 500 holders of khenpo doctorates in divinity.

In 1990 Khenpo visited India, and met with the Dalai Lama, to the alarm of the Chinese authorities, who feared “splittist activities.” In 1998 they made Khenpo responsible for the growing population of the institute and asked him to expel all but 150 of his students. However, he refused, denying any political motives. Pressure and surveillance was increased, and in 1999 the Sichuan provincial government demanded that the population of the Institute be reduced to 1,400. This demand was reiterated over the next few years, with a final ultimatum in April 2001. Khenpo asserted that it would be inappropriate to evict the students, because they were there only to study Buddhist teachings and would do no harm of any kind to anybody. In the following months around 7,000 students were forcibly evicted, and over 2,000 dwellings were demolished by Chinese “work teams,” supported by the People’s Liberation Army. Khenpo was taken to Chengdu, where he died in a military hospital in January, 2004.

Today, almost unbelievably, the situation seems to have been reconciled. Again more than 10,000 monks and nuns live there and the number is continuously increasing. The institute is currently considered to be the largest Buddhist Institute in the world—some sources estimate its population to be over 40,000. Right now the institute’s senior teacher is Khenpo Sodargye Rinpoche, who was born in 1962, ordained at Larung Gar in 1985, and gives lectures at renowned universities all over China, elsewhere in Asia, and the West.

Despite the vastness of this place it is still not marked on maps. It’s one of the wonders of the modern world—an impressive manifestation of devotion, worship and education. Still, I personally have the feeling that for spiritual growth quietness and solitude are essential, and this of course is lacking among such a large gathering of people. Nevertheless, if quietude is needed the monks and nuns can flee into the endlessness of the hilly landscape. While hiking there I saw many monks alone up the green hills—a pleasant interlude in spring or summer, but winters at Larung Gar can be extremely long, and bitterly cold. It was wonderful to see so many people devotedly studying the Dharma.

May this effort and blessing be of benefit and inspiration for the world.