[F]EW COUNTRIES APPEAR TO HAVE LESS IN COMMON with each other than Japan and Brazil. Consider only the woman in which each country is personified. The geisha is a figure of culture: exquisitely robed, accomplished in several arts, hushed in manner, and refined in behavior. The samba dancer is a figure of nature: gloriously unrobed, accomplished in only one art, exultant, and exuberant. The geisha is the consummate product of the highly inward culture of teahouses. There are no tea houses in Brazil. The samba dancer is the consummate product of the highly public culture of Carnival. There is no Carnival in Japan.

So it goes. If ever two countries would seem to be destined not to know each other, it would appear to be Japan and Brazil, and not only because they are thousands of miles apart and share virtually no common political, religious, or cultural history. The one country is an island; the other comprises half a continent. The most celebrated Japanese writer wrote haiku; the most celebrated Brazilian one wrote an epic. Japan comprehends itself as having been a distinct civilization for thousands of years; Brazil just celebrated the five-hundredth anniversary of its independence from Portugal. In hundreds of other ways, from its temples to its churches, respectively, Japan and Brazil are as different as sumo and soccer.

And yet, on a recent trip to Brazil from Japan with my wife, Eva, who is Brazilian, I noticed that the annual world sumo championships were scheduled to be held in Sao Paulo. What? Sumo? In Brazil? Why not? Immigration began at the turn of the last century. There are now at least 1,300,000 Japanese living in Brazil, not counting the uncountable Japanese who have intermarried with Brazilians, and whose children who would not be counted as “Japanese” in the Brazilian census. Take Ricardo, one of Eva’s relatives.

Ricardo’s great-grandfather came to Brazil without a penny to his name. He had owned a mine in Japan, but the government confiscated it during the First World War, and told him to fight or emigrate. Ricardo’s father was two when the family emigrated and began working on a farm. They saved enough money to buy their own land, build their own farm, and prosper. Ricardo’s father, Americo, still remembers his grandfather, who till the end of his days put on a white linen suit each Sunday to attend church.

Americo, a lawyer, appears to have continued the refinement of his father, from his love of cooking to his extensive experience of travel. He’s never been to Japan, though, and has no desire to go; Eva opines that Americo is the most thoroughly Brazilian Japanese she’s ever met. Recently the Japanese government got in touch with him, in connection with the mine. It seems the land could be returned. “Keep it,” Americo responded. “I don’t want it. Imagine going back to be slaves to those Japanese.”

To an American, Ricardo doesn’t even look Japanese (although Eva tells me that he does to Brazilians, who, however, don’t care about it as much as Americans would). When does one country cease in another? To Japanese, Ricardo might be an example of a Nikkeijin (Japanese emigrants and their descendents born abroad). To himself, though, he’s an example of a Brazilian, period, who reinstitutes — albeit in his own way — the difference between the two countries.

THE RELATIONSHIP BETWEEN JAPAN AND BRAZIL IS TYPICAL of a great number of countries today, which continue to have something to do with each other only because of what appear to be economic reasons. The relation is one-way. Japan needs Brazilian labor, with 222,217 workers registered, according to the last census, making Brazilians the third largest number (after Koreans and Chinese) of foreign nationals in Japan. Brazil, on the other hand, has no comparable need of anything to do with Japan. And yet the large number of Brazilians with a Japanese background means that Japan exists in Brazil (or in the state of Parana, at least) in all sorts of fugitive, unspoken ways. In effect, the two countries continue to abide inside each other with an unusual degree of intimacy but without sharing any comparable degree of understanding; Brazil simply has no resonance in Japan comparable to the scale or the depth of Japan’s resonance in Brazil. 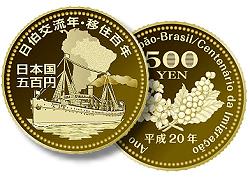 WHAT A JOY IT WAS FOR EVA to discover the magazine, Made in Brazil, some time after we arrived in Japan. That’s the title, in English, although the magazine is written in Portuguese, and jointly published both in Brazil and Japan. Intelligent journalism, at best, but very informative about a wide variety of subjects relating to Brazilians in Japan, ranging from items on the latest available technology to longer features on Buddhist monks. Plus, each issue is full of imaginative layout and glossy photos. Although we’ve never been able to figure out how most Brazilians who live in Japan can possibly afford to buy this monthly, we do. Of course, we’re not — in the Japanese valuation — Brazilians.

The oddest realization, though, is something more personal. The world of Brazilians in Japan — such as it is — is in fact more remote to us than Brazil itself; alas, most Brazilians in Japan live in a couple prefectures near Tokyo. Perhaps that’s why it’s so disturbing to see Made in Brazil in Brazil! Finding the magazine here exposes a sort of emotional logic that we had gradually come to unconsciously accept. It couldn’t have been articulated. Perhaps it couldn’t even have been known until now. The logic is as follows: Made in Brazil no more belongs in Brazil than, well, Brazilians belong in Japan.

IT’S THE 11TH ANNUAL “NIPO-BRASILEIRO” FESTIVAL! August 12th to 20th, at Acema, one of Margina’s largest private clubs! Eva and I hurry over early one evening with the fervor of first-generation immigrants from Gumma Prefecture. Before the dancing begins, we gain the cavernous food court, where, sure enough, there is sushi available right alongside the barbecued beef. Too bad we already had dinner.

Eventually the dancing begins. Eva takes a picture of some traditionally-clad women underneath a sign in Portuguese. The dancers are awful, out-of-synch even in a slow, stately bon-odori number. Another group is slightly better. The crowd, mostly Japanese, looks on politely. What exactly is the meaning of this spectacle? Is it as inert as the comparable samba staged by Brazilians in the Tokyo area, regularly reported by Brazilian newspapers available in Japan?

Far more enchanting is the commemoration of Japanese immigration to Brazil, in the form of nearly thirty display cases of various origami figures. Subjects include living in original homes on coffee plantations, raising chickens, staging sumo matches, displaying ikebana, and singing karaoke. The Japanese genius for the miniature! The scale of these displays is remarkably intricate and detailed. The sushi is fresh. The dancing is live. So how to explain why this origami display seems, well, not so much more authentically Japanese, but more expressive? Expressive of what? Of a culture that almost requires a moment of alienation — provided by the historical perspective itself — before it can be re-presented so imaginatively a mere spectator easily forgets that these tiny pieces of paper represent a real life once suffered and lived.

ONE SUNDAY MORNING EVA, her mother, her youngest sister, her nephew Marcelo and I are all transfixed by a television program about a family that left Parana twenty years ago for the Amazon, specifically the state of Rondonia. To me, as an American, the family resembled the Joads in their old truck, piled high with furniture, children, and dreams. Perhaps the major reason that Brazilians don’t emigrate to other countries is the presence of the Amazon — as distant to most Brazilians as, say, Hokkaido to most Japanese and yet with an enormous difference: the Amazon is a Hokkaido that still offers land for the settling and natural resources for the farming.

This particular family built a coffee plantation. It flourished. The soil is much better here than in Parana, explained the head of the family. Everybody worked hard. The house where the family originally lived is now a chicken coop! An old picture of the father throwing some coffee beans in the air appears on the checkbook of the area farm cooperative! The program has the family gather in its living room to see the video of themselves starting out from Parana. Several members weep. Had they become so successful that they had forgotten their origins?

We viewers, in any case, must not forget that Brazil is — once again — a country in the making; the Amazon remains the most obvious place in which the process is taking place (and no matter that it’s been going on this way for a hundred years — something the program doesn’t mention because its sense of history is restricted to the present). As recently as twenty years ago this family experienced in Rondonia the same moment that Japanese immigrants to Brazil experienced at the turn of the 20th century. This program captures the moment. After they get to where they’re going, and unpack the truck, the father turns to his son while they gaze at the jungle growth on all sides and declares: “This is ours.”