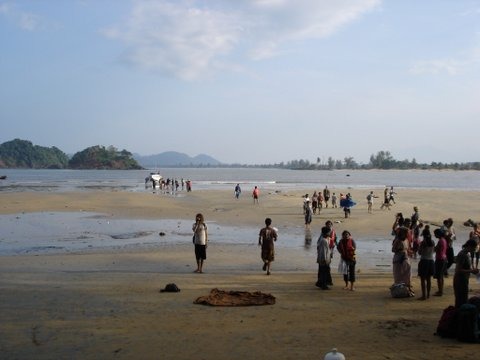 [I] was sitting at a café in Tokyo when a new colleague from my university leaned forward conspiratorially to ask, “I heard you survived the tsunami a few years back. Is that true?”

I looked around at the modernity of Akihabara. The noise and lights somehow seemed very far away from what I experienced. What to say about an experience that has put you in that random sample of people who can claim ‘survivor’ status?

On Christmas Eve 2004 I flew from Japan to Phuket, Thailand, to meet up with a good friend from graduate school who was holidaying in Thailand with his wife. We were staying on the Andaman Sea between Phuket and Ranong, a beautiful area near the Isthmus of Kra – that thin strip of land separating the Indian Ocean from the Gulf of Thailand. I had just started a new job in Japan and was thrilled to be heading back to the slower pace of Thailand where I had been an exchange student a decade before.

Just two days after my flight touched down an earthquake that registered 9.1 on the Richter scale triggered a massive tsunami. An estimated quarter of a million people died across the region.

Some two dozen lives were lost on the island paradise we had found. People I had shared a laugh with the night before, or a conversation minutes before the wave struck, disappeared forever and the lives they touched were turned upside down. Families were ripped apart in minutes.

My friends and I fled the approaching wave in a mad scramble up a dense jungle hill, and during the hours that followed it seemed that the world as we knew it had ended. The unimaginable power of the wave and the destruction it brought changed our lives forever. We spent a hellish night in the jungle with survivors fighting, laughing, crying and hugging one another. I spoke with men who had been carried out to sea and then spit back onto the land, battered and in disbelief. Wild and domestic animals, including brazen dusky langur monkeys, shared our crowded hillside space, scurrying over us as we futilely attempted to sleep. Worst of all was the crying of children, newly orphaned with uncertain futures. All this was real and yet the day before, completely unimaginable.

Perhaps the most unusual and strangely beautiful moment occurred shortly after the tsunami struck. I was still out of breath from escaping up the hill, when a very large domesticated male macaque, baring its incisors (seemed at least two inches long), came up to me and slowly and in an almost human gesture sat beside me, obviously terrified. A moment later a white dog appeared from the chaos below and sat down to my right. Between these two creatures I felt somehow comforted. There we were — three beings, all in awe of something much larger and mysterious than ourselves. As surreal as this scene was, the experience was one of the defining moments of my life.

Those 24 hours, spent on a nondescript hill that I owe my life to, come back in dreams and flashes of memory and then recede again into my sub-consciousness. The story of the tsunami is well known. But what did it mean to me? How did it change me? I still grapple with these questions.

Some years later, in an episode of The Sopranos, I saw Tony Soprano — with his hangdog face — speaking to his psychiatrist, after surviving a shooting by his uncle. He said, ”I appreciate that every day now is a gift, but why does it always have to be a pair of socks?” 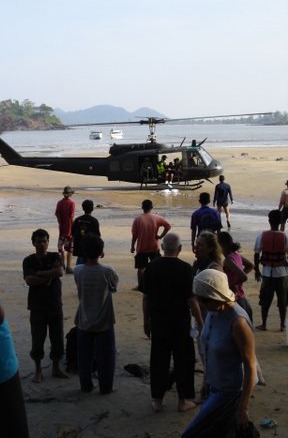 The initial euphoria — as horrible as that sounds, celebrating the fact that you are alive while so many others are not — fades and then there is regular life. There was no grand parade after the wave. The tourists who had survived simply returned home to their own countries, and the Thais began to rebuild their villages, towns and lives.

I took the train from the airport back in Nagoya, my leg bandaged and my mind swirling with terrifying images. It was winter; white flurries of snow against a background of concrete and urban sprawl. The other passengers were completely indifferent, focused on their cell phones. I had experienced something absolutely extraordinary — but now it was over, no one really cared.

On some days the gift is truly profound. It changed me in ways I am still discovering, I like to think for the better. On others, it feels like only “a pair of socks.” But even on those days, socks are not so bad. They keep your feet dry and warm and enable you to keep moving towards whatever your future may bring. Others should be so lucky.

Christopher Wyle is a teacher, writer and researcher based in Kyushu, Japan. He has lived, worked and studied in Asia for more than ten years and is originally from Berkeley, California.