One early autumn weekend KJ was very fortunate to be able to partake of an unusual, wonderful event being held at The Terminal Kyoto as part of friend (and cover lady) Hiromi Minako’s month-long exhibition of her extraordinary hand-drawn mandalas.

“There are few people in the world of craft who have made such an impression on me,” Hiromi says of Hirotomo Doi, a lacquer artist who also happens to be our host. Set out before him are a number of his own pieces, the purposes of which are to become clear as proceedings go along. There are places set for five in this tatami-lined space, not unlike one would see at a formal tea ceremony—but this is no tea ceremony. 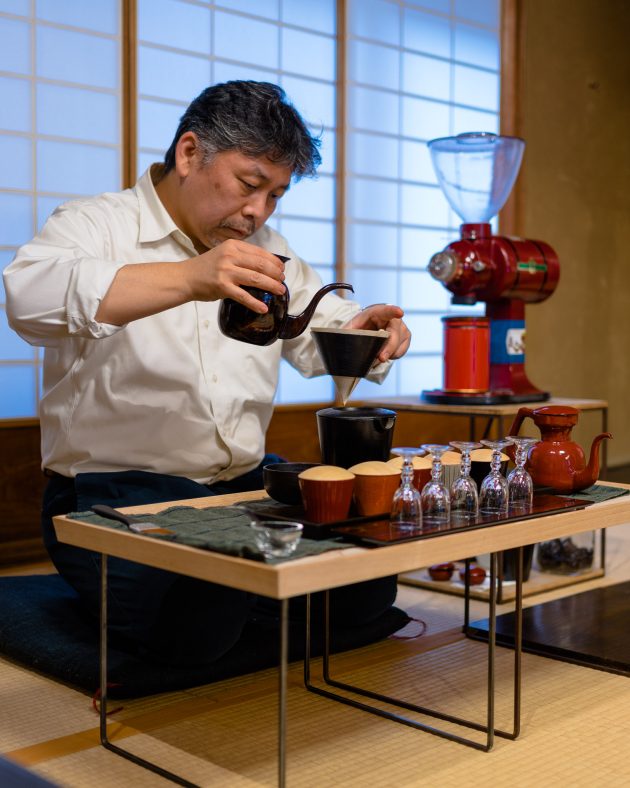 “People ask me: ‘why don’t you just start your own coffee shop,’ but I prefer this kind of pre-planned arrangement, which guarantees that the condition of the beans and all other variables are at their optimal,” Doi says of his self-invented coffee ceremony (which, by the way, is not modelled on the phenomenon in Ethiopia) which he has now been performing for small groups for the past decade. What we are about to experience, he explains, is actually only a condensed version of the usual: come to the next event and you will also receive a serving of sencha and a course of Italian cuisine too.

When starting out, Doi traipsed around the capital’s coffee shops to blind-taste as many brews as possible. It was when he checked back with the owners at the establishments whose coffee he was most partial to that he realized he’d stumbled on his favourite bean—at least three of them were using the same one. As Doi prepares them for us in an antique mill, and after heating the water to optimal temperature, in a highly exacting manner prepares our first course—a drip coffee. “Don’t soak the filter paper directly: the water should be poured from the center and allowed to penetrate outwards,” he insists. A solemn silence falls on the room, not unlike when the tea master takes a whisk to his bowl. 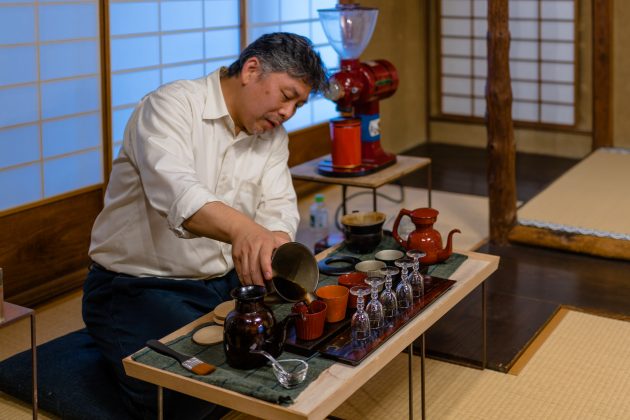 As we start to pick up the first, drifting aromas, Doi lends us some insight into his rather profound relationship with urushi (to be differentiated from other forms of lacquer found elsewhere in Asia, but all sourced from the sap of the lacquer tree family). Actually, Doi-san trained in Nihonga (the relatively recent term given to painting that draws on traditional Japanese conventions and using mineral pigments), his work shown even at the prestigious Nitten Exhibition. But some two decades later, he went to study lacquer in Wajima, a town of about 27,000 on the isolated northwestern Noto Peninsula, and a centre of lacquer-making in Japan for the past five centuries. For one thing, these particular wares we are using, Doi tells us, had to be dried over a period of about two years, since it takes that long for them to tolerate heated liquids. That’s a lot of patience. But there is more than one truth concealed within his remark, that “urushi chooses you and not the other way around,” for the stuff is highly toxic while in its still-liquefied state, and so only those who can stand it will continue the craft. “As for me, I only get an allergic reaction in advance of making a really important decision. I usually see it as an omen that I probably ought to step back and reconsider.”

Doi does not shy from experimentation, and this is most notable from the outset: before our first sip of coffee we are presented with a pitcher and a little plate with what appears to be an Alka-Seltzer tablet. As it turns out, this little tablet is a tissue that unfolds (or perhaps more accurately, grows upwards into a small tower) in contact with a little water, which we are meant to pour out from said pitcher. The design of rolling hills and a graces this little ceramic piece, which we wrongly presume to be overglaze painting, and has in fact been achieved by “rolling” the piece through lacquer that has been marbled on the surface of water—something none of us has seen before.

We can hardly wait for our first serving, which comes accompanied by dense, delectable pieces of yokan azuki bean jelly, served on a traditional wooden wagashi plate that has been embellished with splashes of an iridescent lacquer-silver mix. 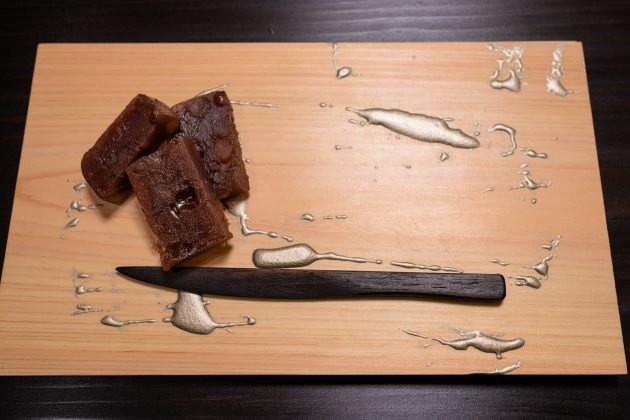 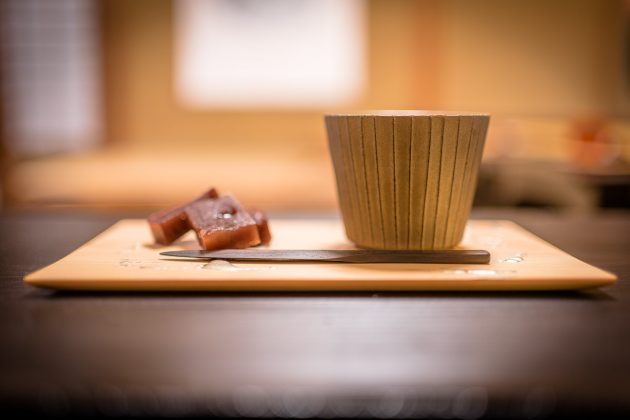 Our second serving is an iced Irish coffee. Here Doi-san uses a cocktail shaker in a bowl of ice to cool the brew before serving it in delicate antique shot glasses with a topping of cream. In a word: Divine. 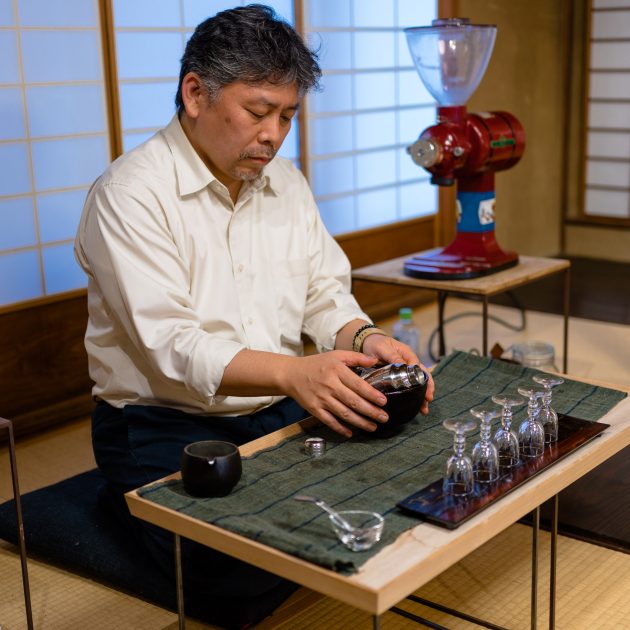 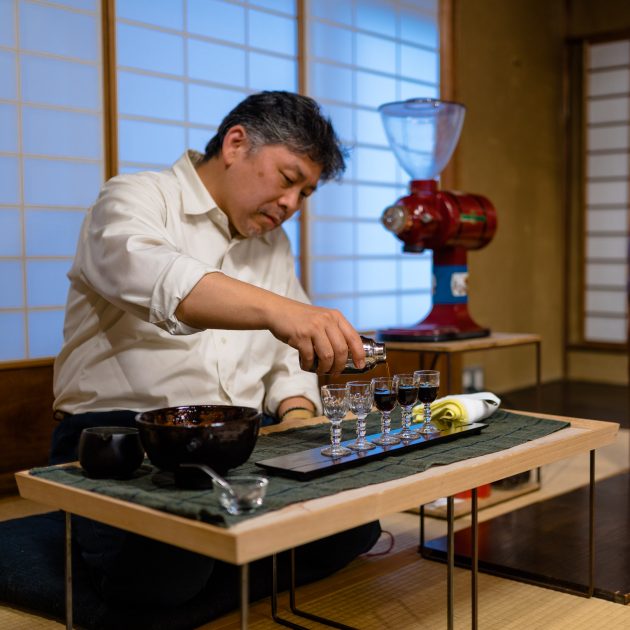 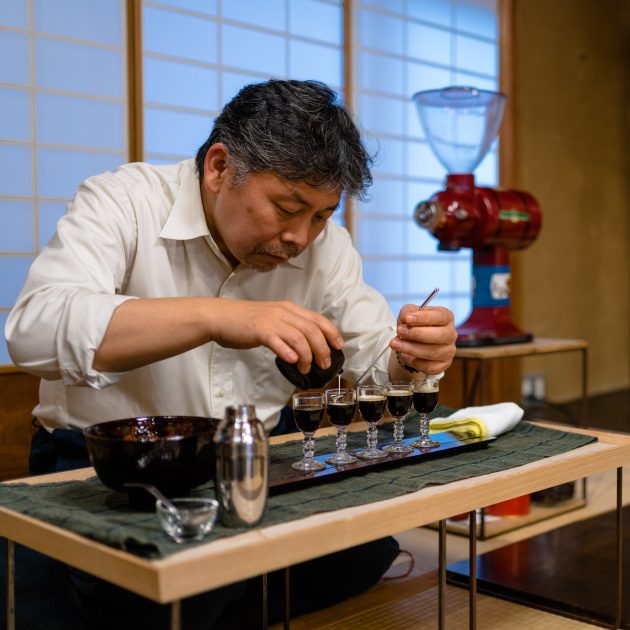 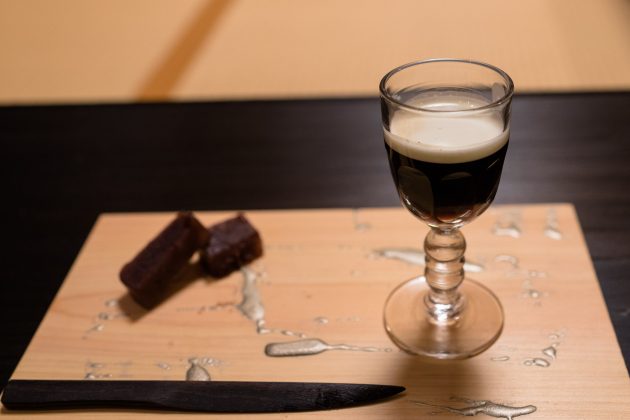 Those among us with a sweet-tooth are overjoyed when Hiromi-san graciously brings our final course to us: homemade vanilla icecream, with a small container with a portion of ground beans for us to sprinkle on top. “Think of it like Ben & Jerry’s Cookies and Cream flavour,” Doi quips. A wonderful way to conclude this experience. 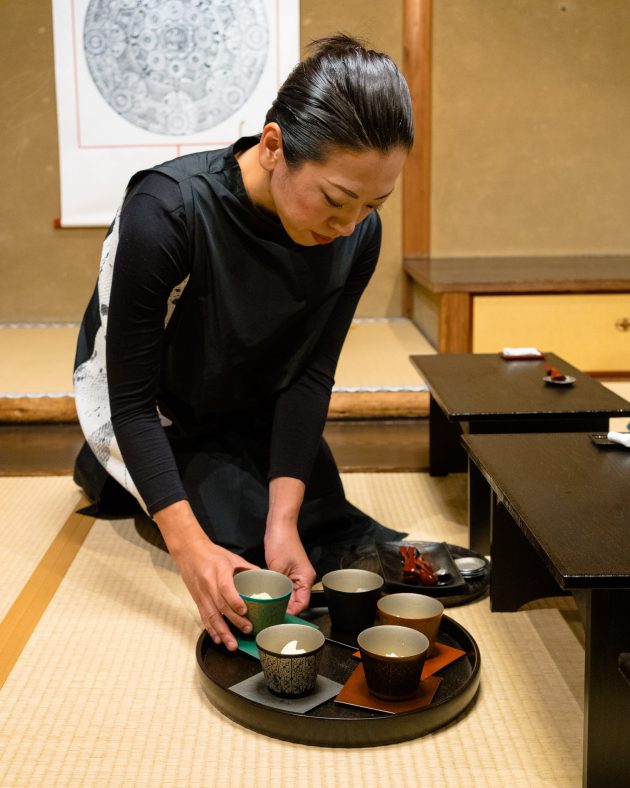 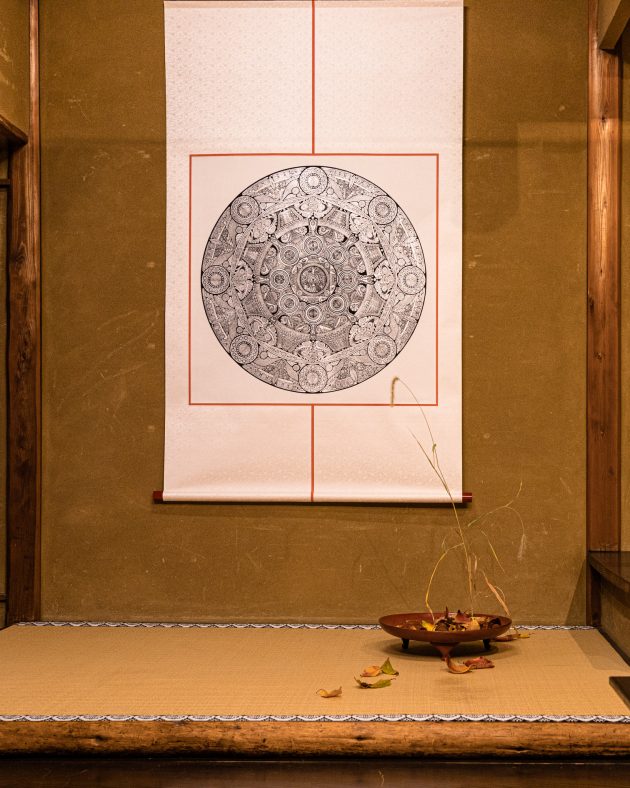 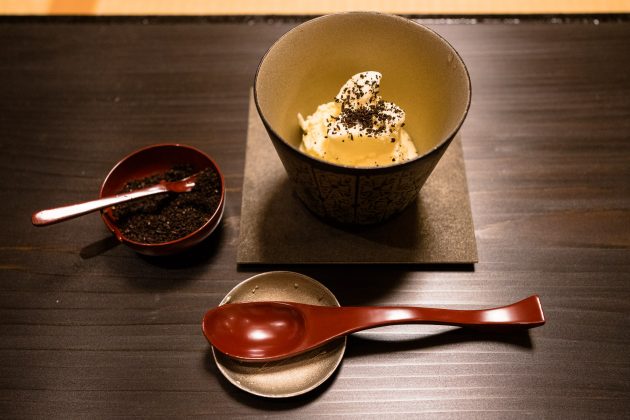