KJ’s Hirisha Mehta and Lisa Nilsson were hosted by Yukiko Reis at Biwako Visitors Bureau on an excursion of Otsu’s most important sacred sites, ahead of KJ’s Autumn/Winter issue: “Devotion.” 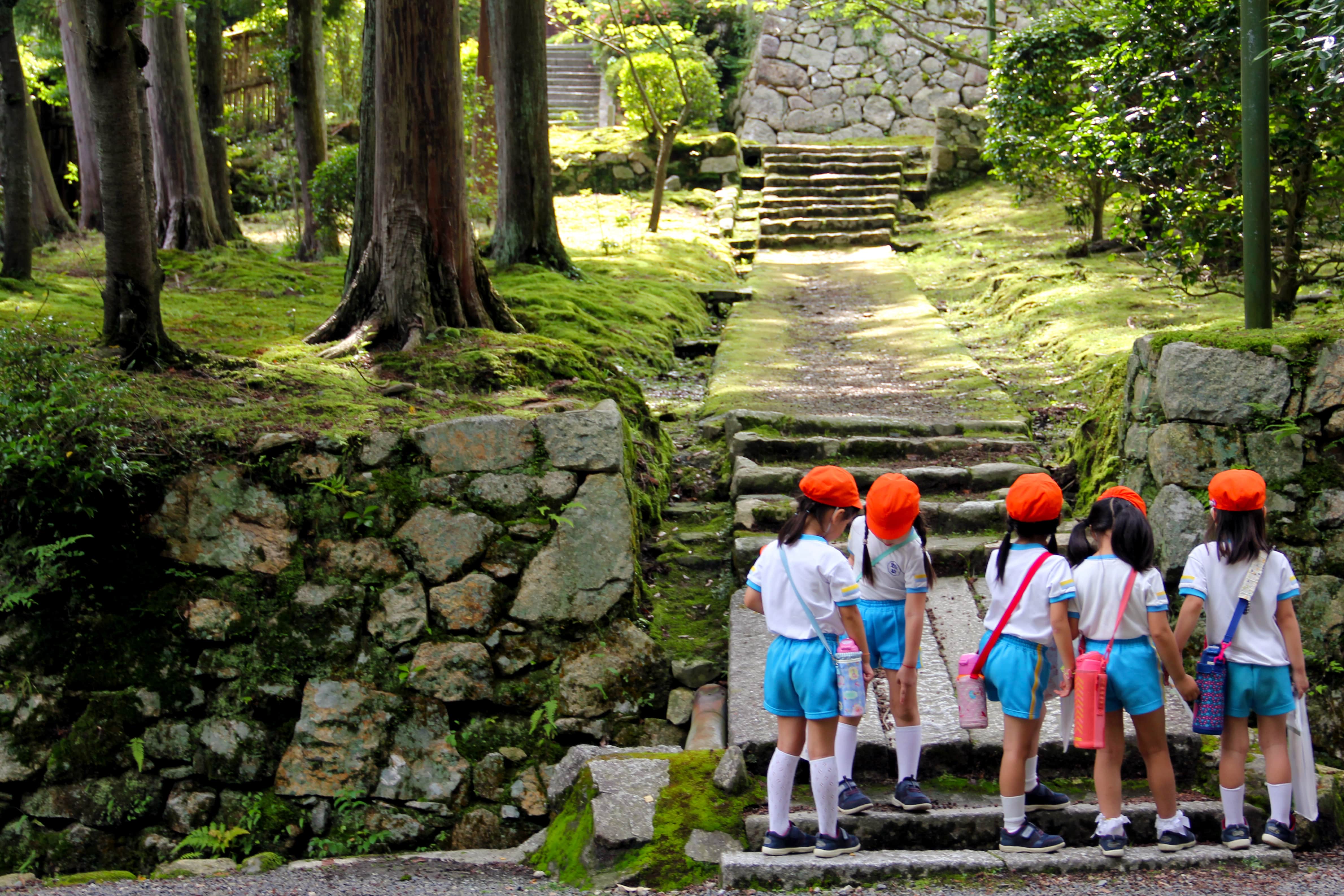 Situated on the south-western shores of Lake Biwa, Japan’s largest freshwater lake, Otsu is the capital of the scenic Shiga prefecture and the best starting point for further exploration of the region. Otsu translates as “big port” and serving as a key transportation hub for many centuries helped cement the city’s status as a prosperous center of culture, with many important heritage sites that may often be overlooked by visitors to Japan. Yet, Otsu is a mere 20 minutes from Kyoto Station! 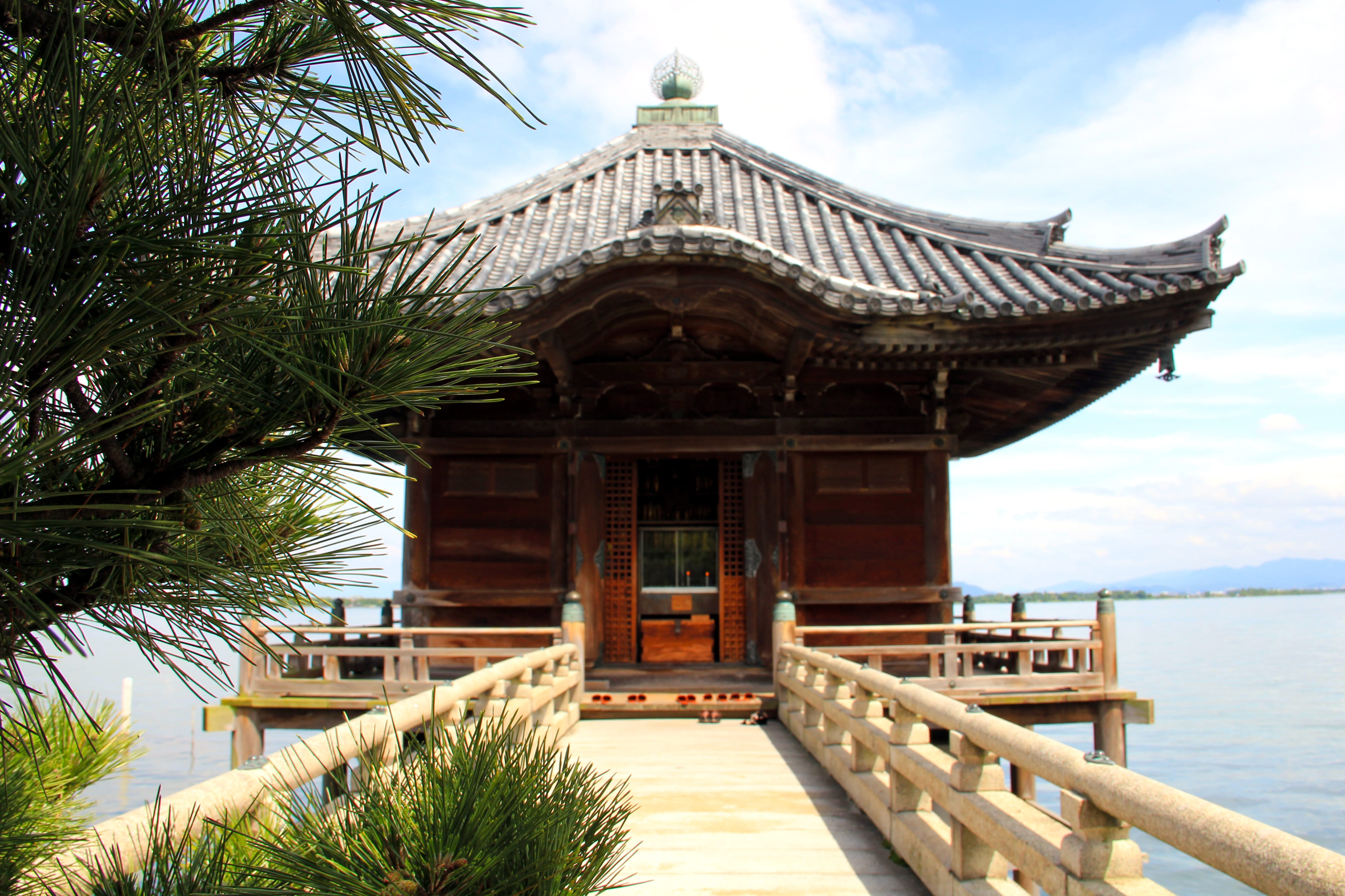 The unique spirit of Shiga became immediately apparent at our first stopover at the magnificent  Mangetsuji Temple, famous for its Ukimodo “Floating Temple Hall”, built on pillars out on the water. The location is breathtaking, framed by the vastness of Lake Biwa and a distant skyline all surrounded by verdant mountains. Legend has it that the Heian-period  (794 – 1185) monk Genshin spotted an unusual light reflected upon the surface of Lake Biwa every night that seemed to emanate from the sacred Mt Hiei. When he later went down to the water, he scooped up a golden glowing figurette of the Amida Buddha with his fishing net. In honour of this miraculous discovery he proceeded to carve 1,000 Buddha statues and created the Ukimido out on the lake to house them. Still, to this day, the temple is a place of prayers for safety and the successful pursuit of enlightenment. Although to a lesser degree in modern times, the lake has always been held in great reverence to the people of Shiga—the waters both nurturing livelihoods and bearing spiritual power.

That we were able to enjoy the dazzling and tranquil atmosphere of the temple grounds all to ourselves, whilst thinking of the hordes of tourists swarming the temples back in Kyoto, was simply the cherry on the cake! 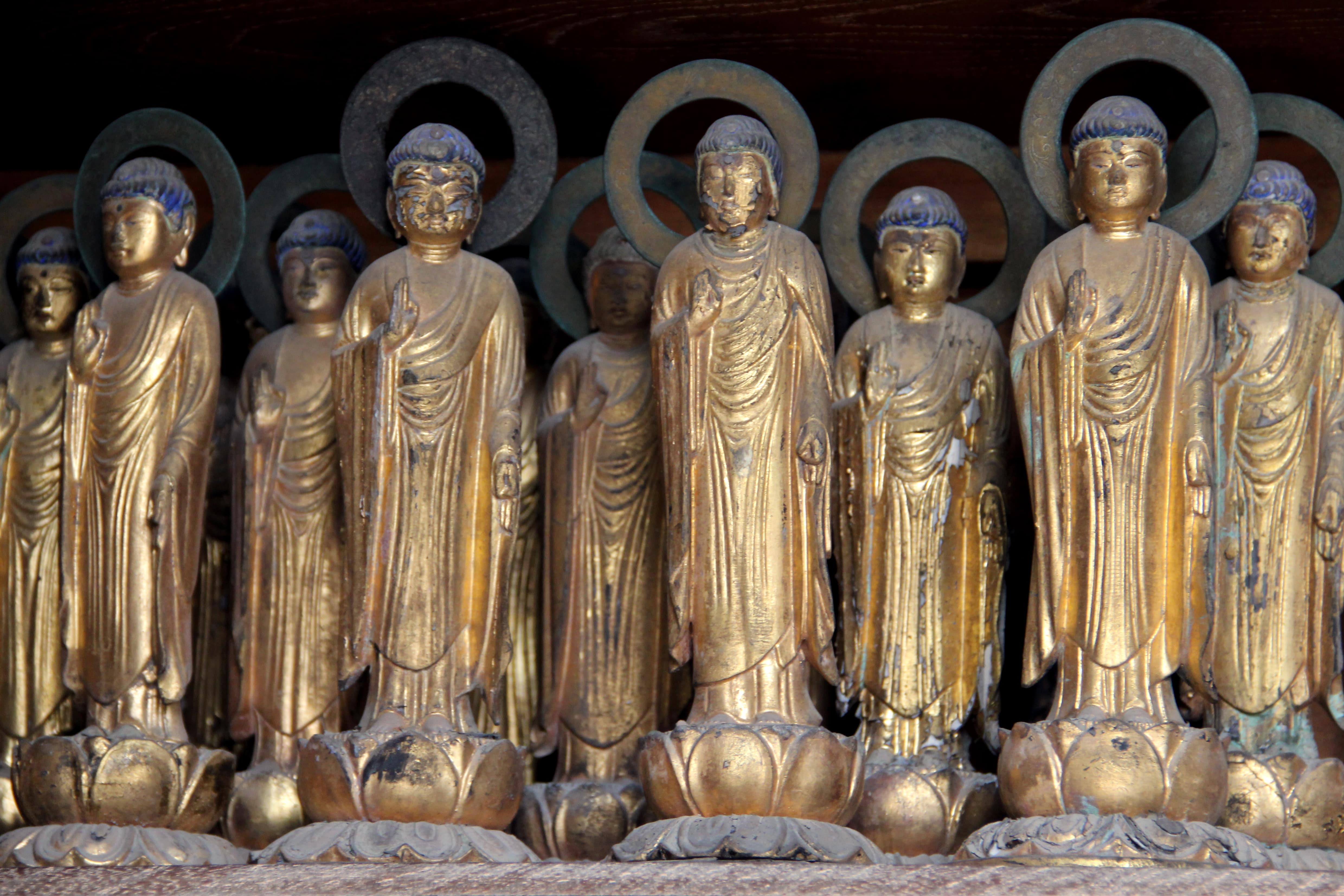 The Ukimido is home to 1,000 Buddha statues.

Next we made an hour-long stop at what is considered to be one of the four great temples of Japan, the Onjo-ji Temple. More commonly known as Mii-dera, or “the Temple of the Three Wells”. Home to more than 100 National Treasures, the temple ground is also often used as a setting for various period dramas and films. The name comes from the sacred water spring Akaiya by the main Kondo where, it is said that, three emperors of yore all were given their first bath as infants. The temple bell, which is known for its highly reverberative clang, is said to been brought back from the underwater Palace of the Dragon King and then later stolen by the formidable warrior monk Benkei and single-handedly dragged up Mt Hiei where he attempted to strike it. But rather than ringing, the bell moaned and cried, “Miidera! Miidera!” Benkei, enraged, tossed the bell down the mountain. Today, the cracks and the scars on the bell, is said to bear witness of that event and touching the bell will impart worshippers with the strength of Benkei himself. 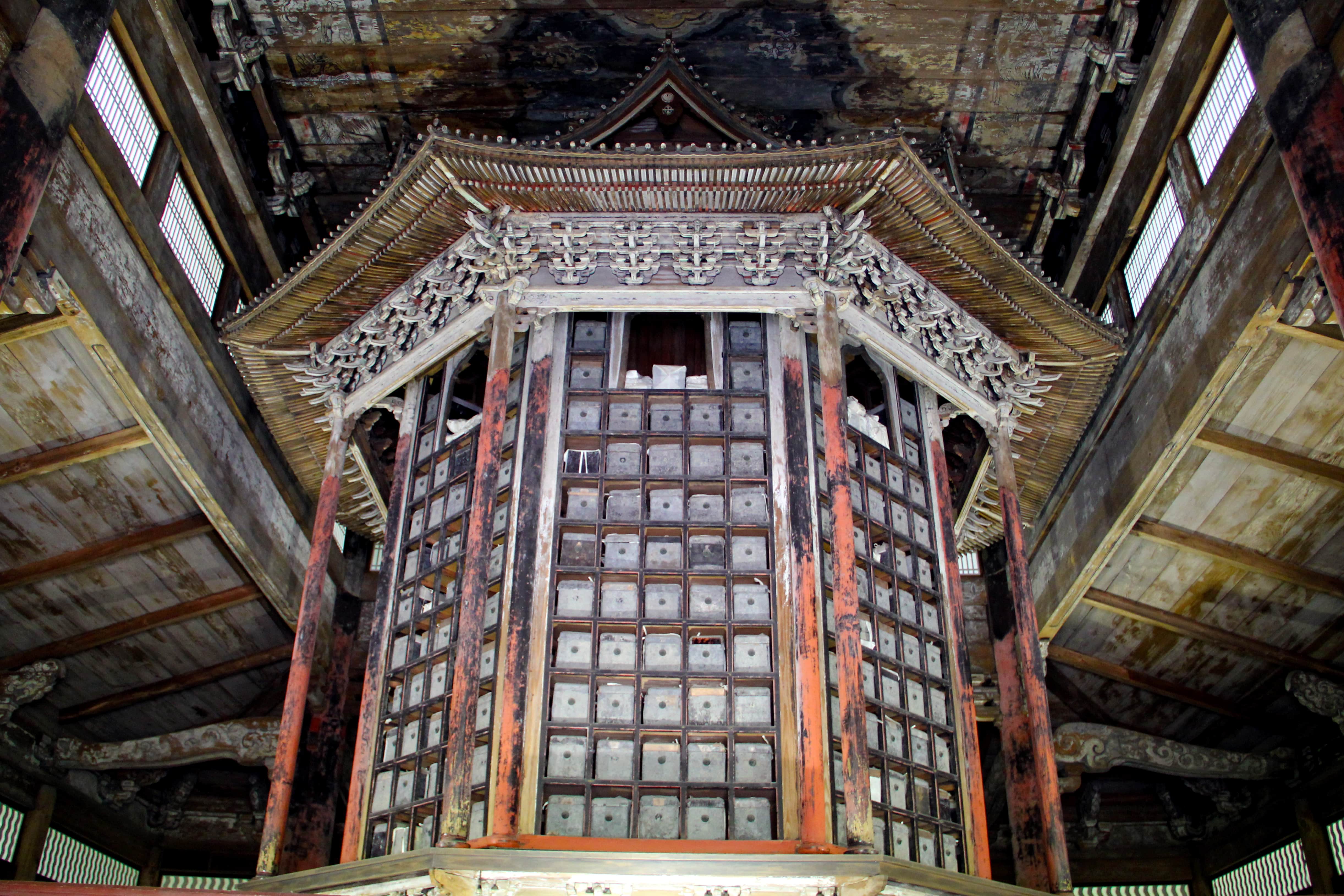 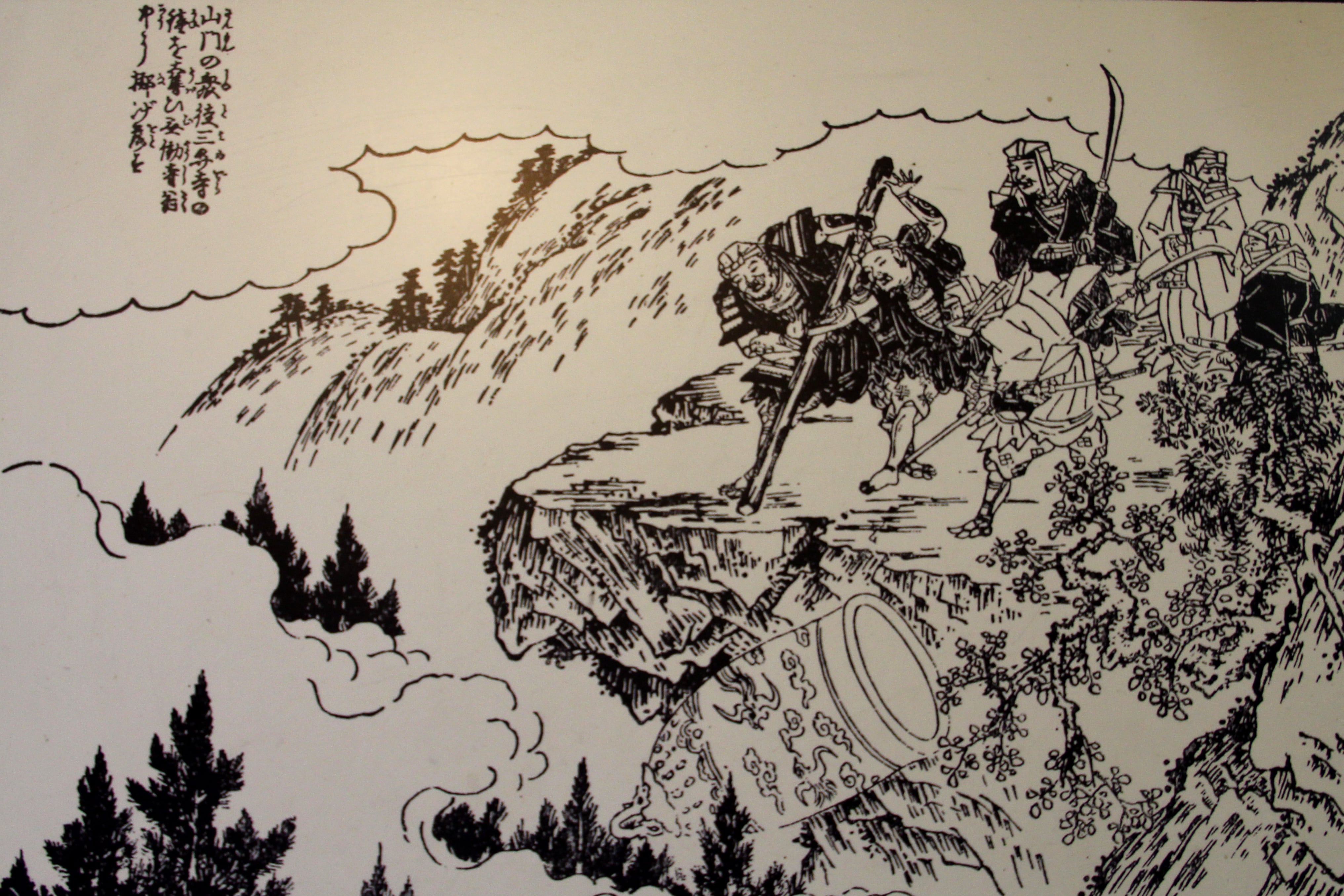 The warrior monk Benkei throwing the stolen temple bell down from Mt Hiei in rage.

For us, Ishiyamadera “the stone mountain temple”, was the third stop on this very pleasurable day tour, but it is only the 13th location along the Saigoku Kannon Pilgrimage route, that connects a total of 33 Buddhist Temples around the Kansai region. Throughout the wide temple grounds wollastonite[1] rises as a natural monument, building a foundation for several pagodas and temples. A spellbinding alley of Japanese maple trees lures you further in from the gateway, creating a dense leafage tunnel of seasonal colour. Whilst climbing up the moss covered stone steps to higher grounds, it is easy to understand that the famous author Murasaki Shikibu once found inspiration for her globally famous masterpiece “The Tale of Genji” here, whilst gazing at the reflection of the harvest moon on the waters of Lake Biwa. 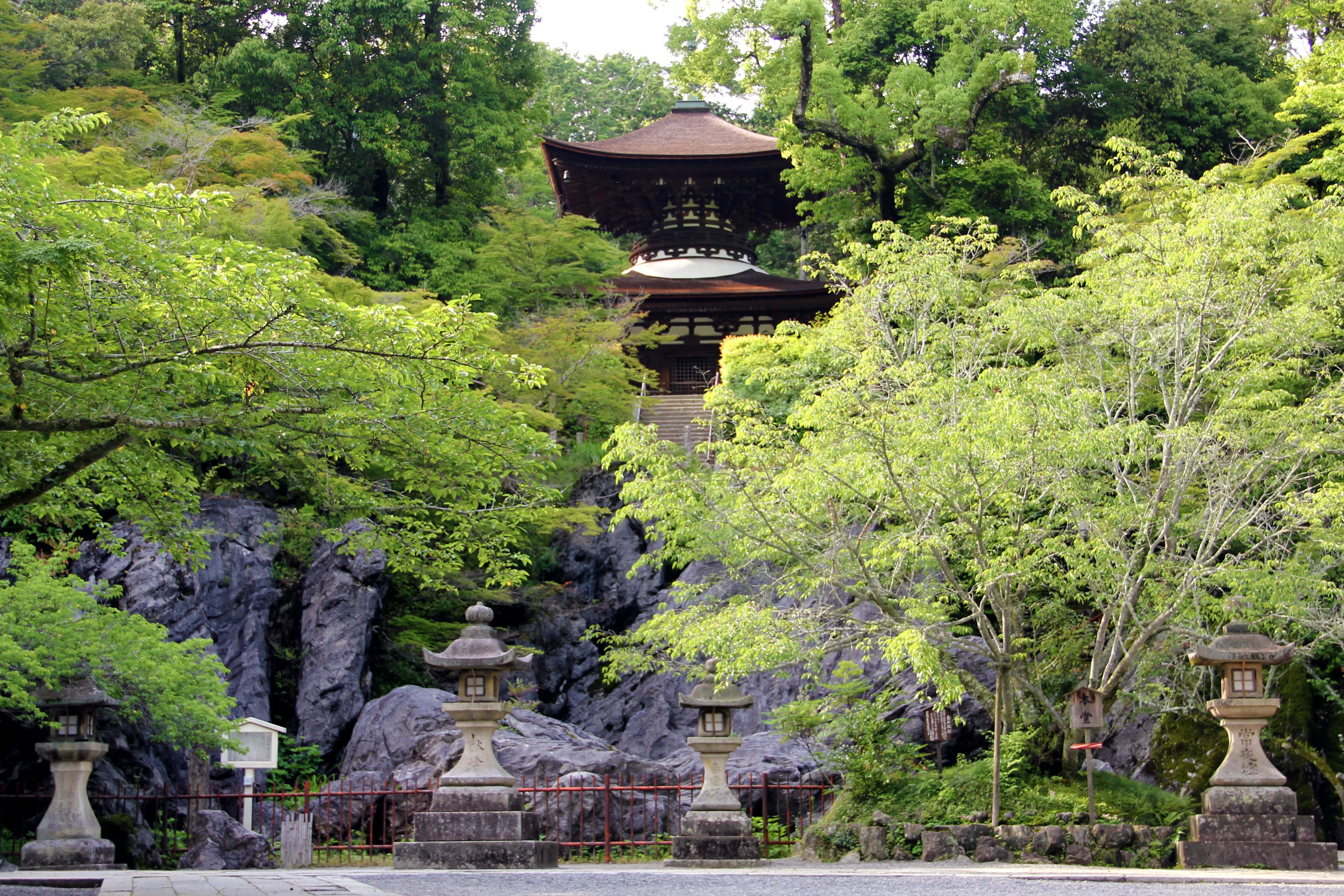 Built in 1194, this two-storied pagoda is considered to be not only the oldest but also the most beautiful pagoda in Japan. 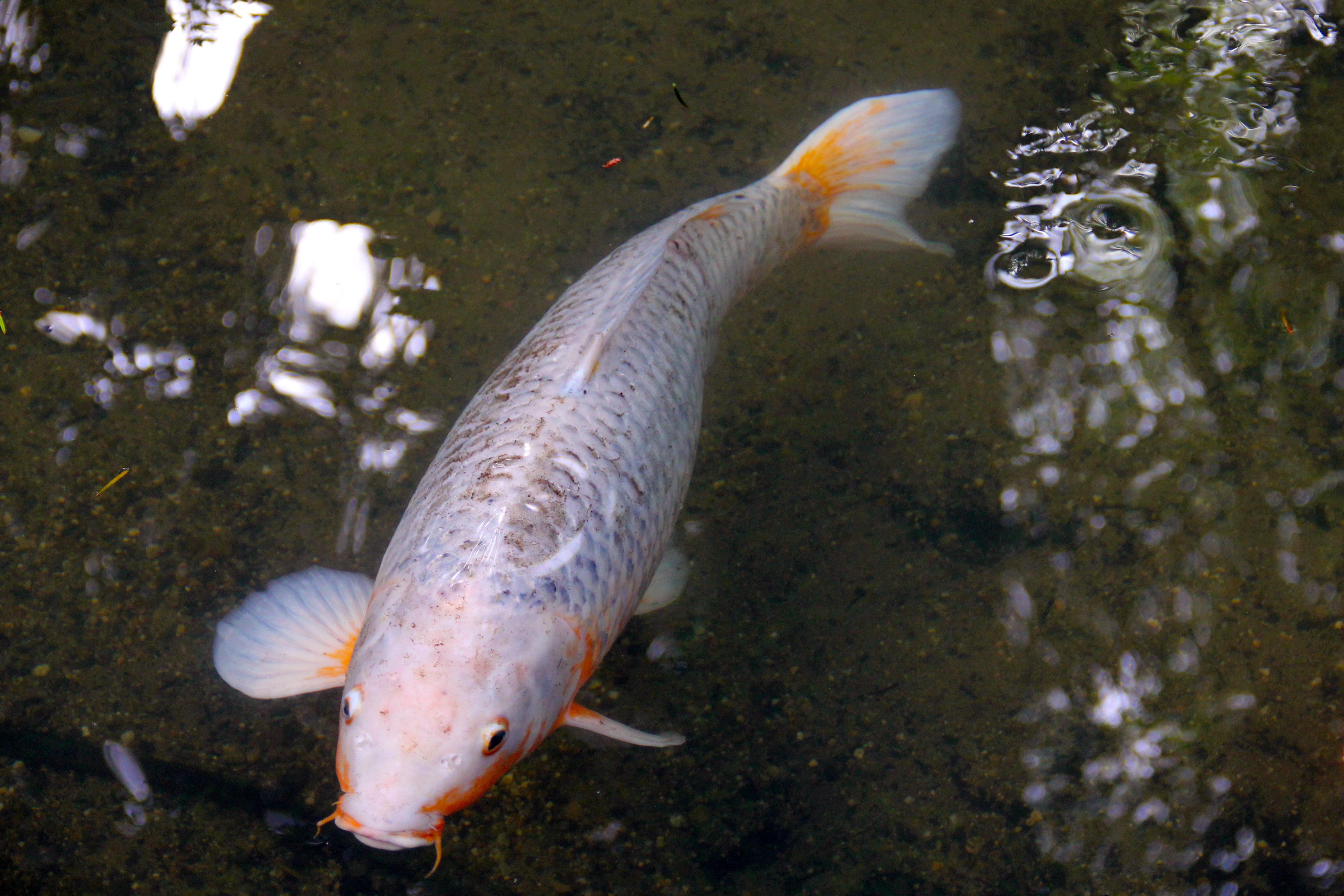 A natural and most beautiful pond filled with Koi fish at the Ishiyamadera temple. 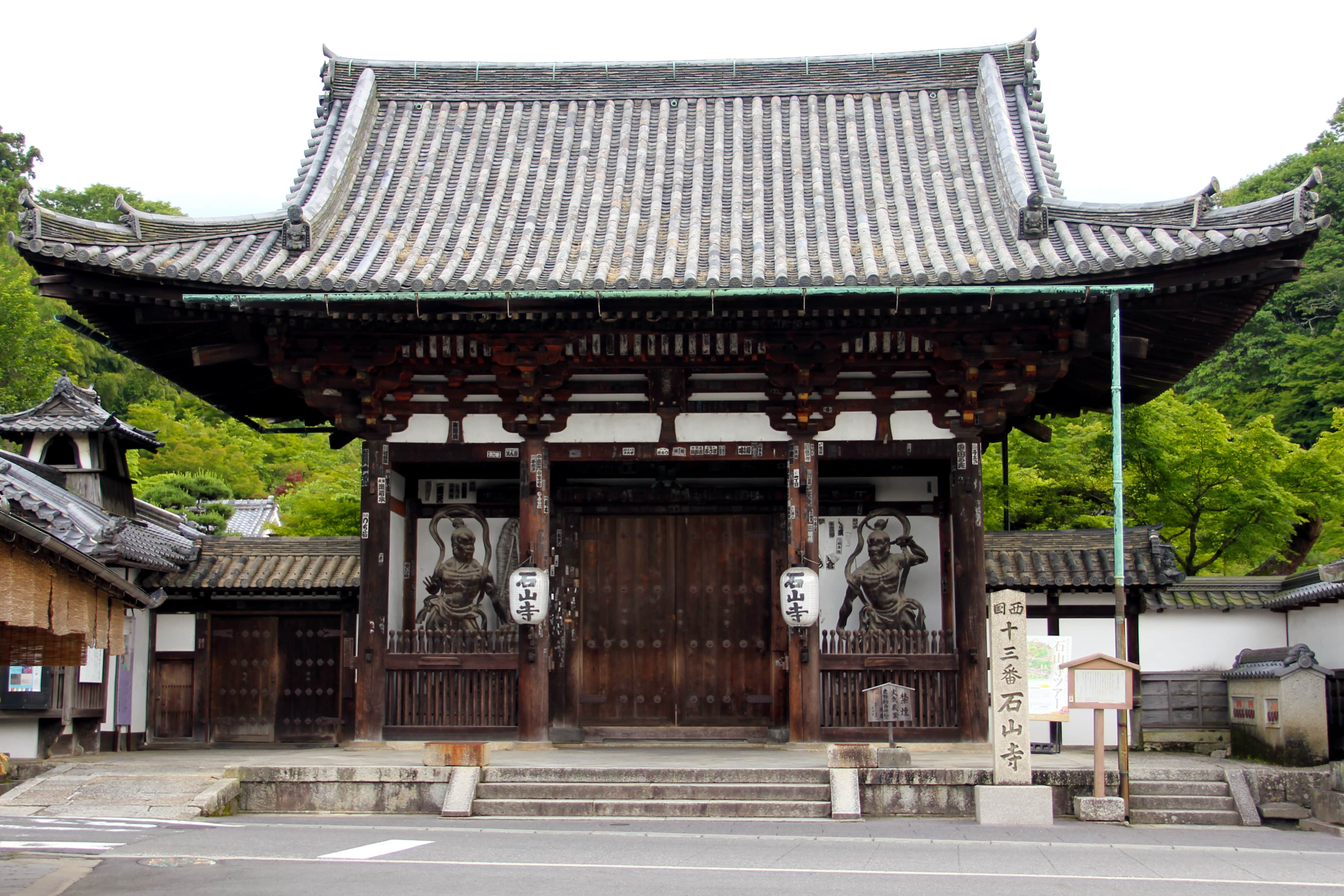 The impressive gate to the historic Ishiyamadera temple. 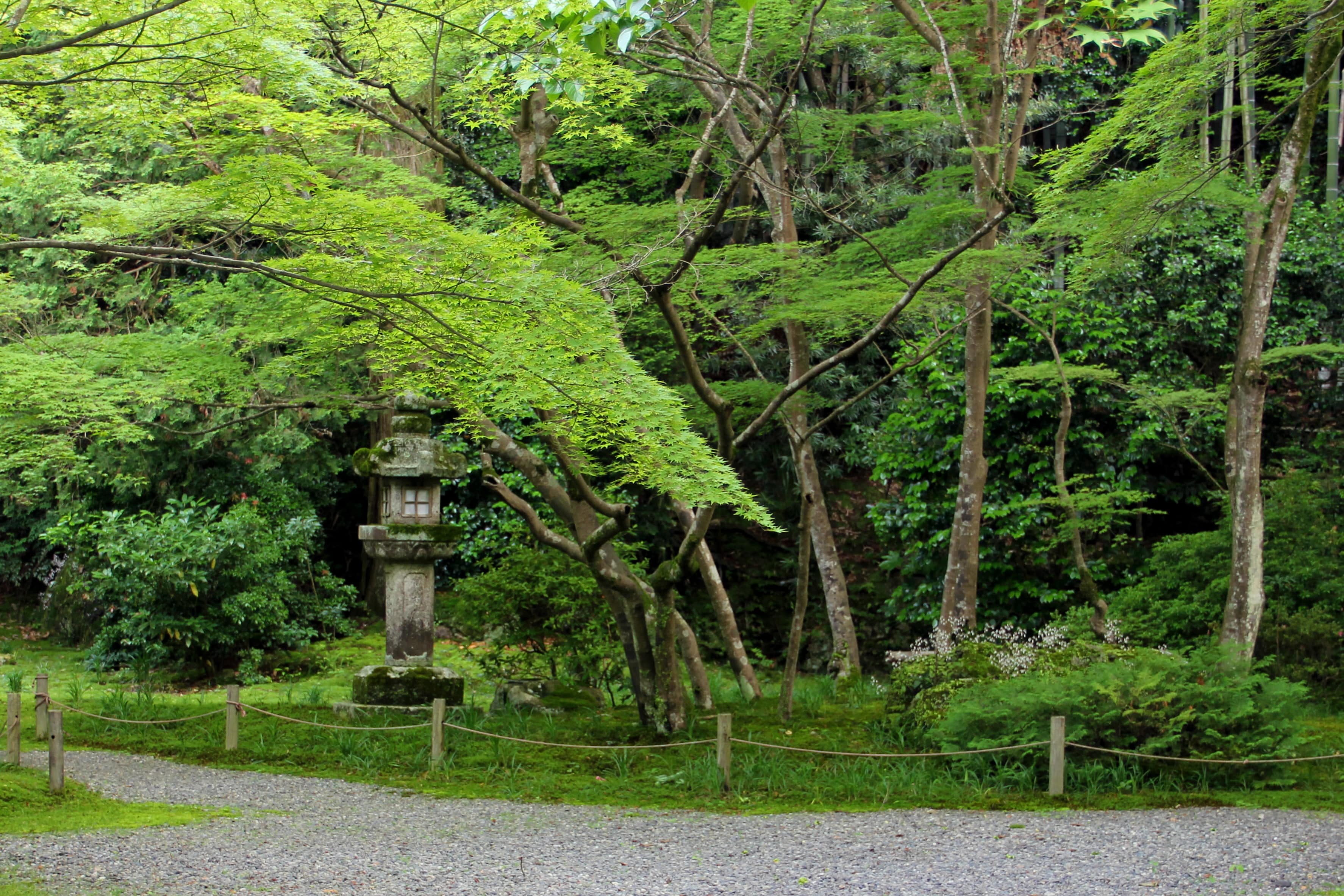 Every corner of Ishiyamadera is enshrouded by the most stunning natural scenes, making you forget about the world outside of the temple area.

These spectacular glimpses of the scenic prefecture of Shiga only left us eager for more, and so sure enough it won’t be long before we at Kyoto Journal will pay another visit, exploring more unique spots together with the wonderful team at Lake Biwa Visitors Bureau!

[1]Wollastonite (CaSiO3) is a silicate mineral that occurs in metamorphosed carbonate rocks.

All photos by Lisa Nilsson