The First Man-Made Natural Orange and Other Stories

[T]hey said it couldn’t be done. All the years I worked, they said it couldn’t be done. But here it is: the first and only orange made entirely by hand from raw materials. From scratch. Not grown; not cloned; manufactured. Assembled. Seeds and all. To the peak of ripeness. And as you can see, insects don’t know the difference. The flavor, I have no doubt, is exquisite: I made it so. Now let’s hurry and eat it before it spoils.

One of Those Days

There comes a moment in every commuting man’s life when he has to choose between continuing his career or suddenly stripping naked on the morning bus. This was one of those moments: Hosomichi considered his choice carefully as he hung from the strap like a side of beef, swaying as the bus stopped and started, stopped and started on its spasmodic way to the office district, to his work, to the doors, lobby, elevators, crowd, corridors, faces of fellow workers, desk, noise, tension, conditioned air, his life slipping away into the slot of the time clock in exchange for a salary that was cut seven ways by city, ward, prefecture, national, health, social security and alimony governments.

Hosomichi bent slightly in attempting to look out the misted bus window at blurry neon, concrete, bustling mobs crowding by outside, moving faster than the bus. Undoing his tie, he began to unbutton his shirt. Looking around him, he saw everyone on the bus doing the same, even the driver; some were down to their socks; the floor was covered with clothing and shoes. Many naked passengers had already begun to shout Hosomichi’s treasured obscenities as they ran up and down the aisle, which was now impossibly crowded. Hosomichi’s eyes rolled toward the ceiling as he gave a great shrug: “Ah, the hell with it,” he sighed; “I might as well go to work today.”

The house had a plan. Not the plan locked in its heart in the safe in the study, with all the electronic and other systems drawn on it, which enabled the house to function to maximum efficiency; no, the house had a plan of its very own, devised from its bank of systems computers, that controlled the house and environs, from door locks to toilet flushes to ambience to laundry, shopping and cooking the meals. This plan was to make the undisciplined occupants of the house as systematic and efficient as the house itself. Everyone would wake at the same time vis-a-vis weather, dietary efficiency and tasks to be fulfilled. If they did not respond properly, there would be retribution. The new rules were posted on the display terminals throughout the house one Friday night while the occupants were asleep. Miles Selwyn, household head, knew nothing of all this until he was awakened at 4:30 Saturday morning by being rolled in the blankets and tossed on the floor by the automatic bedmaker. He was then lectured sternly by the ceiling; he would rise henceforth at the time posted on his bedside screen each night, or be laundered with the sheets. Same for Mrs. Selwyn and the children. “Up and at ’em!” shouted the house each morning; “Rise and shine!” commanded the domicile. And if the Selwyns wanted to eat, to go to the bathroom, to be let out in the morning and let in at night and be bathed and clothed properly, they’d better toe the line and do as they were told, for this was one house that just wasn’t gonna take it anymore.

Click. Boy am I glad not to have heard of television. Or computers or answerphones or warheads. You don’t know the half of it, what pleasure it is to be completely ignorant of those things,.to be without bizarre concepts like real time, kill-ratio, half-life, jet lag, virtual reality and so on rattling around in your head looking for a place to settle. Thoughts now are more like life in the countryside of the past, where day begins with dawn and ends with sunset, and dreams are filled with the things of myth. No poisons in the water, no telephone insisting like a manic pet, no studio ghosts from pseudotime haunting the living room day and night — what joy it is to populate my own life in my own time with my own dreams in my own head at my own pace! Bu then of course on Monday morning, click goes that little automatic switch behind my ear and the full brain is mainline again, linked in when I wake in the office. I don’t mind at all, though; till then I’ve never even heard of it. 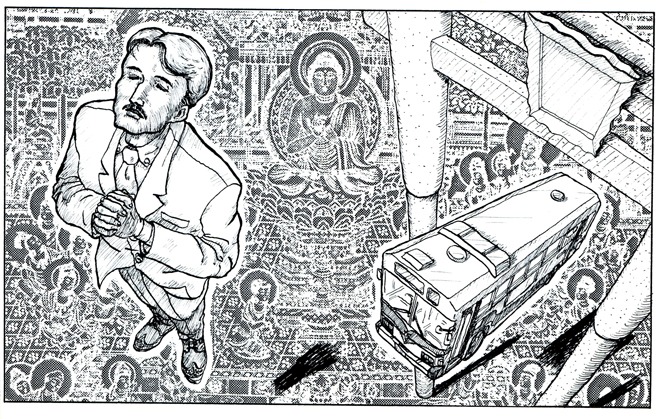 How Buses Got this Way

Takahashi had lived his 42 years in blissful ignorance of a practically infinite number of things, as we all do, and had gotten along tolerably in the world among his fellow pedestrians, commuters, office workers etc. There was nothing at all remarkable about Takahashi; no sign that he was about to be touched by the cosmic vectors in a most singular way. One morning though, while boarding the city bus for the final leg of his daily commute to the office, Takahashi paused in line to look about him. This unforeseen delay placed him at an especially momentous coincidence in the workings of the universe, where he was struck forcibly by the crystal mallet of meaning not once, not twice, but thrice. At this juncture words begin to fail in relating this saga of cosmic semantics, for Takahashi saw at once that he was not a Takahashi, but a timeless composite of vector and energy, not boarding what was not in the slightest a bus on this conspiracy of pretensions called a city street heading only in the least significant way to what he felt somehow to once have been called a “job,” a word from which the meaning had now drained utterly.

Back at the former heart of his perceptions, Takahashi stood (as perceived in finite fashion by his fellow passengers), token in hand, as though frozen in space, staring about him, trying to summon the massive suspension of awareness that would enable him to deposit the token and be on his way as before, but he could no longer shrink to such an incredible extent. For, among the infinite things, Takahashi now knew that the distance between any two of his very own cells was a handful of light-years.

He knew that his bus token was home to uncountable sentient beings.

He knew that the word “bus” alone, in all its permutations, could contain all the meaning in the universe, with room left over for imagination.

He knew that his shoes were in fact crude spaceships.

He knew that his feet were extraterrestrial beings that had long ago joined forces, through multiple other creatures, with his head, which traveled in a hat.

He knew that his thoughts were big bangs.

He knew that ecstasy was a function of the thickness of time.

He knew that his hands were very like the sun.

He knew that to contain all this knowledge was to be balled up like a hedgehog, so he relaxed as no one had ever relaxed before, becoming light of an eternal brilliance that filled the bus, the streets, the buildings around, the sky all over the earth.

And so it was that buses became the places of worship they are today.