An American-born Australian, Pulvers directed a film in 1991 for producer Araki Seiya, whose most recent project. Shi no Toge (“Sting of Death”), won a prize at Cannes in 1990. He has scripted the next Oshima Nagisa film American Lovers, about Hayakawa Sesshu, a Japanese star in the early years of Hollywood, and is writing a screenplay about Lafcadio Hearn. His most recent novel is Hinomaru no Shikakui Taiyo (“Japanese Flag With Square Sun,” Shuei-sha 1990) 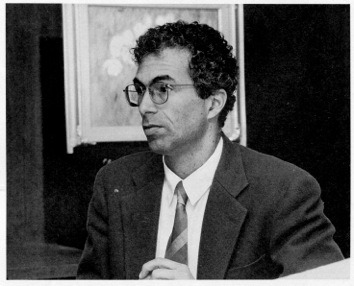 When I arrived in Tokyo in 1967 after studying in Poland, I had only $300 left; I even had to cash in my return ticket. I was 23 and I didn’t know what I was going to do. Fortunately I had an introduction to a professor at Kyoto Sangyo University, which I actually thought was in Tokyo. I came down to Kyoto on the train, rented a little house by Midoro-ga-ike, and started writing short stories. I’d gone to Poland to study agricultural economics, but I went to theatre every night. That somehow went into my imagination. In late ’69 I went to Terayama Shuji’s Tenjo Sajiki, still in Shibuya at that time, and saw his play Gari-gari hakase no hanzai — The Crimes of Doctor Gari-gari, rather than Caligari. (Gari-gari means greedy, chomping, all sorts of things.) It was a parody of German expressionism. I was very moved by it, and went home and wrote a play called Gari-gari fujin no kanzen hanzai, “The Perfect Crimes of Mrs. Gari-Gari.” It was translated and published in Shingeki magazine in 1970. There was a group here called the Kyoto Drama Gekijo, run by a man named Hayashi, that did plays, very good plays, upstairs in a Gion gallery called Ushio. I went to him, and to the Kurumi-za (I called them the Crummy-za), who are still around. But no one was interested in a young untried playwright and a play about a woman who hijacks a cosmetic counter. So I kept on writing.

In the late 1960’s there were some real characters in Kansai. Ivan Marich, when I met him, was a bartender in Gion. He spoke fluent Kyoto dialect, and Russian. His father was a Yugoslav who had fled from Vladivostok after the Russian Revolution. Ivan grew up here and did all sorts of jobs for the Occupation, and became a millionaire running a cabaret on Kiyamachi for American soldiers. Then he lost all his money and went to Korea. He later emigrated to Sydney and became the floor manager of a famous department store. There were still remnants of the White Russian community in Kobe. A guy named Sasha Besher put out a newspaper called the Shinjuku Sutra, for which I wrote an article in… was it 1967? Something about Gogol, if I remember. He was only eighteen or so. It lasted one issue. He went to America and founded the Chicago Free Press which actually put out Sato Hiroaki’s translations of Miyazawa Kenji before it folded. Professor Konrad was still around, the first translator of haiku into Russian (in 1903).

Right here in Kyoto, behind the city hall, there’s a beautiful 19th-century Russian church, with a dome, and incredible altar paintings. It’s one of two wooden Russian churches left in Japan, and there are two painted icons. In Fushimi there was a camp for prisoners during the Russo-Japanese War, and two of the prisoners painted the icons. Last year I wrote a novel, set in Kagoshima and Tohoku; the inspiration for that came from those two icons.

Russians were not only here learned Japanese fairly fluently by then, and I thought I might learn Chinese. I only stayed a week, but met all the Russians who had left Shanghai. A man named George Eisner ran the Astoria Cafe — I doubt it’s still there. I remember guests reading Russian emigre newspapers upstairs. There was a Polish lady who hadn’t spoken Polish for thirty years. And there were lots of people from Central Asia, Xinjiang…

After five years in Kyoto I left to teach Japanese in Australia.
My first book was On the Edge of Kyoto (1969). My novel Three Goals to Nhill (1986) takes place half in Kyoto and half in the Australian Desert. It’s a mystery which spans the era from the Occupation until “now.” I was not particularly interested in the aesthetic side of the city. I love nature, and I love to a live in a clean environment; I like the temples and gardens, and I still go to them now. But it hasn’t provided me with anything more than a backdrop. For many years I rejected any connection — in terms of my imagination or in terms of something concrete — with anything ancient, or even old. I simply have very little interest in anything that happened before the year 1900. Sakaguchi Ango’s comment on the burning of Kinkakuji — that it should be replaced with apartment buildings — appealed to me very much. Japan looks like it’s wedded to its past, but it isn’t at all. It scraps the past, as quickly as its made, leaving the less talented people to pick up the scraps and make them into some kind of orthodoxy. It’s continually redefining itself. That has been an impediment in really understanding a lot about Kyoto. Not about Japanese art or aesthetics, they speak for themselves. A tea bowl doesn’t need any philosophical backing to prove that it’s beautiful.

Sakaguchi had a famous dialogue with Kobayashi Hideo [a celebrated literary critic], in which Kobayashi said something like Bi ga aru no de wa nakute, utsukushi mono wa aru. Bi de mo nakute…. and went on into one of
these incredible jabberwockies, ridiculous arguments about what “beauty” was. The dialogue goes on for a whole page, and at the end Sakaguchi just says atarimae (“sure”)!
After working as assistant director on Merry Christmas, Mr. Lawrence I did come back to Kyoto, and I think I’ve been lucky to live here —just to see how phoney the Japanese reliance on the Kyoto tradition is, especially for people who don’t live the myth. Had I not lived in Kyoto before, and made friends in the arts and the theatre and so on, I would have probably bought it myself.

All the talk about Kyoto wa nihonjin no kokoro no furusato [Kyoto is the home of the Japanese soul], the home of aesthetics… That may be so for traditional theatre, but certainly not for modern. Tokyo friends couldn’t understand why I was moving back to Kansai. I couldn’t explain it, except to say that it’s a nicer place for my family to live. I wanted to get out of Tokyo, so that I could go back to Tokyo. I found that among people who knew Kyoto, Kyoto was actually despised. And for the right reasons. Kyoto has been resting on its laurels for so long, and the laurels are rotting.

What’s here? Tea? The world of Tea is highly corrupt. Corruption is part of decay, and in a sense decay is a part of Japanese art, so perhaps traditional arts need an atmosphere of corruption. Maybe they thrive on acid, the acid that corrupts; just as “culture” itself can also mean a sealed environment in which selected biological material grows.

Kyoto culture is dead, and only having pronounced it as dead is it possible to start again. The corpse must be buried. It is being left behind in Kansai. Kobe is a thriving, fantastic community. Osaka is just beginning to regain itself. The Linear isn’t even going to come — the closest stop will be Nara. We’ll benefit from being close to those centres, but it will be to use the Japanese expression, the hiyameshi kui. It will get the cold rice after the older brothers have eaten.

In last month’s Asahi Shimbun Kyoto City sponsored this inane campaign, enlisting five people from around the world to write about Kyoto, including — if you can believe this — Henry Kissinger. That reminded me instantly of a plaque I saw outside Novgorod in 1964, outside this church. It said: “Novgorod is one of the ancient capitals of Russia and it certainly is a beautiful city. Karl Marx.” Of all the people who despised Russia, and who would have had no reason to say anything of the kind! That’s what I thought when a man like Kissinger, to have him say that Kyoto is a beautiful city…

Kyoto doesn’t have a clue how to create contemporary culture. The great culture of Kyoto, when it was contemporary, was created by outcasts and revolutionaries, not functionaires, and not by them having had a lot of money. I’m optimistic about Kyoto in the long run, but it’s going to take a lot of soul-searching.