From the series: "Kyoto's Women Entrepreneurs"

Chiemi Ogura weaves statement tableware and has branched out into incredibly intricate jewellery. 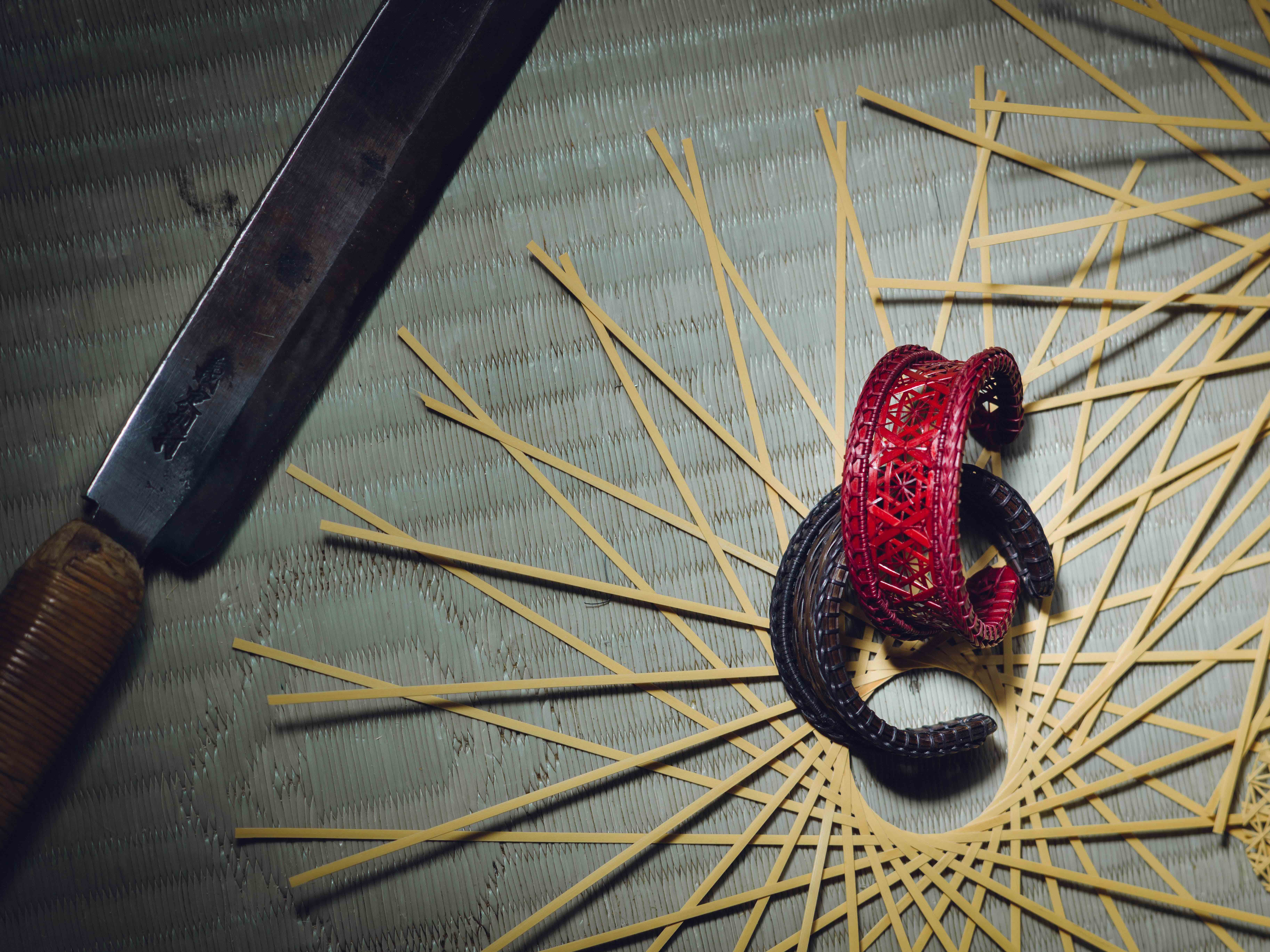 Growing up in Kanagawa, Chiemi Oguri’s formative memories are of watching her parents precisely piece together tiny components. The origin of their craft, however, was epochs ahead of that which she would pursue: bamboo weaving. “They were involved in making things by hand, but it was much more modern and mechanical. They used to assemble electronics for work and were always tinkering,” recalled Chiemi, who took keenly to creating origami and other paper crafts alongside her parents.

At school Chiemi learned about traditional Japanese arts and environmentalism, which influenced her to take up bamboo weaving. Moving to Kyoto, she honed her skills at Kyoto City University of Arts for two years. “My Master was male, and I think during his time there were more men involved in bamboo craft, but since then I have seen more and more women taking it up, even if it’s considered a little labour-intensive,” noted Chiemi.

Upon graduating in 2004, Chiemi began working on group exhibitions and as a freelance weaver for stores. 2009 saw the launch of Chiemi’s brand, Kyotakekago Hanakokoro and by 2013 she was producing increasingly contemporary designs. “I had focused on traditional forms and styles, but by the time I was starting to exhibit I realised that such pieces were not getting much attention; that’s when I started experimenting with accessories –  cuffs, bangles, rings and pendants, for women and men. They were so well received,” said Chiemi, attributing this to their smaller size, affordability, and fashion trends.

Today her range incorporates woven patterns in the traditional Kyoto style. “Even for the modern creations, I incorporate heritage patterns, which are drawn from nature. There is the ‘botan’ (peony), ‘matsu no hari’ (pine needle), ‘jabara’  (snake underbelly) and bay leaf patterns, as well as the ‘chō-musubi’ (butterfly knot),” says Chiemi. “I find the traditional techniques very beautiful, and I like to think about how I can utilise them to make beautiful new pieces that are functional in some way.”

Chiemi works from her inner-west Kyoto home studio. Everything step is done by her and by hand, from cutting strips from raw, Kyoto-sourced stalks, to the final dying that washes jewellery in unique wine, turquoise, and emerald shades. It typically takes from three to seven days to complete a basket or vase, while a detailed cuff takes five. Devising new pieces is a more time-consuming involving trial and error. “The traditional items have a known structure and the process to bring those together is relatively straight-forward,” she explained. “For my more contemporary designs, I am creating the irregular form, so thinking about how to turn flat woven panels into a three-dimensional form with seamless joins, or how to weave the shape strip by strip is much more difficult.”

She believes it’s important to cherish bamboo products and take an interest in the craft because it utilises an environmentally friendly, locally abundant resource, and the products, unlike cheap, mass-produced alternatives, are well made to be surprisingly long-lasting. But perhaps most importantly because of the historical philosophy of practice. “Traditional Japanese like basketry, tea ceremony and ‘ikebana’ floristry are about conveying beauty, but the main idea is to treasure the heart and effort that goes into the process,” she said. “I want to contribute to this idea and see it continue.”

Weaving is how Chiemi makes a living, so she must prioritise creating pieces that will sell. She holds exhibitions and department store displays in Kyoto, Osaka and Tokyo, and also gains business through word-of-mouth referrals. “I’m really thankful to the people who ha supported me, and afforded me the time to focus on more experimental work. I’ll be striving to create new products, exhibitions and workshops this year…and improve my skills, of course!” says Chiemi, an ever modest, and incredibly industrious maker.