In Praise of Clay: Robert Yellin muses on the ties that bind art, life and environment

[A]t the end of a tranquil lane near Kyoto’s famed Silver Pavilion (Ginkakuji) and just off the Philosopher’s Path, stands an attractive yet unassuming two-storey house with a colorful past. Formerly the home of prominent Canadian tea master John McGee, whose star-studded guest list included pop icons like David Bowie and Iman, it has morphed into the Robert Yellin Yakimono Gallery, offering one of Kyoto’s most diverse collections of Japanese ceramics.

On ascending the steps that lead from the street to the gallery, visitors stroll a stone path past a well-kept rock garden to enter the private residence-cum-gallery. During his first visit to the house Yellin fell summarily under its spell. 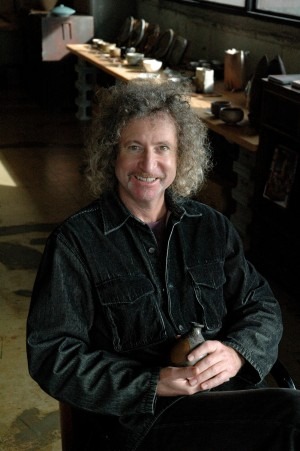 “It was serendipity,” he said. “After a realtor drove me around and showed me many places in bad condition, he called back a few days later and said, ‘Robert, I’ve found an amazing house that does not come on the market.’” And so, after a decade in the town of Mishima, 100 km west of Tokyo in Shizuoka Prefecture, Yellin uprooted and moved to Kyoto, in the heart of a region renowned for its varied palate tsujiaji (“clay flavors”). “After my Mishima period, I wanted to be closer to all of the kilns I love. So it made sense to move to the Kyoto area.”

[T]he ceramic arts — yakimono in Japanese (literally “fired thing”), a word that can describe anything from a fired pot to a grilled fish – have a long, extraordinarily rich history in Japan, dating back to the prehistoric Jomon period, making them among the world’s oldest, Japan’s ceramic arts have become world-renowned since the 1950s, when prominent Japanese potters, such as Hamada Shoji, who was declared a Living National Treasure, introduced styles, ideas and techniques to the West, from California to the UK. “These guys were intense artists,” Yellin said. “But they got labeled folk craft artists. In reality, these are very sophisticated artists. You not only have to be a potter. You have to be a chemist, a carpenter and an engineer.”

Such was the demand for high grade ceramics during the “bubble years” that potters like Kakurezaki Ryuichi attracted mobs of fans who even camped outside galleries to be the first in line to buy his art. Today, however, sales are no longer booming for potters at the upper level, while their lesser-known though skilled counterparts are losing ground amid the onslaught of 100-yen shops and an economy in decline.

Yet, more is at stake than the Japan’s kilns. According to Yellin, traditional arts and crafts are linked to larger, more troubling trends as well, from an overdependence on mass-produced goods to the growing sense of disconnection brought on by our frantic lives. “Environmental problems start in the kitchen,” he said. “If people use vessels they care about, they may have to pay a bit more. But that means they’ll be more conscious about how they use them. When you’re more conscious about things, then you’re in touch with something broader than yourself.” 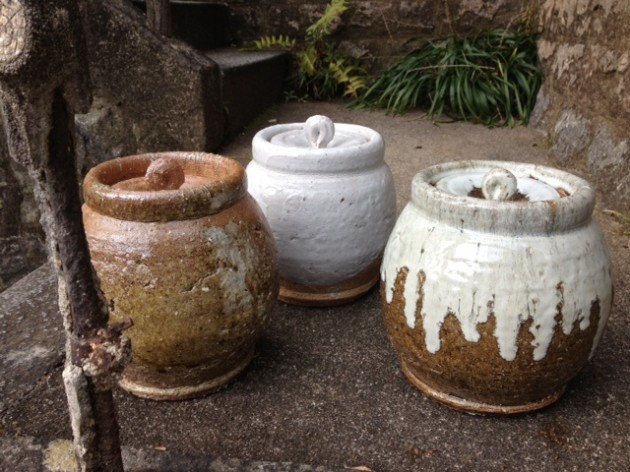 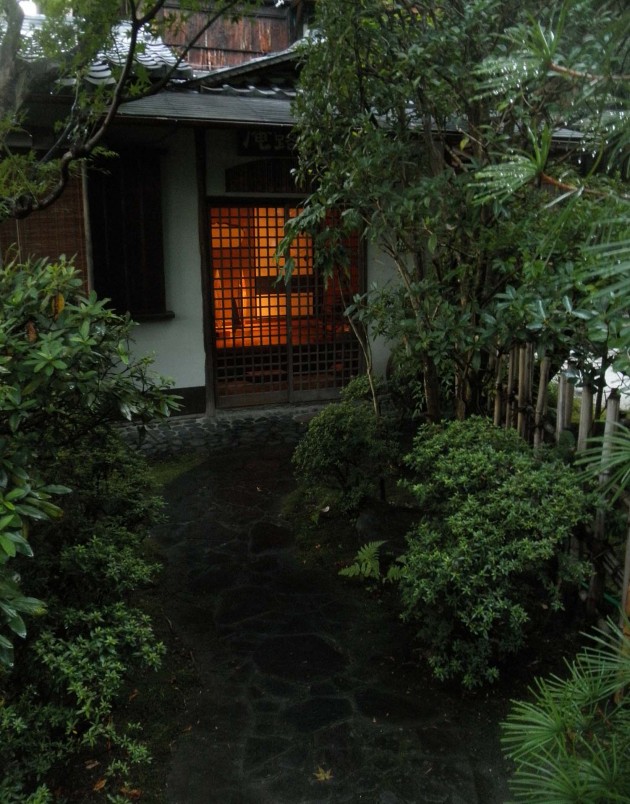 [Y]ellin’s musings on the ties between art, life and the environment are ripe with suggestions on how we can all make incremental changes in our world. This down-to-earth approach is appropriate. “I love to eat and drink,” Yellin said, pouring cool water into a hand-made ceramic cup. “After being introduced to the beauty of Japanese tableware and vessels, I couldn’t go back to the States and use a matching set of Wedgwood. It became the ultimate boredom.”

Since discovering the “perfect imperfection” of Japanese ceramics, two decades ago, Yellin has undergone several metamorphoses, culminating in his newly-opened Kyoto gallery. In the early 1990s, while teaching conversational English at Aoyama Gakuin University in Tokyo, Yellin devoured books, visited kilns and museums, and most importantly, began to live with the pieces of his slowly growing collection. After stocking up on knowledge and cultivating his eye, he decided it was time to share his findings. With an introduction from sake expert and friend John Gauntner, Yellin successfully pitched a ceramics column to the Japan Times.

“I wanted to let people to know about this brilliant art in Tokyo where this information was not available in English.,” said Yellin, whose Ceramic Scene column ran from 1996 to 2006. “Then the Net took off and people began contacting me through it to ask about getting hold of exhibition catalogs. Soon enough, people began asking me to actually help them get pieces. So it was a natural progression from there.”

When Yellin launched the world’s first online yakimono shop in 1998, he began to draw wider attention. “It was pioneering at the time; buying a three-dimensional object from a two-dimensional screen,” he said. “There are old fashioned collectors who want to kick the tires, and I understand that. But there are also people all over the world who I have built a relationship with and who trust me. In ten to twelve years I’ve assisted people to create amazing collections without ever coming to Japan.”

While there are sophisticated criteria for evaluating a piece of pottery – basically firing, clay and form – Yellin advises beginners to follow their gut. “Don’t pound a piece with questions,” he said. “Trust your senses and see what kind of dialogue you can have with it.” While an antique Raku Kichizaemon tea bowl goes for $80,000, in Yellin’s view spending more money does not mean better art. Sometimes it’s even the reverse. “You can buy really good ceramic art in Japan for under $100.” 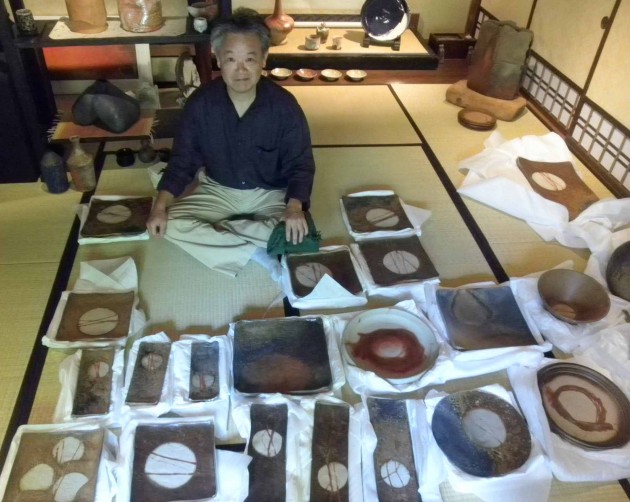 [T]he works Yellin has assembled in his “mini-museum” form a compendium of philosophies and styles, from utilitarian teapots and cups to stunning avant-garde sculptures by visionaries like Akiyama Yo. “When you look around this gallery you’ll see works of perfect porcelain which were meant to be perfectly calculated and maximally controlled,” Yellin said. “But then you’ll also see rough-hewn stoneware, which to me is the backbone of one of the great aesthetics of Japan: the six old kilns of Japan.”

These six kilns are located in Bizen, Shigaraki, Tanba, Seto, Echizen and Tokoname, each with its own distinctive clay and local touches. Generations of craftsmen with unwavering dedication laid the aesthetic foundation that has emerged from these kilns has been painstakingly laid over centuries by generations of craftsmen who have practiced their art with unwavering dedication. “One of Japan’s greatest assets is the shokunin, spirit, the spirit of the craftsman,” Yellin said. “There are geniuses, but they are few and far between. Times change and our lifestyles have changed. Tradition has to keep up with these changes.”

Kyoto itself is an example of balancing tradition with healthy doses of novelty. On one hand, the city has a long line of potters associated with tea ceremony, such as Raku Kichizaemon, the 15th generation master of the Raku family whose lineage stretches back to an association with Sen no Rikyu (1522-91), one of the creators of tea ceremony. On the other hand, some of Japan’s most radical clay artists have also hailed from Kyoto.

One noteworthy example of a group of Kyoto potters who broke with the norm was Sodeisha (literally “crawling through the mud” — a name derived from a kind of glaze). Founded after World War II by Yagi Kazuo, Suzuki Osamu and Yamada Hikaru, whose sons are also working ceramicists today, Sodeisha broke radically with the mingei folk arts movement popularized by Yanagi Soetsu, Hamada Shoji and Kawai Kanjiro in the 1920s and ’30s.

In essence, Sodeisha avoided making anything functional. “If something had a hole in it, an opening, they had no use for it,” Yellin explained. “These guys basically flipped the conception of ceramic art in Japan and took it to a totally different level. They were crawling through the mud. Japan was in ruins. They were looking for new direction as young artists.”

[I]n any traditional art, there are those who fear change and those who push for change for the sake of change. Yellin believes that both these extremes should be avoided. “There needs to be more change, but at a balanced pace,” he said. “Change for effect or out of protest without having a good understanding of what came before is just like a flash in the pan or a fireworks display. It disappears.”

Whether conservative or cutting edge, traditional artists – not only potters, but weavers, glass artists, kimono makers – are struggling today. “The great traditions are having a hard time,” Yellin said. “If we don’t support the arts today, they will just fade away. You can go to a 100-yen shop and buy something functionally equivalent, but you’re actually hurting your own culture.”

Like an ecosystem, when one link is broken, the whole suffers. The decline of Japan’s traditional arts can be seen as a gauge of the overall socioeconomic system as well as the cultural tapestry in which these arts are found. On the flip side, revitalizing these great traditions may help to bring the rest of the system into a healthier state. Among the biggest problems, Yellin points to our dependence on mass-produced goods – an addiction with grave environmental consequences. Another troubling result of our reliance on cheap synthetic products is seen in the effect it has on local economies, where artisans are not supported as they once were.

Yellin proposed that local and prefectural governments set up learning centers staffed by passionate, knowledgeable mentors in the traditional arts to pass along their craft to young people. Further, he suggested that local economies may regain some vigor by finding ways to market their crafts through the Internet, trade shows and markets. “Regionality in Japan is something so special,” he said. “When you go somewhere you get an omiyage (souvenir food or product) that you can only get there. So I think propping up regional goods is one way to set up a strong cultural net for Japan.”

Ultimately, Yellin connected this all back to the quality of our lives as we live them day to day. “Our days are so busy and frazzled,” he said. “At the end of a day I like to come home and use something made by hand. It roots me in the present and brings me to a good place. Visual pieces are like visual haiku. Instead of coming home and turning on the TV, I pick up a good book and look up to see a beautiful piece of art. It’s inspirational.”

As the world speeds by, the traditions that gave birth to these inspired works of clay hang in the balance. Not only connoisseurs like Yellin, but all of us, hold the key to keeping these revered traditions alive for future generations.