In the Realm of the Bicycle

November 20, 2016 / TOKONOMA
[I] first noticed them, the fact of their everywhereness, during my daily commute to and from work, as they stood and leaned and laid and zipped around in all the conditions of life itself: some, sleek and smart in sparkling newness; others, the great majority, showing signs of daily wear and tear as they whizzed here and there, bearing their masters and multiple burdens to school shop home office, or stood dutifully in rows waiting, whatever the weather, to take up their tasks once more; and then at the other extreme were the abandoned ones, waiting faithfully for masters who would never return; they had been left to the elements, which slowly ate away at their metallic flesh, all unheeded by the hardened passerby.

Each encounter I had with a member of this vast race revealed an individual with a personality all its own, the result of a history at once common and mysterious. Inevitably, I came to see them as they really were: creatures who populated the niches and nooks and corners and alleys of neighborhoods and streets and lives. Some I met in rivers, some on rooftops, still others tangled in heaps with each other. 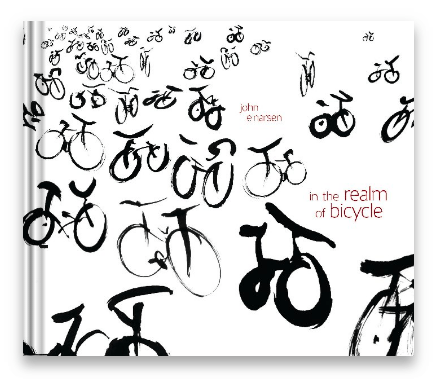 In time, I began to feel that I was beholding the innocent and fading victims of a vast war waged daily — relics of the ebbing and surging of great forces, the cosmic to and fro, the endless advance and retreat that keeps the heart of a city beating: sometimes frantically, sometimes with a welcome slowness. Some of those I saw had experienced such carnage that only a few rusty body parts remained. Those who were relatively intact but no longer of any use, the forlorn and forgotten, mutely represented a disturbingly casual expendability: specters from the dark and leprous corner of a consumerism gone mad.

And so I began with my camera to record their story, as my movements around town took me through their world. These photographs show them exactly as I found them; as indeed they remain even now, in their places everywhere, waiting only to serve.

The book can be purchased here