[K]awamura Junko, wife of the late Nobushige Kawamura, a prominent lead performer shite of the Kanze school of Noh and recipient of the title “Holder of Important Intangible Cultural Property” is actively engaged in promoting knowledge about and the practice of Noh. She gives workshops and lectures to some 20,000 people each year. 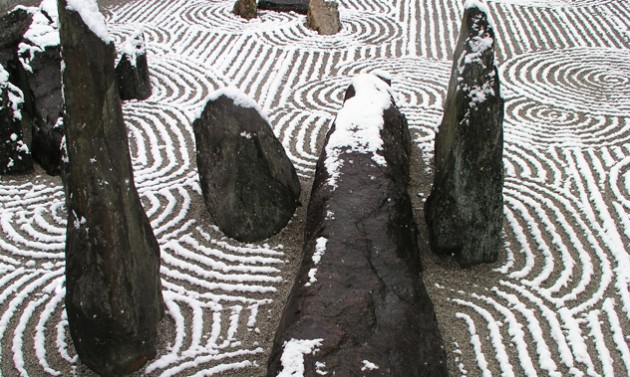 How did Kyoto influence Noh theater?

It’s said that Kan’ami was originally from the Yamato area, roughly today’s Nara. While his son Zeami was still a boy, Kan’mi met shogun Ashikaga Yoshimitsu; this meeting in 1374 led to Zeami growing up in the “Kitayama culture” which flourished in Kyoto at the time, as typified by the Muromachi Palace, also known as Hana no Gosho, or the “Flower Palace.” There, amidst the variety of art forms which were then developing in Kyoto, Kan’ami and Zeami established Noh as we know it today.

What are some misconceptions people have of Noh?

Many people think that Noh consists only of very slow, quiet motion, but there are also scenes with very quick, dynamic motion, and even during slow passages, you can see moments of fast, active movement. Noh is based on kata, simple stylized forms, stylistic beauty, you might say that convey a lot precisely because they are so simple.

What is the essence of Noh?

The fascination of Noh is that it displays what cannot be seen. The pose, or kamae, is fundamental to Noh. The character stands still, seemingly frozen, but instead of a lack of motion, the kamae displays dynamic stillness. The actor is not moving, but the pose is full of pent-up energy. Think of a spinning top: When it spins the fastest, it may appear to be standing still. In the same way, the kamae is full of energy.

The concept of jo-ha-kyu, originally from ancient China, is fundamental to Noh’s rhythm — a slow start, development and disruption, and then resolution. Johakyu appears in other art forms, but it is best known today as part of Noh. It is also found in musical compositions or within sections of a composition, and also appears in the choice of plays for a day’s program, in social trends, and in a person’s life.

Zeami said that if there are ten forms of expression, the body can convey only seven, but the movements of the heart should try to convey all ten. This permits great variety of expression, and the energy of Noh has kept it alive for 600 years.

The Noh stage is special as well. It can be viewed both from the front and from the side. Within the pillars at its four corners is a space unlike the space of our everyday lives; it’s a world of its own, where the lead in a play is often a spirit or a ghost. 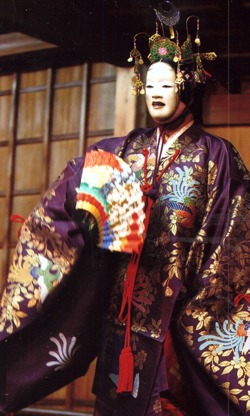 In the play Yashima, Yoshitsune appears as a spirit with much to say, which he wants to convey to us, too, as we watch today in the modern world. On stage he recreates his battles for us before returning to the spirit world. Yoshitsune does a kakeri, a warrior’s dance to show suffering. In a kakeri, the warrior becomes arrogant and his spirit soars, and he breaks into motion without really intending to do so. But the battle turns into an unending bloodbath and unending suffering. Predictably there are shifts in rhythm, starting normally and building in tempo as the energy grows, then ebbs, and grows again. At last he realizes that what he had thought was the cry of war was really a seagull. With the dawn, he seems only a dream or an illusion that vanishes in the breeze.

Even after the shite, the lead actor, has left the stage, the energy seems to remain. A lingering suggestion of energy touches the hearts of the viewers, appealing to them from the now-empty stage.

How is Noh related to calligraphy?

Thinking about Noh and calligraphy, I realized that the calligrapher faces a large, white paper and writes, somehow trying to express something about himself. It’s an expression of his own energy, his existence or personality. In Noh, too, the energy produced by the inner rhythms of the human body seeks to express itself through the kata. I think that energy and rhythm express themselves both in calligraphy and in Noh.

What is the most interesting thing about Kyoto?

Kyoto is abundantly blessed in both its natural environment and its culture; the Kamo River flows through the city, in a region of purple mountains and bright waters, and the people have developed a different sensibility toward their surroundings. Because culture is rooted in a region’s natural features, the culture that grew here naturally became our own cultural cradle and guided our growth. Where the courtiers of an ancient age once walked, we still walk today, and it’s as if we were all tied together over the ages by this location. When people come to Kyoto, they don’t come just to see the shrines and temples — they come seeking to experience the culture that underlies Kyoto. I feel very fortunate that I can play a role in introducing this tradition.