Last month marked the 10th edition of Kyoto Experiment (KEX), an annual International Performing Arts Festival that presented avant-garde works by eleven feature artists who represented six regions of the world, running from Oct. 5-27. This year’s theme, Échos-monde: The Age of Ecology, explored the subtleties and complexities of our subjective relationship with nature to “awaken a composed sense of the world we live in.” While broad in scope, the synergistic connection between self and place was acutely expressed through a number of thoughtful performances as well the atmosphere that surrounded the festival.

The 10th year of the festival holds particular importance within the performing arts community during a time when the space for artistic expression in Japan feels increasingly constricted: in the time since this KEX ended, the space to reflect on its significance in not only the city of Kyoto but the rest of Japan has become all the more apparent. In his speech during the Opening Party for KEX, the festival’s Director Yusuke Hashimoto emphasized the tension enveloping artistic communities in Japan in light of the Censorship controversy around the recent Aichi Triennale. 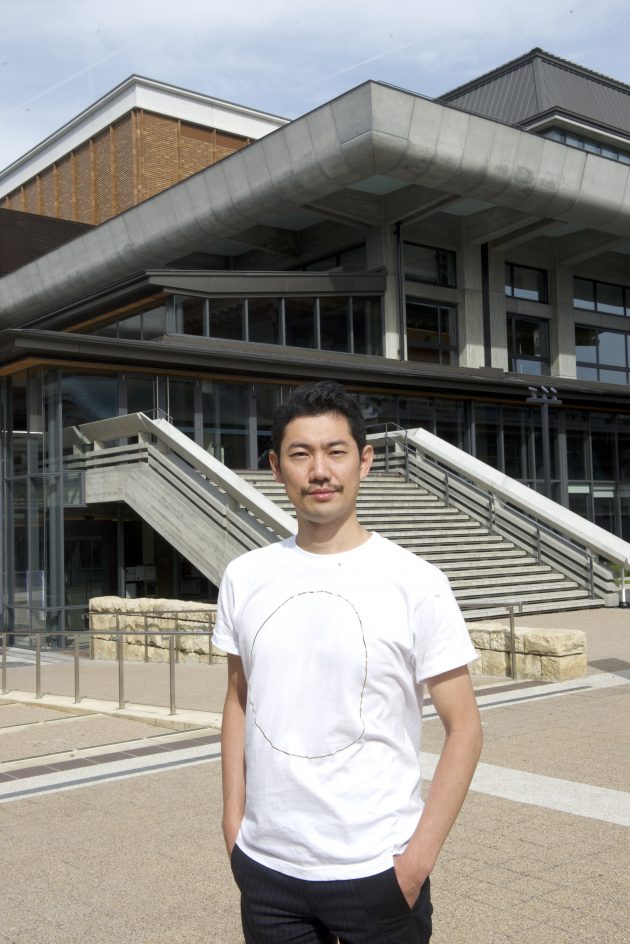 This year’s Triennale, held in Nagoya, closed a section titled “”After ‘Freedom of Expression?’” after certain works ignited outrage, in particular a statue depicting a South Korean “comfort woman” by Kim Seo-kyung and Kim Eun-sung, as well another as a video installation by Nobuyuki Oura that included a portrait of Emperor Showa whose face appears to be burnt away. The latter work had previously been featured as a part of an exhibition called “Holding Perspective” at the Museum of Modern Art in Toyama. This exhibit featured a series of prints of the Emperor that Oura created in 1986 and also faced intense criticism from politicians and right-wing activists despite Oura expressing that the images were not meant to critique Emperor Showa. Ultimately the museum sold the works it had purchased from Oura and burnt the remaining copies of the exhibition catalogue. Inclusion of the image of Emperor Showa from this series in the Aichi Triennale exhibit can therefore be seen as a critique of the people who burnt the previous catalogue; the result is that this particular work by Oura has been censored twice.

Heated debate over freedom of expression has flared in the wake of this decision made in early August, with a petition protesting its closure collecting over 29,000 signatures. Ultimately, the section was re-opened toward the end of the festival in late September. However, the backlash led the Agency of Cultural Affairs to withdraw its ¥78 million state subsidy for the Triennale on the basis of “procedural inadequacies”, casting renewed malaise over support for the arts in Japan. Another petition protesting the retraction of funding received over 60,000 signatures in its first 24 hours of launching.

The Triennale is the most visible example of a mounting struggle in the freedom of expression in addition to funding access for artists in Japan.

“The basic code for arts and culture in Japan stipulates that in order to promote culture and the arts in our country it is essential to deeply recognize the importance of freedom of expression, which is the foundation of the culture and the arts, and to respect the autonomy of persons engaged in cultural and artistic activities,” Hashimoto said in his opening speech on Oct. 5.“ And just like any other art festivals and events held at cultural facilities throughout the country, KEX is a stronghold that protects the freedom of expression which is essential for civil society, and I hope to work with all of you here to enjoy this moment to the fullest while we resiliently protect our space.”

This is part of what positions KEX as such a meaningful event. While other spaces for the arts are narrowing across the country, the festival has helped create an environment where multidisciplinary arts have a platform to grow, and where local and international communities can engage with boundary-pushing performances of creative expression. 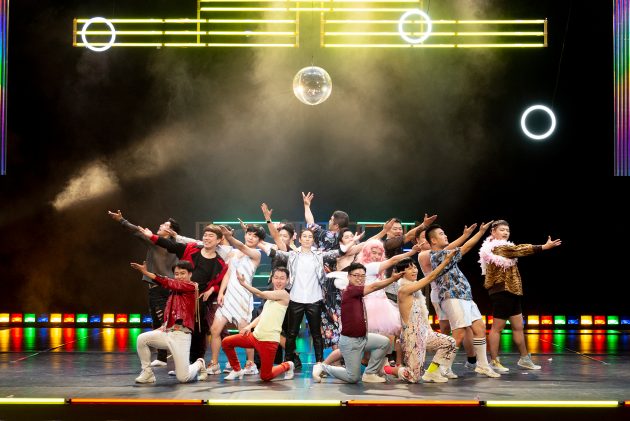 Hashimoto believes Kyoto provides a particularly fruitful space for the arts to flourish, in part because it’s a smaller city with a significant population of younger people (there are 38 universities and colleges in Kyoto). He says that this allows for an atmosphere where controversial pieces can be discussed and understood more deeply; there is a face-to-face element that exists here that has helped build a mutual trust between the artists and audience over the past ten years. The audience recognizes the importance of this space as a part of the cultural fabric of the city, encouraging them to actively keep it alive, Hashimoto says, a sentiment that is directly linked to the festival’s theme concerning our relationships to the surrounding environment. 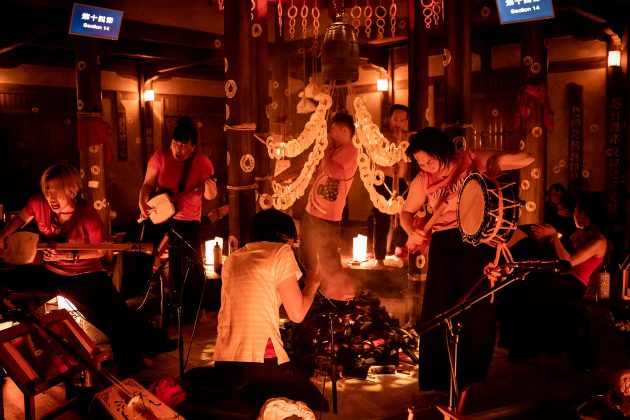 In the play Octopus Monks: Ritual of Forgetting, for example, the audience is a part of the stage where the ritualistic performance takes place. The audience becomes fully immersed in the sensory journey that unfolds, becoming active participants as conventional divisions slough away. Similarly, Corbeaux (“Crows”) took place in both Nijo Castle and Heian Shrine, inviting the audience to reimagine these famous settings as fluid stages void of traditional boundaries between audience and performer.

“The audience cannot avoid seeing and recognizing the atmosphere of that place,” says Hashimoto, in reference to Nijo-jo and Heian Shrine. “There is always a relationship between the performance and environment.” 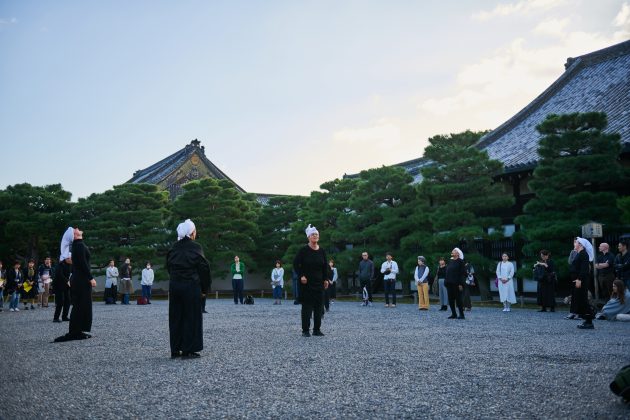 Hashimoto also points out that William Kentridge, the well-known South African artist, walked freely amongst the crowd following his show Winterreise, subverting the untouchable status of stardom by engaging face-to-face with his fans.

A particularly visceral example that implored the audience to be present with their subjective experience of the setting was felt in Practice of Spiral, a voiceless installation by Tsuyoshi Hisakado that placed the audience on the stage itself, with the curtain rising to reveal a darkened auditorium which served as a setting for poetic oscillations of light, shadow, sculpture and sound. The subtle layers of sight and sound reverberated in uniquely distinct ways within each audience member to create a connection between them and the artist. 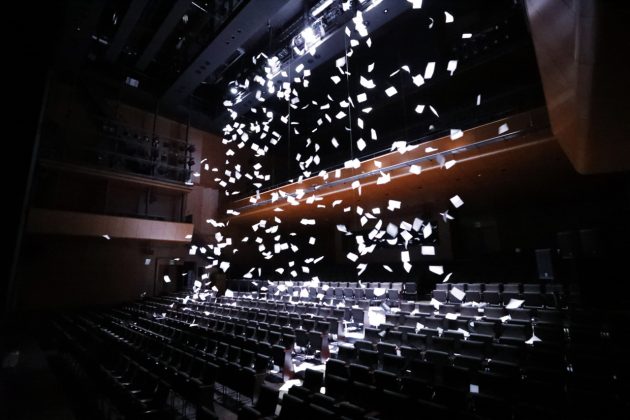 This particular theme resulted in part from Hashimoto’s recent interest in architecture and cities. ROHM Theater Kyoto, for example, became one of the main venues for KEX in 2016 after Hashimoto proposed the festival and city of Kyoto collaborate on its renovation.

“I recognized the theater – the venue – is not a temporary event,” says Hashimoto. “The theater is permanent and a root to the city, always facing the daily life of the people.”

Over the course of his ten years as Director of KEX, Hashimoto’s interest has shifted to more closely consider this relationship between the city and its people. Alongside the renovation of ROHM Theater Kyoto (Kyoto’s former concert hall), an architecture team created a separate public installation around the theater wherein recognizable objects – a baseball scoreboard, a bridge, for example – were reorganized so that their parts served a different purpose; the scoreboard became a bar, the bridge became a bench. “I noticed the significance of architecture and design as the bridge between art and our lives through the renovation process,” says Hashimoto. The intention was to communicate such a connection between KEX’s stakeholders and those living in the area, aiming to shift people’s perspectives as they engaged with these objects in their new form and in the particular space.

“Through this theme we would like to state that the world consists of numerous layers of someone’s environment,” explains Hashimoto. 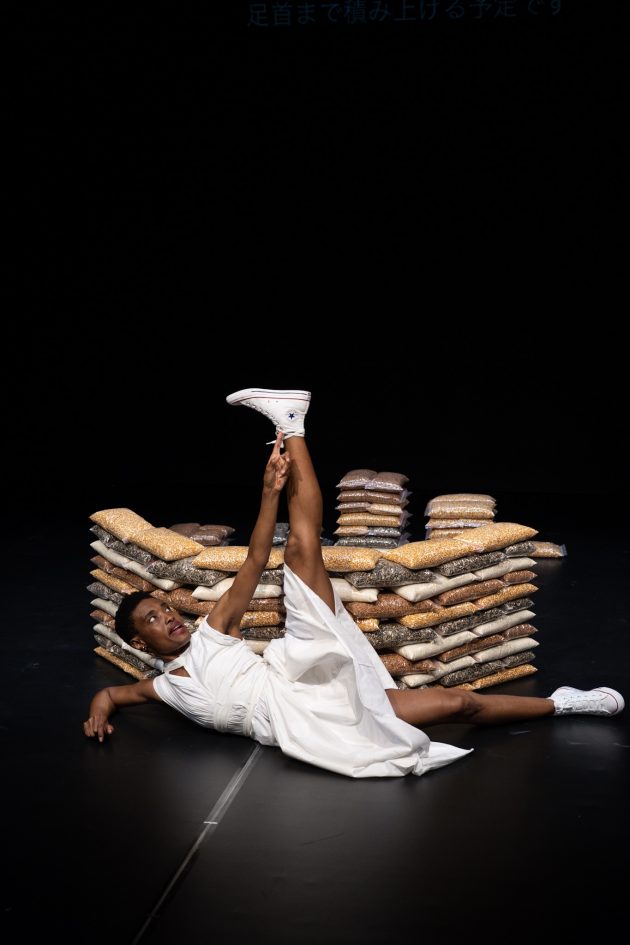 This year also marks a turning point for the festival as Hashimoto steps down, leaving the ongoing development of KEX to three younger co-directors, which he hopes will result in renewed vision and a more collaborative decision-making process. Now, Hashimoto is preparing for a sabbatical during which he will pursue research on funding and networking opportunities that will help create more space for future artists in Japan. He explains that his arc as Director has helped him see the festival as a community rather than an event, a collaboration between the people and the city of Kyoto.

“This festival is not mine,” he says, reflecting on his opportunity to found KEX over ten years ago. “I hope the next Directors will think of this festival as not just an event. I hope they will think of it as a kind of node in [Kyoto’s] history of the contribution [to] performing arts.”

Hashimoto’s own contributions have cultivated the rich relationship between the performing arts and the city of Kyoto that now exists, his legacy well-established throughout venues, exhibitions, and people who will remain touched by the arts community for many festivals to come.