Senrei Nishikawa was a teacher of classical Japanese dance (nihonbuyo) in the Nishikawa School. Born and raised in Kyoto, she trained in kabuki-style buyo under headmaster Nishikawa Kôza-burô in Nagoya. She began producing “An Evening with Senrei” in 1981, producing and directing new works for buyo including those based on folktales, literature, and biography. Drawing on classical dance forms, Senrei went beyond the confines of the traditional repertoire, seeking collaborations with noh and modern theatre actors, contemporary dancers and musicians. Her works were also known for their imaginative sets and costumes. Senrei received Kyoto City’s first “new artist” award in 1991, and continued to give regular lessons to Japanese girls and women, while offering weekly special lessons to foreign students at area universities. From 2002 until her passing in 2012, she taught countless artists and teachers during the summer intensive of Traditional Theatre Training, and toured in the US, Poland, Italy, Switzerland, Germany, and France. 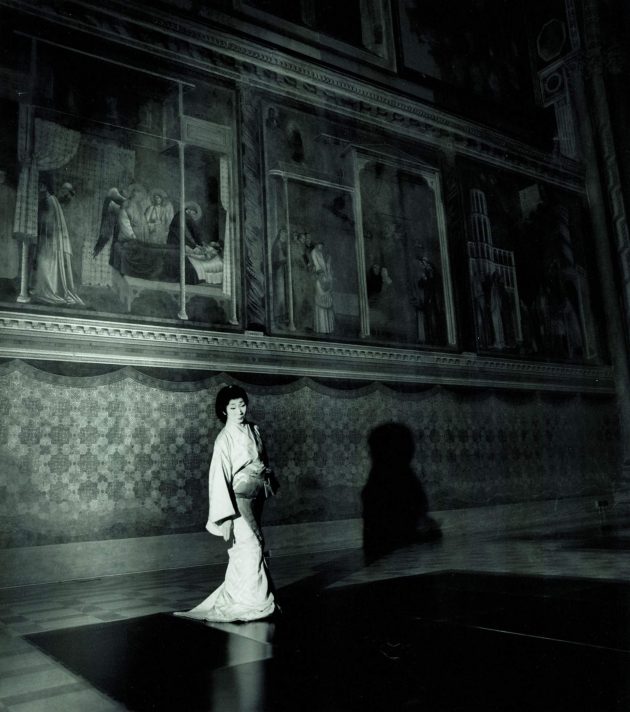 “MY NEW PIECES WERE INSPIRED BY SUBTERRANEAN STREAMS of influence between East and West, Japan and Europe. So, Camille Claudel was inspired by prints of Hokusai, and her sculptures in turn inspired my danced portrait of her. Kawai Hayao studied under Jung, absorbing European perspectives in examining Japanese myths. Then Jung in his late days turned his eyes to Eastern mysticism. My memorial concert for Kawai features a recording of a live collaboration between Tendai sect Buddhist shomyo chant and Gregorian chant at a church in Prague — they seem perfectly natural together! You don’t have to strain to find these convergences.

“For my new works, foreigners are a better audience than Japanese, as they need not rely on an outline to appreciate a dance. Japanese always seem to need to read programs and figure things out intellectually instead of experiencing the performance directly. Yet there are things that cannot be explained in words, the aura of old times which just doesn’t exist in our world today. So, even if the external forms are taught, that inner spirit is difficult to understand. For Japanese and foreigners as well, life has kept changing, making the art forms seem precious and distant, to be grasped by the intellect if at all. If I want to ask a spectator’s opinion about my dance, I have to grab them immediately afterward and probe them specifically, otherwise they’ll be too diplomatic after they’ve had a chance to process it.

“As for teaching, I never have a sense that Japanese disciples have a special receptivity that foreigners don’t. In fact, when it comes to learning, foreigners seem to have the ability to grasp techniques even faster. They don’t have to overcome accustomed habits or preconceptions, but proceed directly to imitation of the correct forms. Whether one comes from a theatre or dance background, or has no training at all, nihonbuyo can be mastered. The worst students are those amateurs who use logic to try to comprehend the forms with questions.

“Of course when I train foreign or Japanese students in short-term intensives, I have to teach them everything in three months or less. So I need to train them in external aspects of beauty: that’s the bare bones of the art. To do that, I tell them what to do, and ask them to follow my instructions, but never explain why. I’ve been studying buyo that way since the age of four. For example, we’re told to walk across a single tatami mat in exactly seven steps. The point is not for you to count those seven steps, but to force you to move with awareness. If you try to walk exactly seven steps, you’ll keep your knees together in the proper way. And while you won’t have been told this, the reason you have to keep you knees together is so that the slit at the bottom of the kimono won’t open and expose your legs. That’s why those who practice buyo can wear their kimono beautifully. Without saying so explicitly, buyo takes the elegance of everyday life and makes it naturally into a stage art.

“I don’t consider my traditional repertoire to be fundamentally different from my creative works; they feed each other. In both, you have to enter the feeling through stylized forms, but then you have to leave the forms through original emotional expression. Naturally there is a difference between repeating inherited fixed forms or creating those forms yourself. But the result is the same; if one isn’t able to break from the set forms, it’s not interesting. 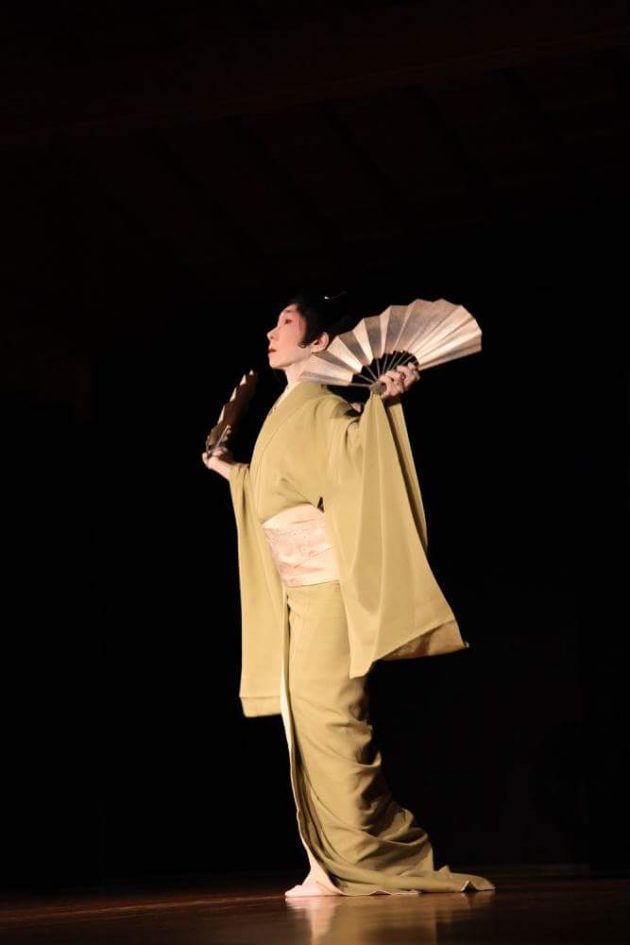 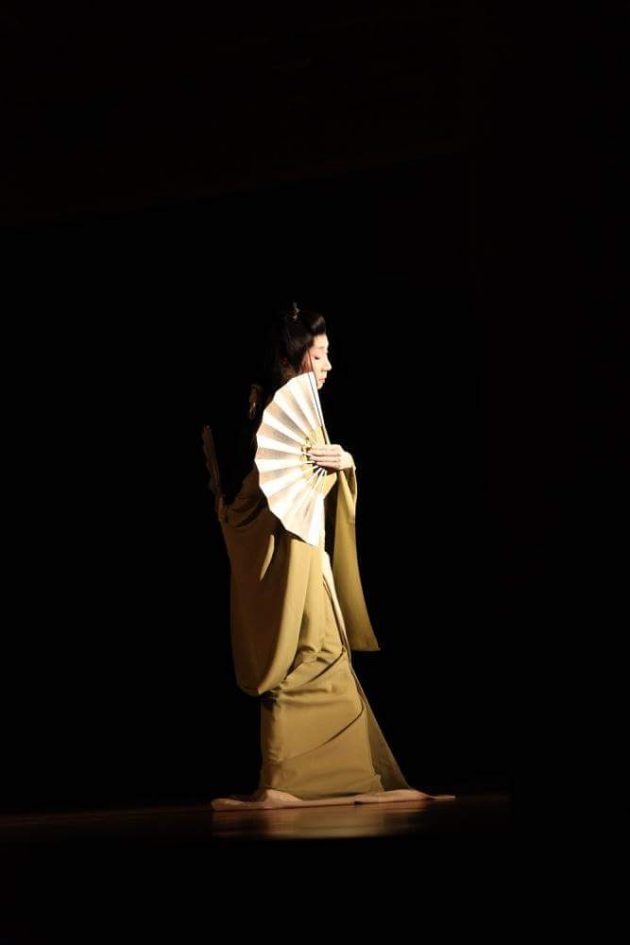 “SOME SAY THAT EXPERIMENTING AT TOO EARLY AN AGE MAY INTERFERE with the pure expression of the traditional art, but I have not found it so. When you start doing something new, you begin to understand the reasons behind all the forms you were taught by rote. For example a young girls’ movement is expressed by sliding each foot forward in turn while the shoulder rolls back and the neck bends from side to side. This was taught mechanically, without a word of explanation. Only when I was creating a new piece did I realize that it was expressing perfectly the demure shilly-shally of a young girl’s confused heart. That’s something that a really clever person came up with few centuries ago and fixed at some point. Whoever sees the movement performed will be able to grasp immediately what it means, a universal effect. But there was someone who first thought it up. So realizing that while creating something new is a way of reconnecting with that original inspiration that led to all the forms.

“The country house in Keihoku-cho where I create new works is surrounded by a beautiful atmosphere of mountains and nature. There I feel an aspect of Kyoto that is being lost: the palpable sense of historical geography. The feel of the physical earth is important: who walked here when, absorbing those lives through your feet, whether at Yasaka Shrine or Nijo Castle. So many things were born in Kyoto. Covered with concrete, the land can’t breathe, so history can no longer be truly felt.

“When I travelled to Europe, I noticed that following World War II, the bombed-out Polish cities had been restored to their original state, exactly as before. Yet this isn’t done here in Kyoto. There’s nowhere that’s preserved exactly the same. The word for the proper feeling towards this is “devotion” (tessuru), I think. It’s true about any endeavor: you can’t hesitate but must devote yourself passionately to something. Whether you conserve or destroy, you should stick to that. Both sides should respect the other. Conservationists can’t say “developers are no good” or developers decry conservationists. They have to respect each other, and out of the give and take of their endeavors, forge something new together. Through the parry and thrust of their passion, Kyoto could become a good city.

“YOU HAVE TO TEAR DOWN THE OLD COMPLETELY SOMETIMES to build the new in the spirit of the old. When I revive a piece, everything changes. Even if the performers are all the same, we’ve grown, so through repetition the piece will change. And when a drummer is replaced, the others adjust, or a new dancer brings something to the piece that the previous one didn’t possess. It’s interesting how even with everything changing, somehow everything comes together in the end! By throwing out all that was created before, you can recreate the tension of its original creation in live performance for fresh audiences. Looking at videos of previous performances, to prepare promotion for overseas tours is really dull, like meeting an old lover.”

Jonah directs the Noho Theatre Group and Traditional Theater Training program in Kyoto. He teaches comparative theatre at Ryukoku University and has contributed to Kyoto Journal since its founding