Ima Tenko is an acclaimed veteran of the ‘butoh’ dance movement, an avant-garde form that emerged in Japan in the 1950s to challenge the popular aesthetics of that era. 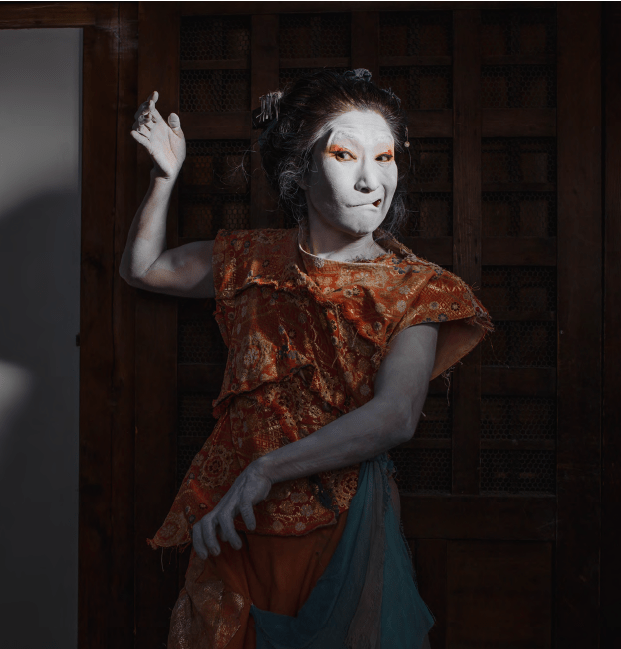 Just off Sanjo-dori in central Kyoto, Art Complex 1928 (which also created the show, GEAR) has renovated an Edo Period storehouse into an intimate performance venue, seating no more than eight guests. It is here at Butoh-kan that Ima Tenko gives two performances, back-to-back, each week.

Her subversive art is virtually impossible to define; it’s a theatre of protest, assault on the senses, bewildering, visually raw, emotionally overwhelming, a startling cultural export, and, to Ima, “an opportunity to explore the frontiers of my art and self.” Hallmarks include full body paint, contorted movements, red-rimmed rolling eyes, and blackened teeth set in a mostly-silent scream. However for all butoh’s darkness, the essence of Ima’s fascinating practice is progression.

Much has changed since she first explored the dance form as a student in 1979. “I fell in love with that mysterious world. I felt like I had not met myself until that time,” she recalled. Ima quit college and joined upcoming group Byakkosha, which would go on to international acclaim and controversy. “We all lived together, focussing on training, and producing shows. That was my lifestyle for 14 years.”

Ima participated in many international tours with the iconic company before it disbanded in 1994. Seeing herself as an “inheritor” of ‘butoh’, she went on to dance independently, forming the Butoh Company Kiraza. The educational side of Ima’s practice, which today offers two workshops a week, has three core members, and 15 regular students, has proven essential. “It is extremely important, for the next generation especially, to have a business model in order to keep ‘butoh’ going,” she said.

The dancer believes that transforming the show from a big-budget spectacular, as it was with Byakkosha, into the intimate encounter she performs today is much more sustainable. It also dramatically changes the dynamic between dancer and audience member. “This kind of atmosphere, an energy transfer, is very important in the world today – a time when closeness and exchange are becoming more rare.”

Ima’s most recent show was inspired by the fact that the earthen performance venue has survived the upheavals of 150 years. “…escaping pristine from the fires of the riots as if it were sacred ground protected by the divinity of water,” she explained. The 45-minute production is an utterly immersive, magnetic and unnerving experience – anticipation runs wild, shrill screams startle, and fluid movements entrance audience members who sit frozen, merely inches from Ima in the 16-square-meter space. Clothed in derelict, repurposed kimonos, and later only a loin cloth, she is accompanied by a live shamisen duo (—who also performed at Kyoto Journal’s back-to-print launch party!)

Heretical ‘butoh’ is seen to express an exhilarating, unrecognised kind of beauty. “It comes from the inside… so what comes out is a result,” grappled Ima, explaining that the majority of her choreography is predetermined but scope to draw from the mood remains. “Every time it is different; that time my emotion was a little aggressive!”

She hopes audience members depart with a more open understanding of the body as a form of expression. “Sometimes the ‘butoh’ dancer is like a transmitter; I hold an empty body and things are translated through me to the audience,” she told. “The classical forms of ‘kabuki’ and ‘noh’ are preserving ancient movements, but they are perhaps not so timely or contemporary. Without a decided form, ‘butoh’ is able to soak in the current mood of society and reflect it in a way that the traditional forms cannot.”

Kyoto Butoh-kan’s management want to see Sanjo-dori become the Broadway of Japan. After receiving strong interest, particularly from foreign visitors, it will be adding another night of performances to the bill.

Elle Murrell is Managing Editor at the Australian interior design plaform, The Design Files. She volunteered with Kyoto Journal in 2016-17.