By Any Other Name… 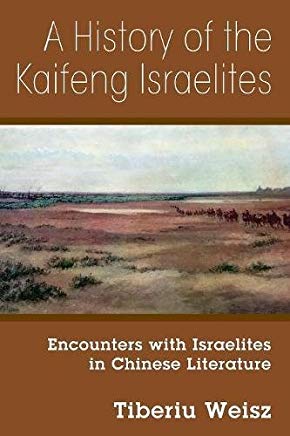 A History of the Kaifeng Israelites:  Encounters with Israelites in Chinese Literature by Tiberiu Weisz. Outskirts Press. $29.95.

In writing this book I set my goal to identify the name of the Israelites in Chinese literature, and trace their history to their earliest presence there.

This intriguing monograph tells the story of the Kaifeng Israelites whose origin has been shrouded in mystery and a matter of some controversy since they first appeared under Western eyes when Matteo Ricci met one of them in Beijing in 1605. Their history was recorded in four stone stelae, first translated by Bishop White, an Anglican missionary working in China, in 1924. According to White and the bulk of scholarly opinion since then, the Kaifeng Israelites had existed in China since some time in the Northern Song Dynasty (960 – 1127CE).

Tiberiu Weisz contends that contact between the Hebrews and the Chinese started probably sometime around 980BCE. If this is true, Israelite presence would have left traces in the historical records kept by the Chinese since their earliest dynasties. Where other commentators, both Chinese and Western, ancient and contemporary, have failed to find such traces, Weisz claims to have found records of very early interaction between the two civilisations. Here he takes us through the evidence, from the very earliest 詩經shī jīng (Book of Poetry) to the stelae themselves.

Part of the problem, he asserts, is that ancient Chinese historians and commentators had no characters with which to describe the Israelites, and furthermore, that where such traces of the Israelites’ presence did exist, they have been hidden by mistranslations and misconceptions, and, crucially, in linguistic changes occurring throughout China’s long history. Weisz offers new translations of hitherto largely ignored, misunderstood or mistranslated characters in the literature, in particular the character 猶 yóu, and the collocation 椎髻 zhui ji, and new interpretations of the literature based on those translations.

The character 猶 yóu in classical Chinese means something like “as,” “like” “similar to,” and the combination 猶人 yóu rén was frequently (mis)understood as meaning “like this person,” “like this man.” Weisz contends that this character stood for the Jewish religion, and that the combination actually means “Jew.” He traces it through several canonical works of Chinese historiography and literature, carefully unpacking the real meaning from the accumulation of misreadings. The collocation 椎髻 zhui ji appears in the 書經shū jīng (Book of Documents), where it is used to describe a “strange headdress” worn by a people beyond the far Western reaches of the Chinese Empire. Weisz asserts that this is in fact either a description of the payot, the earlocks worn by Orthodox Jews, or the mitznefet, the turban worn by the Jewish high priest when serving in the Tabernacle. However, when the Book of Documents was rendered into simplified characters in the 1950s, these rather obscure characters were changed to the more well-known 多须 (鬚) duō xū, which are close synonyms in Chinese, but which more accurately means “lots of whiskers.” Subsequent scholars working from modern editions of the Classics have therefore missed these references to the Israelites.  “This simple substitution greatly impacted the story of the Kaifeng Israelites. It altered the meaning of the text, changed the historical context and more worrisome, erased the identification of the tribe…,” writes Weisz. Weisz lays out his theory with meticulous readings of classical Chinese texts in the light of Jewish culture, displaying the most awesome erudition and deep understanding of Chinese culture as he does so. In this he is extending his earlier work on new translations of the Kaifeng stelae (2006) and a comparative study of Chinese and Hebrew cultures (2008).

The problem, as I see it, is a certain circularity in his argument. The character 猶 yóu quite uncontroversially stands for  “Jew” or “Jewish” in modern Chinese. Lin Yu Tang in his dictionary of 1972 assigns this meaning to the character, and it has this meaning in the vernacular. Weisz finds the evidence because he is looking for it, but there are dangers inherent in reading our present knowledge into the past. Likewise, Weisz’s method of cultural comparison might be regarded by some as an illuminating practice but by others as the worst kind of Orientalism. When he implies that Laozi’s famous description in chapter 80 of the 道德經 (dào dé jīng) of the ideal kingdom could be a description of the Kingdom of Israel during the time of King Solomon; and that Laozi must have “incorporated several of Solomon’s sayings in his writings” because he is known to have journeyed to the West and may conceivably have encountered Jews there (ignoring the facts that 道德經 dào dé jīng is believed to have been composed before Laozi’s legendary journey and that Laozi himself is an entirely mythical figure), one feels that Weisz’s enthusiasm for his theory has got the better of his caution as a historian.

Although the matter must ultimately remain unsolved, Weisz’s book is nonetheless fascinating, especially for students of Classical Chinese, for readers interested in Jewish or Chinese culture, and for anyone with an interest in preserving cultural identity when living for an extended period in an alien culture.