Cherry Blossom Epiphany: The Poetry and Philosophy of a Flowering Tree, by Robin D. Gill 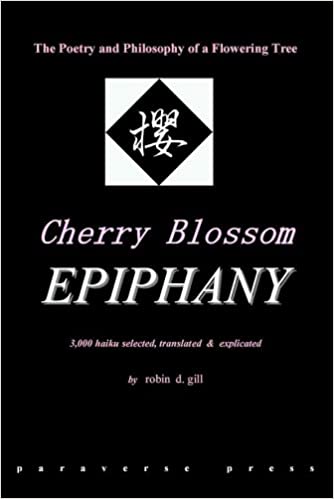 “The Japanese have written thousands of poems about the cherry blossoms” is something I have said thousands and thousands of times over the years to my college classes in Japanese language, literature and culture. Little did I ever expect to find in my big farmer’s mailbox in Ohio, a huge volume of three thousand haiku on the single subject of cherry blossoms! But I did! And I lugged the wonderful tome to the house, and spent a cold winter reading poems about flowers and remembering many springs here and there in Japan.

Writing teachers still say “show don’t tell” and so I will show you how the amazing Robin D. Gill, poet, scholar and translator, produces, for our understanding and pleasure, a single haiku. I open the huge book somewhere in the middle and find on page 215 a haiku by Buson. 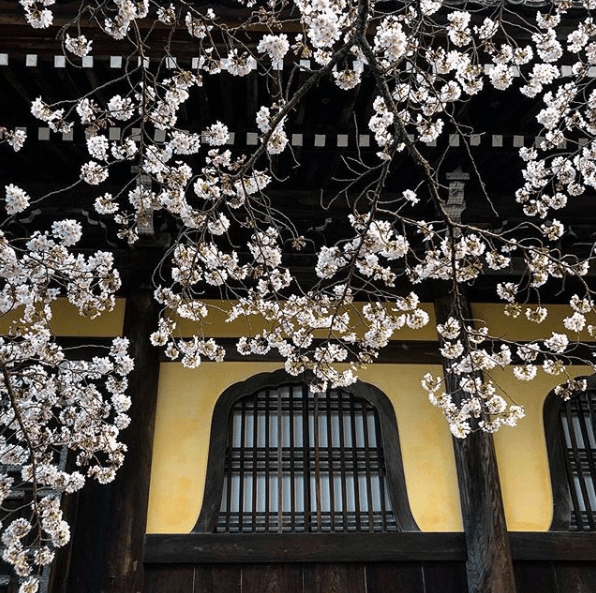 The little poem is given to us in Japanese followed by a Romanized version as well as a literal translation. Then we are given two different literary translations: I quote:

I visit a friend

there are the sandals that

that tread upon petals

Robin D. Gill then adds, “There are some long prefaces to the original which I abbreviated into a title. The sandals, zori, are good tightly woven straw sandals (not the wear-a-day, throw-away macrame waraji). Sleeping-in was a fuuryuu (hip, cool) thing to do, so the poem has a bona fide greeting element explains a Japanese annotator. That is to say Buson wrote it partly for his sleeping friend.”

Then Gill gives us another haiku (and three translations) by Issa on the same topic. This is followed by a long footnote entitled “Sleeping in as Hip.” “According to the C16 Jesuits, who had to adjust to being visited in the wee hour of the night by Japanese nobles wishing to discuss theology, the typical Japanese hidalgo (gentlemen) was night-owl.”

Next we go back to the main text and the sandals where gill tells us, in delightful informative prose all about the word waraji in the Issa poem. “Awaraji are cheap, rough throw-away sandals. Adding the explanatory “straw” to “sandals: would hurt the translation who would describe a cowboy’s boot as leather! –but it is important the reader can visualise what is what”

“My translations are an open book. I dislike transparent— i.e., invisible—translation that allows readers to believe all that matters has been Englished when it just ain’t so. Here, you will not only learn what I know but what I do not know, and what I know yet still cannot fit into the translation. In some cases, this otherwise lost information or wit may be re-created with a device rarely seen in haiku, a title, and a more unfamiliar device, yet one I recommend to all translators who work with exotic tongues, multiple translation. You will find I sometimes play with poems. Interesting results are all the justification a translator needs, but let me add that it is precisely because I provide word-for-word translation (an ugly tool, not to be taken for the language itself) and ample explanation, that I feel free to take the liberties I do.”

Being a translator of poetry myself, I deeply appreciate his advice although I don’t always follow it. I think I like being a bit more “invisible” myself I usually just try to English the verse the best I can and get the hell out of the way. But I know I lose much that gill chooses to give. The stories behind his selected haiku are both informative and fun. It has been a warm winter not only reading about cherry bosoms but listening to the scholarly findings and ancient tales discovered by robin.d. gill. I feel too, by reading his thoughts, I have gotten to know a neat, very informed, guy somewhere out there in cyberspace.

All in all the reader can read Cherry Blossom Epiphany: The Poetry and Philosophy of a Flowering Tree, as a text in cultural history as well as a wonderful collection of haiku. I could almost hear the singing and see the passing of sake.

PS. And even before I finished Cherry Blossom Epiphany I found another huge book in my mail box! the 5th season by robin. d. gill. paraverse press 2007. It is a 465 page collection of New Year’s haiku! I look forward to cooling off this summer reading poems and stories of the New Year’s season!

Harold Wright, emeritus professor at Antioch College, an old friend and longterm contributor to KJ, is known for his translations of both Tanikawa Shuntaro, and the Emperor Meiji.