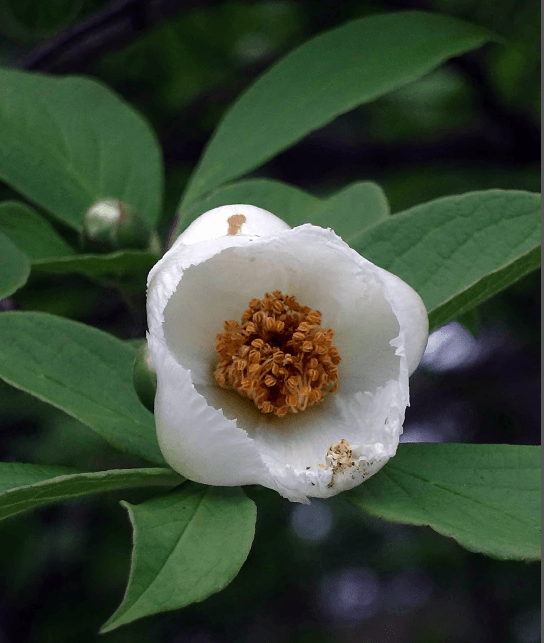 A light rain is falling, cooling off the sultry heat of early summer in Kyoto. As I walk up the stone pathway to Torin-in, I can just make out the fragile blossoms of the sarasôju tree on the other side of the wall. Before going inside the temple, I remove my shoes and fold up the paper umbrella, leaving it in the stand in the entryway next to the others.

I walk across the tatami mat room and sit in a far corner, away from the flock of Japanese women who are exclaiming “Kirei, ne!” Beautiful!. We have all come here to enjoy the transient beauty of the sarasôju, some of us more vocally than others.

The sound of rain is refreshing, but it is weighing down the delicate flowers.

on the mother tree

They fall softly on the moss, one by one. I watch them, lost in reverie. Suddenly I am startled by a deep croaking sound—and then another. At the same time, my eyes fill with the blue of hydrangeas.

beyond the temple wall

Then the brown-eared bulbuls join in with their raucous chorus. In ancient Japanese poetry, they are called hiyodori, a much more romantic name. Their heavy gray bodies shake the branches of the sarasôju tree.

that live only one day

Flapping their wings and fighting for the exotic nectar,

knock down the flowers

will drop off next

The falling blossoms carry my eyes downward to the display on the moss. Their arrangement looks suspiciously like the photograph on the pamphlet taken last year. I imagine the head priest or gardener rearranging the blossoms every morning before the temple opens.

did they really fall randomly

In the grayness of the afternoon, the white of the sarasôju is so bright and the moss luxuriantly green. My eyes stray to the wall with its restful patina of age; it reminds me of my favorite wall at Ryoan-ji Temple.

on the temple wall

a blush of rust

From the wall composed of many rocks, I focus on a single rock in the garden, which is unusual because of its elegant boat-like shape.

hollows in the rock

Each blossom has fallen at a different time today. Those fallen early this morning are already brown, others are browning at the edges and the most recent ones still look fresh.

The temple priest rings the bell to indicate that it’s closing time. Looking around, I am surprised to discover that I am the only one there, completely absorbed in this garden of impermanence.

but waiting for my blossom

Note: When the Buddha died, there were two sarasoju (sal) trees growing at each of the cardinal points surrounding his bier. A cutting from one of these was brought to Kyoto and planted in a small garden at Torin-in Temple where it blooms every year in early July.

Margaret Chula lived in Japan for twelve years where she taught English and creative writing at universities in Kyoto. Her books include Grinding my ink (Haiku Society of America Book Award); This Moment; Shadow Lines (with Rich Youmans); Always Filling, Always Full; and The Smell of Rust.
Margaret lives in Portland, Oregon, where she continues to teach and give work- shops at universities, poetry societies and Zen centers.