From “Rain and Thunder”

I once liked walking in the rain, the harder the better;

liked facing the drops and letting them drench my hair,

I liked letting them flow into my ears;

letting them run in rivulets inside my mouth, letting my tongue have a taste;

liked closing my eyes and letting them rinse both lashes and hairline.

I once liked it so much, the sky’s precipitate:

that which falls as a spray is a pleasure;

and torrents, like the sky has erupted, I also loved;

and those showers in between that make my heart dance

when down from the sky, they make me drip coolness.

Thunder I also liked a lot, no matter what kind:

the peals that explode, making me jump

as if someone had lit a firecracker in my heart’s core;

the low growlings that come from behind faraway clouds

for which I have to hold my breath waiting

to hear whether they’ll roll closer

or groan and grumble themselves into silence;

the long-drawn rumblings and those reverberant blasts

as if a ten-headed ogre were bellowing

with all ten mouths in turn.

Does by rain untouched / unreached by thunder

keep revolving in my mind?

Why keep on thinking of these two half-lines,

thinking of them now for days… 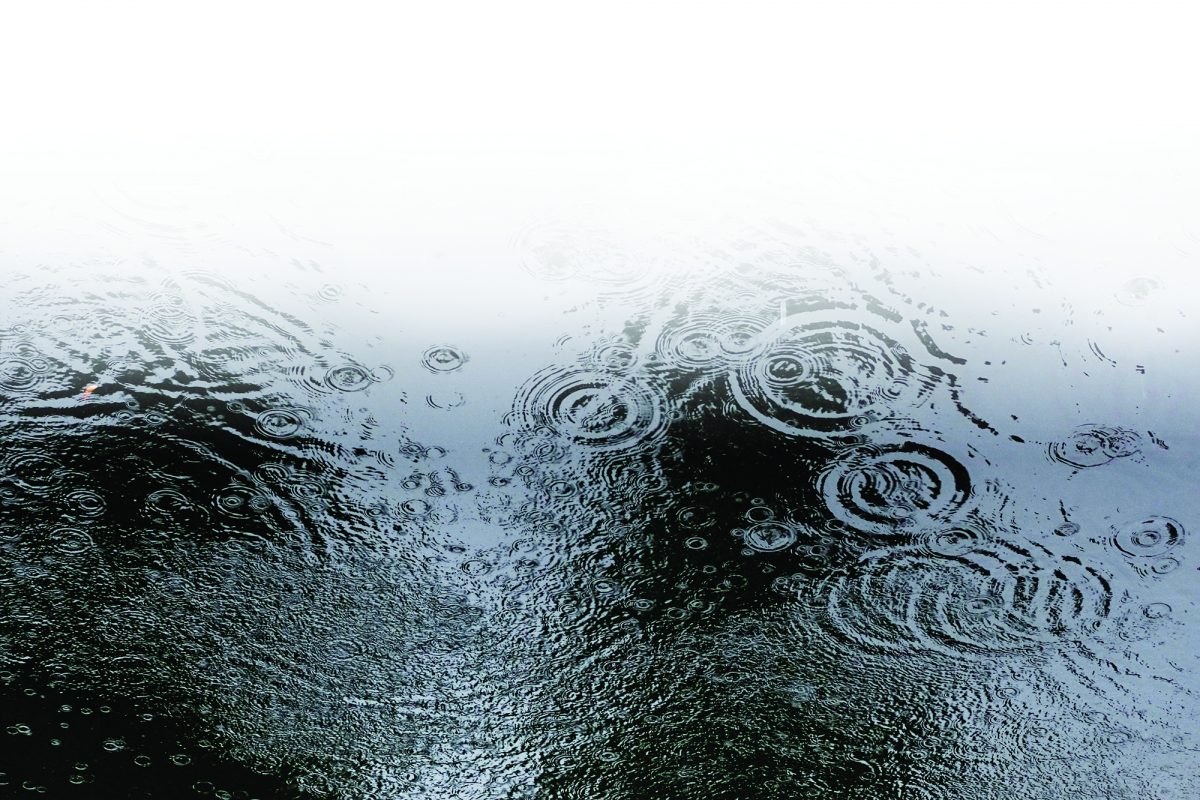 This year was the first Visākha when, to preach atop the Golden Mount, the Reverend

was unable. His strength has retreated so quickly that it’s frightening.

Master Po says to prepare ourselves

and plays a tape of the Reverend preaching

from the previous full moon in May.

There is a downpour before we circle the chapel.

The sound of monks chanting mixes with the slushing of rain,

of wind shaking the leaves and treetops swaying high above us.

Freezing drenched are the people, the monks, the trees, the very sand.

We young men and women, plus the old and aged, press our palms together,

not one of us retreating. The ground is so wet that the monks have to chant

standing up beneath the rain-bitter sky:

monks by the hundred from the North, the Northeast, the Central and South,

their robes so sopping wet, clinging stiff to their bodies,

they seem images carved out of stone.

We light the joss sticks, the candles, and circle the chapel all three times.

The flowers we lean against the slick rock

and plant the joss sticks in the sodden sand,

Still Touched by Rain; Still Reached by Thunder was collected from the daily writings this author tried hard not to keep—in the year that I left the big city to live in the forest, for a space of time not shorter than seven months. The Lord Buddha taught that suffering arises in the mind and must be extinguished in the same place. For city folk, however, the excesses of society and of material culture encourage dependency on friends or possessions to relieve suffering, forget suffering, or avoid suffering, in ways that ultimately cause more of it later on.

In 1990 I was beset by problems. I tried solving them, then escaping them. When neither solution nor escape were to be found, they became a reel of thought on endless loop. At that point, I decided to leave my friends, family, and household to live at a monastery in the woods—not to run away, but to train my mind and build an understanding that would let me face them with compassion.

The first forest I lived in was at Wat Suan Mokh or Suan Mokhphlaram in Chaiya, Surat Thani province, in October 1990. When I went, the Reverend Buddhadasa had already started falling ill.

At first, I stayed in Chaiya for seven to ten days at a time in order to train in mindful breathing at the International Suan Mokh, a place the Reverend had established for people of every nationality and creed. Set on 150 acres of land, it is two kilometers from Suan Mokhphlaram, surrounded by a vista of mountains looming in the near distance. A stream fed by hot springs runs through a coconut grove warm with the lives of many animals. These lush surroundings, and a program that sought the nature of the body and mind, nurtured a sense of connectedness with these creatures. It caused me to realize that they had lived there long before me—had been born, had died, had mated and reproduced for countless generations. They and I were one in the cycle of seeking happiness and avoiding pain, with all the uncertainties that accompany it.

The Reverend would start his sermons at 5 a.m. in the lawn outside his cloister. I called this place the “night jasmine lawn,” because there were night jasmine trees blooming there. Their white flowers with orange stamens exhaled a remarkable scent in the mornings. I still remember the Reverend saying, “The karnika is a flower from India. It is a flower of the Lord Buddha.” When anyone speaks of night jasmine, I think of this lawn.

The sixth time I went for training, I started to feel I needed consistency, so I asked another instructors, Ajahn Ranjuan Inthrakamhaeng, if I could stay an entire month. The answer from my instructor was, if I were to stay, to do so a day at a time.

Those days became three months, and would have gone longer had I not been called to Bangkok on urgent business. Those three months were the most important period of learning in my life, learning from the inside out, not by outside instruction.

The Reverend Buddhadasa allowed me to live among the other laywomen and to conduct my practice under Ajahn Ranjuan’s supervision. She saw that I was intent on a strict regimen, and arranged for me to live in isolation—not speaking or writing, only becoming aware of the sensations of my body and mind.

Silence is important to the study of a person’s inner nature because it opens a channel to see how difficult it is to stop one’s thoughts. Without anyone to speak to, my heart would not stop speaking. It kept demanding communication, if not in speech, then at least in writing. This was the origin of Still Touched by Rain; Still Reached by Thunder.

In the first month, I didn’t have the urge to pick up a pen, perhaps because my mind was restless. In the second month, I recorded what went through my mind every day, and the need to write quietly faded.

When Traswin Chetidecharak of Silkworm Books learned that I kept a journal of my time at Suan Mokh, she selected individual passages for publication in 1995. Ever since, many readers have asked about the origin of the  title. At Suan Mokhplaram the Reverend Buddhadasa had dug a pool, with a tiny island in its middle. On this island is a single coconut tree. He called this pool the Nalikê Pool, after an old lullaby from the south of Thailand:

that only he may sit under who’s earned enough merit

The nalikê is a variety of coconut also from the South. The Reverend Buddhadasa explained that the nalikê coconut in the song is a symbol for nirvana. Nirvana isn’t any one place or other, but exists in the soul. It lies in the middle of a sea of wax, which represents the human mind, whose very nature is as changeable as wax: now hard, now soft, depending on the cool or heat that touches it.

But the nalikê tree standing in the sea of wax doesn’t change. “By rains untouched, unreached by thunder.” This is the state of one beyond spiritual merit. “One beyond merit” means one who is attached to nothing, who makes no new karma. One who has perfectly renounced everything.

As a seeker for Truth still swimming through the sea of wax, I decided to title this book Still Touched by Rain; Still Reached by Thunder.

I returned to pay homage to the Reverend Buddhadasa only another two or three times before he passed away. On one occasion, after he had read Still Touched by Rain; Still Reached by Thunder, he had the compassion to say the book was well-written, that it was useful, and this relieved me greatly. The final occasion came when I bid the Reverend farewell at the foot of his pyre on the Golden Mount. I watched the fierce yellow flame lick the wood and rise to fight the falling rain, while the Reverend’s voice, discussing death, played from a tape recording.

I will always remember the Reverend taught me to be aware of my mortality until the final instant.

Khunying Chamnongsri Hanchanlash writes in both Thai and English. She is chairman of Rutnin Eye Hospital, established Harbor House Foundation in Chiang Rai helping young women at risk of human trafficking, and co-founded Cheevamitr, a social enterprise supporting end-of-life care for the elderly.

Noh Anothai was a 2012 researcher in languages and literature with the Thailand-United States Education Foundation (Fulbright Thailand). Since then, his original work and translations of Thai poetry have appeared in Asymptote, Words Without Borders, Ecotone, and other journals. In 2016, Singing Bone Press released Anothai’s Poems from the Buddha’s Footprint, the first full-length translation of Thai national poet Sunthorn Phu in thirty years, as well as the first to be published internationally.