Rabindranath Tagore; Translated from the Bengali by Srinjay Chakravarti

Foreword:
Rabindranath Tagore (1861-1941), the first Asian to win a Nobel Prize, is widely considered the greatest Bengali poet of all time. He is certainly one of the finest writers of the world in the past century. Apart from poetry, Tagore wrote novels, essays, short stories, plays, belles-lettres, travelogues, humorous sketches, political commentary, creative non-fiction, literary criticism — almost everything literary. He was also an accomplished singer, musician and painter. His story “The Wrong Paradise,” written in 1921, was a harbinger of the post-modern surreal imagination and one of the earliest instances of absurd fiction in any Asian language. It is taken from his 1922 collection of microfictions, Lipika. 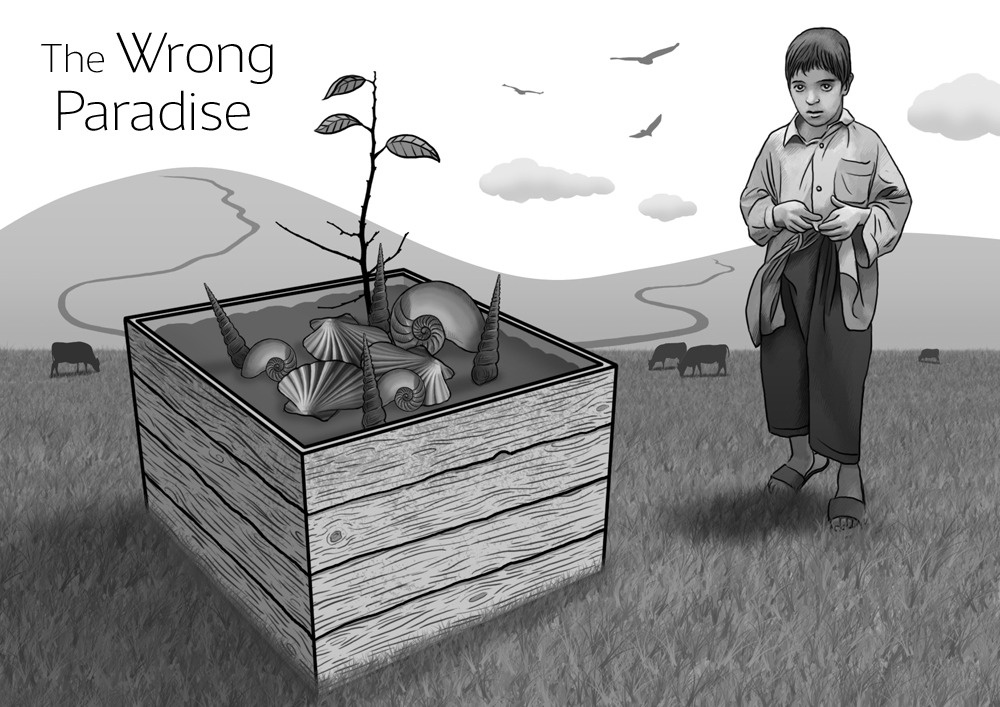 I. The youth was absolutely good-for-nothing.

He had nothing to do, no work at all; yet he was busy all the time.

He would collect small hollow squares of wood, into which he would pour dollops of mud, and set little seashells. If you looked at one of these from a distance, it would appear to be a hazy picture, with perhaps a flock of birds in its sky; or maybe a blurred field, where cows were grazing; or the jagged outlines of mountains, with maybe a wild waterfall here or a snaking pathway there.

II. There are some schoolboys who don’t study the whole year, but somehow manage to pass their final exams. Something of this sort happened to him.

He wasted his entire youth doing nothing useful, but when he died, he learnt that he had been allowed to go to heaven.
Still, his haplessness didn’t leave him alone even on his way to paradise. The empyreal messengers made a mistake, and delivered him to the heaven of the diligent.

In this heaven there is everything anyone could wish for, except leisure.

Here the men always exclaim, “Where’s the time to stand and stare?” The women tell each other, “See you later, there’s lots of work still left to do.” Everyone here says, “Time is invaluable.”

Nobody here says, “Time is valueless.” “I just can’t cope anymore!” rues anybody and everybody, and all revel in this lament. “I’m tired of working myself to the bone!”: this complaint is the anthem here.

Now, this new youth couldn’t find any place where he could fit in. If he tried wandering on the streets, he found he was blocking the rapid progress of some extraordinarily busy people. If he spread out his blanket on a field to try and rest for a while, someone would come and tell him that it had already been tilled, and the seeds sown; he would ruin the harvest. He would be evicted from wherever he settled down, and would always find that he had to shift someplace else. There was no space for the indolent here.

III. An extremely busy girl came to the well-spring every day to fetch water.

When she walked down the road, her anklets sang like the rapid notes strummed on a sitar.

Just before leaving home on this day, she had swiftly tied her restless tresses into a bun. Yet, a few adventurous strands were drifting down her forehead to peep into her black irises.

The jobless youth of the wrong paradise had been standing by the road, next to the tinkling waterfall, still and silent like a dark tree.

The pretty, doe-eyed girl felt pity for him, much the way a princess feels pity for a beggar when she sees him standing outside her palace window.

The youth replied with a sigh, “Where is the time to do any work?”

The girl didn’t understand what he was saying. She asked, “Do you want some work from me?”

Now she was pleased. “What task shall I give you?”

“What will you do with these pots? Fill them with water?”

“No, I shall paint pictures on them.”

But how can a person who always works hard ever deal with the purposeless idler? Every day they met at the waterfall, and every day he said the same thing: “Give me one of your pitchers, I’ll paint on it.”

She gave in at last, and surrendered to him one of her earthen pots.

He took it immediately and began to draw lines and striae, whorls and streaks, in all sorts of colors, and shapes, and designs.

When he was finished, the girl picked up the jug, and turned it round and round. Then she frowned, and asked, “But what does this mean?”

The layabout replied, “It doesn’t mean anything.”

The girl went home with the vessel. Carefully hiding it from her family, she examined it in different kinds of light, moving it this way and that, rotating it, revolving it. At night, she would get up from bed now and then, light her lamp, and look at those pictures.

In all her years this was the first time she had seen something that was quite meaningless.

The next day when she came to the well-head, it seemed as though a pause had crept into the celerity of her footsteps. It was as if her feet, while moving, were thinking of something, distracted by something — but what exactly was it? It was something that made no sense.

That day, our idler was again standing by the wayside.

The girl asked, “What do you want?”

He replied, “I want some work from you.”

“If you agree, I will tie colored threads together to prepare ribbons for
braiding your hair.”

“How will that help? What will happen then?”

Yet, many ribbons were knotted, with many strings of many weaves and many colors. Now she sat with her mirror in hand, lingering for a long time over the process of braiding her tresses. The hours rolled by, and tasks remained unfinished. A great deal of time was wasted.

IV. Within a short while, large gaps began to appear in all the work of the paradise of the sedulous. Those gaps were filled with tears and songs.

The chieftains of that heaven got rather worried. They held a meeting.
They said, “Nothing of this sort has ever happened in the history of this place.”

The archangel who had brought in the shiftless youth came and admitted that he alone was at fault. “I have brought the wrong man to the wrong paradise.”

The idler was brought to the conference. When everyone saw his multi-colored turban and cummerbund, they realized at once what a terrible mistake had been made.

The oldest chieftain told him, “You’ll have to return to earth.”

The youth looked rather relieved. He picked up his palette and brushes, packed up his colors, and said with evident delight, “Ah! now that’s much better.”

But the girl, too, came forward and said, “I’ll go with him.”

The venerable old chieftain was at a loss — it was clear he was quite distracted. For this was the first time he had seen something that made no sense at all.

Translator:
Srinjay Chakravarti, 35, is a journalist, economist, writer and translator based in Salt Lake City, Calcutta, India. He was educated at universities in Calcutta and New Delhi. Chakravarti’s poetry, prose and translations have appeared in The Continental Review and numerous publications worldwide. His journalistic columns include essays and articles on economics, politics, physics and literature. Chakravarti’s first book of poems, Occam’s Razor (Writers Workshop, Calcutta: 1994), received the 1995 Salt Literary Award. He also won one of the top prizes in the 2007 Dorothy Sargent Rosenberg Memorial Poetry Competition for his poem “Ikebana of the Blind”.

Illustrator:
Amane Kaneko, whose images have graced a number of KJ articles, grew up in many different countries, including India, England, Japan, Sri Lanka, and Hong Kong. He graduated from Parsons School of Design, New York with a B.F.A in Communication Design. http://amanekaneko.com