An Interview with Arai Manta 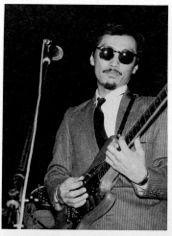 Why did you move to Kyoto?

Miyakokochi [retiring to the country]. I’m half joking when I say that — it’s an old expression. What I mean is that after Japan lost the war, people left the coun¬try [to find work in the city]. I left the city for the country.

When I returned to Kyoto in September from vacation, Jazz Kent (a coffee house on the corner of Marutamachi-Karasuma) had been razed to the ground. I’d been going there for ten years…

Yeah, I know the place! It was there a long time. It’s gone, huh? You know, there also used to be this really tiny sushi bar just around the corner from there. It seated maybe five or six at the counter at most. Yo-chan [the neighborhood acupuncturist] told me it was always full, a great spot. That place was torn down too, and a birudingu went up. I was shocked to hear about it.

The owner of Jazz Kent once told me he’d never let his place be torn down. Do you ever worry that Club might have a similar fate?

Oh, I’m more worried about just holding our business together! We’re always just dangling by a thread. But it wouldn’t sur¬prise me if this corner had been torn down and rebuilt three times by now. Kyoto is just dreadful! Everywhere in Japan, really. But here, in things, in people, all the best qualities are disap¬pearing with such speed. You can count on Kyoto to destroy itself.

I’m a Tokyoite, you know. Tokyo is the only real city in all Japan. Everywhere else is basically country. I don’t dislike Tokyo. It’s got a lot of people and is crazy, but it also has its fantastic aspects. Living there was so physically draining, though. What really surprised me when I first came to Kyoto was that Kyotoites thought they lived in a “city.” Especially students, who came from even further out in the country. They thought Kyoto was a city! For me Kyoto was the country.

One characteristic of Kyoto is that it’s a university town, but Doshisha [univer¬sity] felt they had to move their campus out to Tanabe. So what happens to the little eating spots and lodging houses when the students disappear? They’re torn down and replaced with pavement, buildings. How can you admire a temple hemmed in by tall buildings? A temple roof above a low machiya — that’s beautiful. But’ they’re screwing it all up now.

About twenty years ago Kyoto had a great reputation among young people in Tokyo. It was a good place to be, a place that had a lot of powerful energy. And you used to always hear about Kyoto blues bands — they were the best in the country. Kyoto still had a lot of nature too. But it’s no good now. The area around Hyakumanben has deteriorated horribly. Everything is being destroyed, root and all. I will never forgive the corruption behind this. The citizens of Kyoto have only themselves to blame.

What mood are people in these days? What do customers talk about?

Well, I think you could boil a lot of what people talk about down to identity, at least for my generation. In the last three years I’ve started thinking differently about things. I’ve been reexaming a lot of notions I have about myself. Up to now I’ve disliked Japan, been very criti-cal of the Japanese. My response to Japanese things, Japanese people, was to always refuse them outright. After Japan lost the war, Japanese lost all belief in themselves and their country, in the emperor, everything. The real power that filled this vacuum was America. That’s when everything started to go haywire. We grew up on hamburgers, pie, gratin. There was even a time I only ate bread, never rice. I grew up never having worn a kimono. I got interested in Black music and made a blues band. (We sometimes still perform here at Club.) Everyone was trying to lead an Ameri¬can lifestyle — that’s the situation my generation grew up in. But you know, people feel an uneasiness about this now; some people want to believe in some¬thing more. To put it simply, the Japanese have become foreigners in their own country. That’s why it’s so easy for them to destroy everything old around them now.

I came to Kyoto because it was a good size, more managable. I didn’t take in an old temple till I’d been here ten years. But I remember feeling something good about just seeing one. My reaction to noh the first time I saw it was “what on earth is this!” — probably no different from what Americans feel. When I began to study noh a couple of years ago, even though I couldn’t understand the language, there was something in it that suited me deep down. When I put on a kimono for the first time, it felt good — it fit me, my physique. There’s some¬thing in me that was there before I was even born.

So some people talk about stuff that relates to their own identity. I no longer am looking to America for an answer. Really, I feel a bit embarrassed telling you all this. Anyway, I’d have to say traditional culture is something I want kept around.