The Way of Food

Sen Sumiko (1920-2004) was the daughter Yukosai, the ninth grand master of the Musanokoji branch of the three Sen families descended from Sen Rikyu and the mother of the present, eleventh grand master, Futessai Sōshu. She was brought up in a strict traditional family but her education was also strongly influenced by her father’s deep interest in Western classical music and philosophy. She couldn’t recall how old she was when she helped at her first tea gathering. 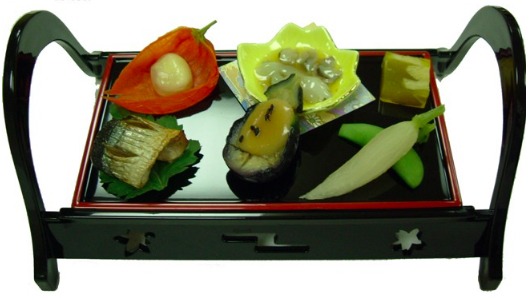 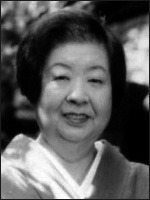 [I]’ve lived the last half century or so at Kankyuan, the Sen family home in Mushanokoji-machi, a very quiet place where the only sounds used to be the looms of Nishijin. Daily life there is completely devoted to the Way of Tea. My mother was cousin the to eldest daughter of the twelfth grand master of Omotesenke, Seisai. Since they were close in age, they were always together and both of them received the strict Sen family upbringing. I’ve heard they got their hands slapped with a ruler if they misbehaved. They both went to the prefectural girl’s high school and as soon as they got home they folded up their hakama skirts so they would stay nicely pressed for the next day.

Because Seisai’s wife was sickly, my mother and her cousin helped with all kinds of tea functions. With tea people, the family home and “business” are one and the same place, and since they are responsible for teaching etiquette, everything had to be just so. Everyone at the grand tea master’s house has to set a perfect example for the many guests who came, always showing kindness to everyone.

They lived their whole lives in kimono and neither of them would think of walking outside a room with her obi imperfectly tied. But they never pressed this training on us. They set examples and always held themselves responsible if anything went wrong. They never criticised anyone. I never heard either of my parents say anything bad about anyone and I am still thankful for this kind of upbringing.

I started the Sen cooking school in my own kitchen in October, 1951. The first menus were made with the advice of the old master of Kakiden caterers. We served the food in one of the tea rooms while my father, the grand tea master, directed things. Afterwards he said the students were like little children: “very cute, but do you think they really understood?”

Tea kaiseki cuisine plays a very important role in a formal tea gathering and without it the pleasures of tea would be halved. Tea kaiseki was originally just home cooking, but made with a lot of feeling, tea kaiseki is a seasonal cuisine in which the harmony of ingredients and utensils is always important. I would like everyone to know that tea kaiseki has been very well thought out. It is a form of hospitality, not just something extravagant, showy or expensive. The cuisine of a tea family is part of their daily lives. It nourishes both appreciation of nature and artistic sense. This is one of the great benefits of studying the Way of Tea, but without discipline nothing substantial will come of it.

Nowadays there is a wide variety of food available — frozen, canned, imported or greenhouse-grown. Because of this, home-cooked flavors, especially local flavors, are disappearing. The Japanese lifestyle is changing so much that you can even see it in people’s faces.

In the confusion after the Second World War, times of starvation and chaos, family-style cuisine began a transition. Many new techniques were introduced, as well as new ingredients — okra, zucchini, broccoli, cauliflower, asparagus, kiwi, mango, grapes, and newer varieties of old standbys like cucumbers. The old favorites suddenly became available year round, but a pattern has not yet been firmly fixed. I think it is up to women to return to the original sensitivity of the palate. New Japanese cuisine will have to develop from the basics of old family-style cooking, incorporating the new while returning again to the heart of hospitality. This older style features a number of preserved and seasonal vegetable and fish dishes meant to complement the flavor of rice, which is so much the staple that the word for meal literally means ‘cooked rice.’ In fact, the strict meal and was rice, miso soup and pickles. All else was just accompaniment.

Wrapping food in a leaf is a food example of what is fūryū — elegant without extravagance. When yaezakura [double cherry] leaves come out, you can use pickled ones to wrap moist, jelly-like sweets or to steam white meat, fish or chicken, or as a sushi covering. Colored leaves such as those of the persimmon can be used as doilies to keep oily food off the plate, or to separate flavors on the same platter or in a lunch box. Needless to say, when you use grasses, tree leaves or flowers you must wash each one carefully and be very sure not to use anything containing irritants or poisons, or that is bad-tasting, or which has thorns. You need to know your plants thoroughly!

I’ve had occasion in the past to cover a big plate with peony petals and put dabs of caviar, foie gras, salmon eggs and such, in each one for appetizers. They give a feeling of sumptuousness appropriate to a party, yet are still natural. I felt the flower’s true essence was doing us a service, dancing with the food almost.

I went to a top class restaurant in Tokyo once when bamboo shoots were just in season. They had gone to all the trouble of obtaining extremely fresh white bamboo shoots that Kyoto is famous for that morning, but they only served two or three thin slices per bowl, as if they were gold. A lot of trouble for such a small amount! It would have been much better if they had piled it all up in a larger bowl and passed it around. I would remove the thin-skinned tender parts from the ends, cut them into strips about five centimetres, then put all of them in either a green celadon, or red over-glazed enamel bowl and top it with a huge pile of fresh kinome [Chinese cold pepper leaves]. Cut the rest of the shoot into bite-size chunks, simmer in good stock, pile high in a bowl, and add kinome. Then you have spring elegance all around you. It leaves a much stronger impression.

So much has changed with modernization. “Girl’s Day” or the Doll Festival on March 3rd was originally a lunar calendar holiday, meant to fall on the first “snake” day of the third month of the year (some time in April of the solar calendar). Now it is celebrated in March, the modern “third” month. It was a purification festival like all the gosekku holidays from China,* to keep the girls healthy and to provide play time with siblings, cousins and friends — and to eat the special foods that were in season.

When I was a girl we celebrated this festival when the peach and other flower trees were blooming, and it was just warm enough to have a picnic. Special sweets were eaten, like hichigiri, pinched off piece of colored mochi with sweet bean paste fillings, or hishi mochi — tiered, diamond-shaped sweets in five colors. We ordered little fish loaves decorated with the cutest branches of flowering trees. Well, these have become unavailable at the proper time, now they’re sold in March of the solar calender. What can you do?

Nonetheless some of the things are still in season and these foods should be remembered. For example, there is spicy nuta [miso-mustard-vinegar sauce with green onions and clams], or the [“scattered”] chirashi-zushi, still flavoured as my mother or grandmother would have made it.