A Definitive Ranking of the Ducks of Kamogawa

For most of us here in Kyoto, peace of mind is often found along the banks of the Kamogawa River. We sit in the sunshine, partake in impromptu conbini picnics, or just let the flow of the river take our worries away, to be swallowed up by Osaka Bay. Kamogawa is good to us like that, providing an in-between space to put busy lives on momentary pause.

But have you ever wondered, who are the namesake residents of this Duck River? We’ve taken the liberty of identifying the most common species of duck inhabitants, and ranking them from ugliest little duckling, to virtual bird of paradise.

10. At the very bottom of the list we have the Mallard. There’s nothing wrong with the Mallard, per se, it’s just when we think of ducks, the Mallard is a bit run-of-the-bill. They’re passé. The only other more over-the-hill duck is Donald, who has been working the same dead-end job in Tokyo since the ‘80s. While we’re happy to see a Mallard, because hell, a duck is a duck, there are more interesting breeds to behold in Duck River.

9. Up next is the Spot-billed Duck.This is one of the larger breeds in the river. Interestingly enough, it is nearly impossible to tell the difference between males and females with the naked eye, and they do find it rude when you ask. Let’s be honest, they’re smug. They have beautifully speckled plumage in an understated taupe. They match the river’s color scheme perfectly, and don’t they know it… They’re the contemporary fashionistas of the duck world, looking down on all the other gaudy-colored birds. 8. A tricksy little fellow, the Eurasian Teal disguises itself as a duckling its whole life. No doubt it wants us to ooh and aww over its everlasting cuteness. Don’t let his diminutive stature fool you into thinking he is harmless though, as the Teal is known to trick the other creatures of Kamogawa quite frequently. Having one of the longest lifespans of waterfowl, Teal grow cunning and devious with age. They will take advantage of errant fowl, lost tourists, and lonely salarymen. Beware! 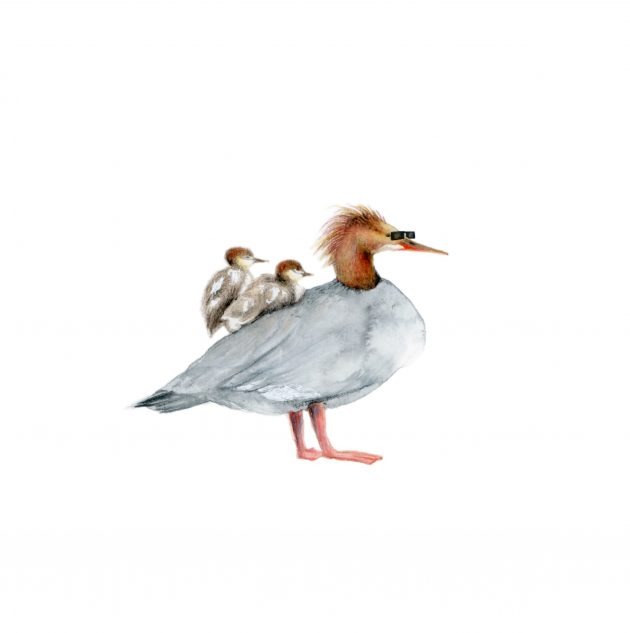 7. Next is the Goosander, a.k.a. the Common Merganser. Noble and elegant, this duck is easily recognizable due to the fuzzy quality of its quiff. The Goosander is meek and demure, albeit a tad aloof. While many ducks in Kamogawa tend to flock together regardless of genus, the Goosander tends to be found in solitude, presumably pondering the fuzzy futility of it all.

6. To encounter a Common Pochard in the banks of Kamogawa would be akin to seeing a real Maiko strolling through Gion. They do exist, but are gradually becoming harder and harder to spot. Like the Maiko, these birds display a vibrant appearance and are admired for their rare beauty and incredible talents. Pochards are gifted in the arts, particularly song, dance, and playing the shamisen. 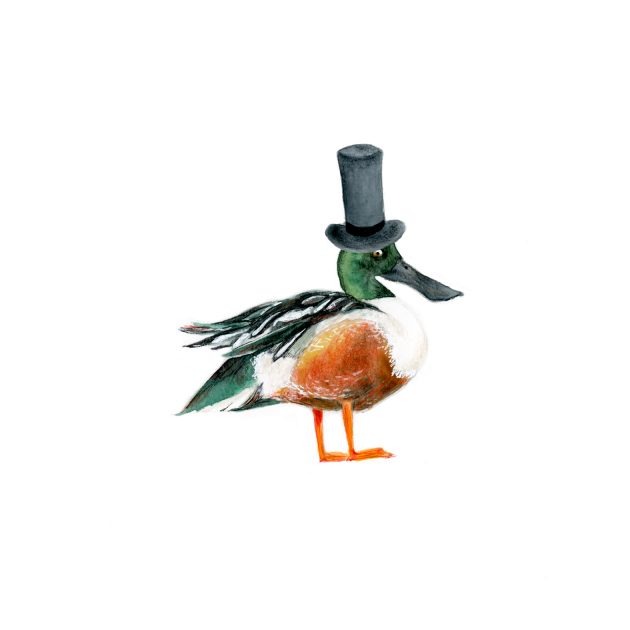 5. The Northern Shoveler is the unsung hero of Kamogawa. Day in and day out, the Shoveler works to support his fellow duck and is a rock within the Kamogawa community. Harnessing power from both his right wing and left wing, the Shoveler is a dextrous and skillful leader. He is often seen campaigning for better nesting opportunities, and kissing little ducklings.

4. The Northern Pintail is definitely the most cosmopolitan bird in Kamogawa river. Naturally gregarious, the Northern Pintail is often found mingling with the upper crust of society. It is a very fancy fowl with a taste for the finer things in a duck’s life. A marvelous conversationalist, the Pintail is well read, fluent in several languages and charismatic to a fault. Let’s face it, ducks want him, and drakes want to be him. 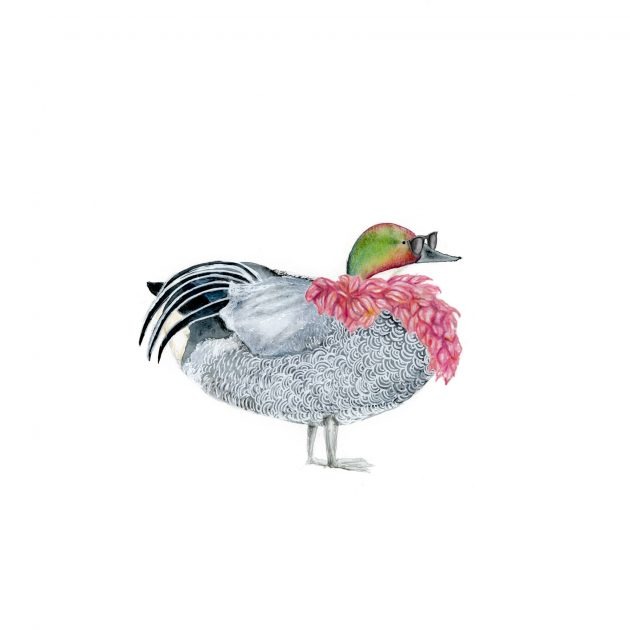 3. The showiest bird in the river, the Falcated Duck was hatched to sparkle. Millions of followers on social media prove that this bird has really gone mainstream. While fans enjoy their viral featherbrained antics, most flock to the banks of Kamogawa just to get a glimpse of that beautiful emerald crown.

2. The rebel on our list, the Tufted Duck doesn’t really care what you think of him. He does his own thing, and is one toughie duckie. His crest of black feathers reminds us that he’s into alternative punk rock, irony, and cold-brew coffee. We have to admit, an encounter with the Tufted Duck makes us feel young again. 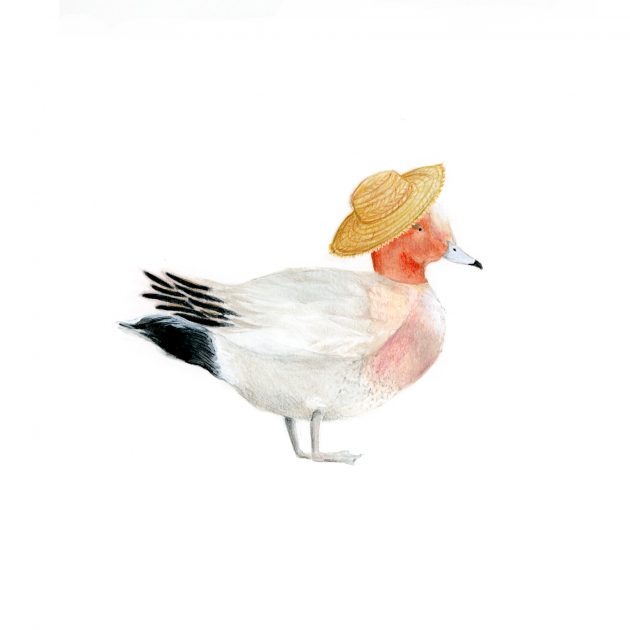 1. The Eurasian Wigeon is the true featherweight champion of Kamogawa. It is humble, down to earth, and a real duck’s duck. The Wigeon doesn’t put on airs to impress its peers. Rather, we are captivated by its charm and commitment to being true to itself. Its nightly call is an enthusiastic whistling “wee-ooh” signaling the end of another beautiful day by the Kamogawa River.

Technically not members of the Anatidae family, these Kamogawa locals are no lame ducks. However, they deserve some recognition and distinction for their contributions to the Kamogawa wildlife scene.

If it looks like a duck and quacks like a duck, sometimes it’s a Little Grebe. Rather inconspicuous, Little Grebe prefer to go with the flow, especially under the surface of the water. Unlike ducks, these diving creatures can fully submerge themselves and stay underwater for up to one minute. Little Grebe are laid-back and tend to be less flighty than your average duck.

The Coot is a type of waterfowl known as a rail, but he is no grouchy old man. The Coot is stylish yet sensible, modern yet charming. Coots are quick witted but always ready to lend a sympathetic ear. Consider yourself lucky to spot an old Coot down by Kamogawa River.

A Bostonian abroad, Sarah Sawamura made Kyoto her home in 2018. When she’s not hanging out with her feathered friends at Kamogawa, she is writing and illustrating very silly children’s books.

Illustrations by Sharon Spitz. Sharon Spitz is an illustrator and a graphic designer with a passion for nature, animals, and sustainability, who splits her time between Haifa and Berlin. Her work focuses on details and textures, and in her illustrations she combines traditional and digital techniques.