Dream Landscapes in 3D: An excerpt from Another Kyoto by Alex Kerr

Alex Kerr, known for Lost Japan and Dogs and Demons, has lived in Kyoto since 1977, but this is the first time that he has written at length about the city. Another Kyoto is a “spoken” book which resulted from conversations between Alex and Kathy Arlyn Sokol as they explored temples and gardens over the years. Kathy describes the book as a “transmission” of knowledge that has been passed down from an older generation of Japanese literati, monks, tea masters and foreign expats—colored by Alex’s own knowledge of classical China and Southeast Asia.

Each chapter “Gates,” “Walls,” “Plaques,” etc, takes up an aspect of the old capital that until now hasn’t been much noticed or written about. Wandering on from such starting points, Alex arrives at unexpected conclusions about Kyoto culture.

The following excerpt on gardens is from the chapter on “Screens.” 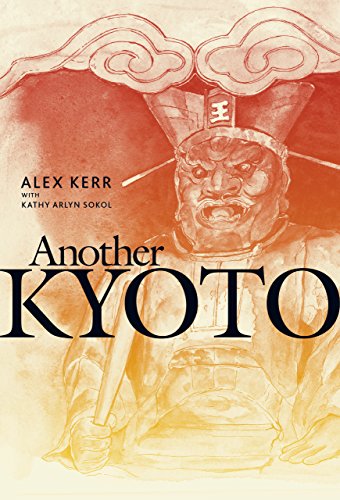 Since Kyoto is best known for its gardens, let’s take a look at the relation between gardens and paintings. The paintings on the fusuma and folding screens—towering peaks, waterfalls hanging in the sky, crooked ancient pines—these were a dream world. Surrealism. Dali, long before we had Dali.

It’s very human to want to experience in real life the fantasies that we see painted on our walls—or, popping up on computer screens. The 18th century lords living in the great homes of England had many a painting of romantic Greek and Roman ruins on their walls. Not content just to enjoy them in oil, they went and built faux “ancient ruins” in their gardens. To make the effect more realistic, they even hired “ornamental hermits” to live on the grounds, who had to sign a contract agreeing for a certain length of time never to cut their hair. The lords wanted their ruins to look authentic.

Something similar happened in Kyoto. The standard name for landscape paintings is sansui, literally “mountains and water.” Sansui is a peculiar word in that, if you just think of the meaning of the kanji that make it up, “mountains and water,” it could naturally have been used for real life “landscape.” In fact, the dictionary defines sansui as “landscape.” But people never use it that way. When you see the word, it typically refers to a painting, not actual mountains and rivers. The term we use for sand gardens is kare-sansui or “dry landscape,” which orients it to painting by its very name.

So the true translation of kare-sansui should be not “dry landscape,” but “dry landscape painting.” In Kyoto’s gardens they scrupulously reproduced all the conventions of sansui ink painting. They pruned branches so they would look like they had been brushed in black ink. They arranged rocks to look like islands in a painted sea. For added authenticity, in the place of painted sages, they had real life Zen monks to rake the gravel.

We know from old records that the garden at Ginkakuji was designed to be a miniature of China’s Dongting Lake and the Xiao and Xiang rivers.  Of course, that garden was not modeled after the real lake or rivers, which no Japanese had ever seen. It’s a copy of paintings of those places. The Shogun commissioned Kano Motonobu to paint scenes of Xiao and Xiang on the fusuma of his palace (now disappeared). For added emphasis, he had his favorite calligraphers write Xiao and Xiang poems, which were pasted on top of the paintings. So the temple had Xiao and Xiang images painted on the walls inside, sculpted in sand and rocks in the garden outside, with poems to prove it.

Of the gardens of Kyoto, the one at Juko-in at Daitokuji well evokes—in the medium of sand and stones—the world of ink painting that one would usually see on doors or screens. Sen-no-Rikyu created it based on a draft brushed by painter Kano Eitoku, who also did the fusuma in the hall facing the garden. The foreground of Rikyu’s garden is just flat earth, maybe once just sand, now mostly moss. It’s the flat, unpainted, lower surface of a screen. In the back runs a row of rocks, some higher, some lower, a range of distant painted peaks. In the middle of these rocks lies a flat stone—the de rigeur bridge that appears in mountain paintings. It’s a dream landscape by Eitoku, executed in stone instead of ink.

Read the many books on gardens, and you find that the experts expend much effort trying to understand the spatial relationships between rocks. What hidden rules guided the gardeners when they put this rock here and not there? I think it becomes less mysterious when we think of gardens as two-dimensional paintings that expanded into three. There were rules, but they’re the “flatland” rules of classical ink painting.

The gardens of Kyoto were attempts to take the fantasyland of painting and recreate it in the physical world, using real-life materials like gravel, stone, moss, trees—and monks. As such I must confess to a twinge of disappointment sometimes when I see one of these gardens. They’re just too “real.” Yes, that’s a lovely old pine tree pruned into a picturesque pose. But could one mighty real branch outgrow its parent tree, like a branch in a fusuma painting, and twisting at shocking angles as it goes, leap across twenty feet of gold? That stretch of sand is quiet and meditative. But could it compare with the atmospheric nothingness of the Dawn Landscape, just hinted at with a few streaks of watery ink, on the white-papered wall in the back room at Shinju-an?

Eitoku, when he saw Rikyu’s garden at Juko-in, must have felt a smile come to his lips, because he knew that Rikyu’s row of drab little rocks lined up against a garden wall could never compare with what Eitoku could achieve with a few bold ink strokes.

Gardens are the movie version of the book. We may have loved the movie, but the book is usually better. It’s because imagination will always trump reality. I think that’s why garden-making never ranked as a “high art” in Kyoto. The best ones were created by monks in their spare time such as Muso Soseki, or tea masters such as Murata Juko and Sen-no-Rikyu, who are better known for other things. We have no record of who designed most of the others, even the supreme garden of them all, Ryoanji, whose authorship is a complete mystery.

We do know the name of Shogun Ashikaga Yoshimasa’s favorite gardener, whose son is credited with the garden in Ginkakuji. He was Kawaramono Zen’ami, and from his name we can glean what the status of a gardener was in those days. Kawaramono, “a person from the riverbed,” was a term used for the poorest of the poor, beggars and homeless. The Kamogawa riverbed was where outcasts lived. Criminals were beheaded there. In later years, Kabuki was born on makeshift stages along the riverbed. Forever after, Kabuki actors bore the stigma of being called kawara-kojiki or “beggars from the riverbed,” and in Edo days it was a crime for them to consort with samurai.

Ze’ami and his descendants, and other gardeners like them were known as sansui-kawaramono or “landscape beggars.” In short, a gardener, unless he happened to be a monk, ranked with outcasts. In contrast, the artists who painted Kyoto’s fusuma and screens, such as Hasegawa Tohaku, Kano Tan’yu, and later, Ito Jakuchu were superstars, celebrated as incomparable masters in their own time.

As important as painting was to Kyoto culture, in modern times it has become rather hard to enjoy it. Many of the great works are locked away in subtemples of big establishments such as Daitokuji or Myoshinji, which keep their gates tightly closed except for rare public viewings. You’ve got to keep your eye out for when these paintings are going to be shown to the public, and then arrange to visit them during the brief window that they’re open. They don’t allow you to photograph the paintings at most temples, nor do they usually sell illustrated books or pamphlets about them. Even postcards are hard to find. It’s all wrapped in deep secrecy.

My library shelves sag under the weight of dozens of volumes on the gardens of Kyoto. So far, I haven’t been able to find even one book on the paintings of Kyoto. So it’s natural enough that visitors end up not looking at paintings. However, when I think of the moments when I held my breath in awe, when I was truly stirred and stood there stock still in amazement, it’s when I first caught sight of one of these masterpieces.

Illustration by Tetsuji Fujihara, from Another Kyoto, published by Sekai Bunkasha