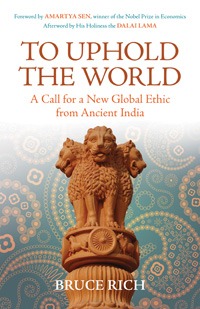 To Uphold the World: A Call for a New Global Ethic from Ancient India by Bruce Rich. Beacon Press, 2010.

[Y]ears after an unexpected encounter with the remarkable reign of Emperor Ashoka Maurya, Bruce Rich has written an insightful meditation on the relevance of the ancient Indian ruler to our own age of global discontent. To Uphold the World is much more than a literary excavation of a legendary leader who extended his empire’s influence from Egypt to China. It is also a persuasive call for our own generation to challenge the central assumptions behind economic globalization and replace them with policies grounded in an ethics of reverence and transcendence. The Dalai Lama writes in an afterward to this book, “In this new millennium, when our world is increasingly interdependent, we must find ways to resolve our problems and conflicts through nonviolence. To Uphold the World should serve as a source of great inspiration.”

Rich was moved to write his study of Ashoka after visiting the famous battlefield of Dhauli in Orissa state where hundreds of thousands perished during the annexation of the republic of Kalinga in 261 BC. Rich, a well known environmental lawyer and author of an insightful study of the World Bank, Mortgaging the Earth, was stunned to learn that after the slaughter at Dhauli, Ashoka renounced the primacy of force and wealth as the currency of empire to embrace policies based on veneration, compassion and nonviolence. Rich suggests that re-examining the thinking behind Ashoka’s change of heart might allow our own generation to similarly reverse course.

Rich believes this is necessary because champions of globalization unnecessarily limit their horizons by assuming answers to questions of global policy can be determined through a calculation of their consequences. Consequentialism accepts a priori that data relevant to calculating results can be recognized before the event. Rich contends, however, that history demonstrates great social changes come as a complete surprise to decision makers because the data needed to predict them were not previously recognized. This was the painful admission of Alan Greenspan during his testimony about failing to anticipate the recent international economic collapse. In contemporary logic this type of error is explained through the Black Swan effect.

According to Rich, consequential ethics and their methodologies also prejudice their users into thinking global problems can be solved with institutional solutions. An institution is a social mechanism composed of rules that establish appropriate roles and mandate behavior necessary to achieve stated goals. Institutions get results through acting as both as coercive systems and transactional systems. In traditional international relations theory, realists endorse institutions relying on coercion while the self-styled idealists promote institutions based more on voluntary exchanges and negotiations. Realists support NATO-like alliances and policies such as Nuclear Deterrence. Idealists support agreements based on self-interest, treaties like the WTO and the Geneva Accords. But in the absence of justice, even International Relations idealists admit some degree of coercion is needed to secure compliance with negotiated transactions, prompting critics to claim much IR idealism is a kind of counterfeit realism, an iron fist in a velvet glove.

Rich points out that a parallel debate runs through the Mahabharata, one of the great classics of Indian culture. King Yudhishthira leads the brothers Pandava, the main protagonists of the epic tale. Their common wife, Draupadi, pleads with him to use the family’s superior power to break a treaty he negotiated with the rival Kaurava clan, “In this world a man never obtains virtue with law and gentleness, or patience or uprightness, or tenderness…power is the cause of everything…I bemoan powerless folk.” “Yudhishthira, [Rich writes], replies that he follows dharma [duty based on moral law] not over concern with its rewards but because ‘he who doubts dharma finds in nothing else a standard and ends up setting himself up as the standard.’”

Rich’s book is an extended discussion of how Ashoka struggled to adapt Yudhishthira’s position of privileging principle over power to rule an empire initially fashioned out of violence. Kautilya, chief advisor to Ashoka’s grandfather, Chandragupta, had written a celebrated defense of realism, the Arthasastra, in which he laid out with great brilliance the rationale through which the Mauryas had constructed and maintained their state. Kautilya inverted the traditional Hindu hierarchy of values, giving the greatest priority not to dharma, duty, but to artha, wealth. Rich cites the Arthsastra, as saying, “material wellbeing (artha) alone is supreme…for spiritual good (dharma) and sensual pleasures (kama) depend upon material wellbeing.” Ashoka’s rejection of realism after the Kalinga War, “attempted to transcend the Kautilyan view …through a new social ethic and politics of nonviolence and reverence for life.” How did he propose to do it?

Ashoka broke with Kautilya’s consequentialist position that the ends justifies the means by employing an ethical framework closer to what today is called de-ontological. He once again elevated dharma as the primary value of social life, but instead of deriving it from a cold, impersonal and rigid sense of duty, he rooted it in the Buddhist ideal of karuna — compassion both transcendent and immanent. Ashoka held that since human beings are connected in all aspects of their being with every element of life, their social ethics must encourage them to create communities that will, as Vaclav Havel put it, “expand simply as an environment in which we may all engage in a common quest for the general good.”

Ashoka’s belief that a dynamic field of spiritual energy lies at the core of all things committed him to honoring the search for truth as the basis of human life. Representatives of diverse religions, philosophies and sciences were invited to debate their views without fear of state persecution. Ashoka tried to create a secular version of the Buddhist Sangha through a vast educational program in which he drew from these diverse points of view to create his own dhamma or essential doctrine. The synthesis of all he had learned was inscribed on hundreds of pillars and symbolized through thousands of stupas raised throughout his enormous domain. He valued welfare over warfare and redemption over punishment, established universal healthcare for humans and animals alike, adopted an environmental policy reflecting the principles of deep ecology, and engaged in a foreign policy based on ahimsa. But ultimately the vast system of coercive institutions he inherited proved too resilient to transform. He died without having realized his dream of establishing a society in which all creation was regarded as sacred and treated as such.

Rich joins Octavio Paz in calling for a recommitment to Ashoka’s reverence for life as the keystone of our emerging global society, “We venerate the world around us and that veneration spreads to all things and living beings, to stones and trees and animals and humans.” Rich, quoting Paz, writes, “The ecological movement… insofar as it is a call to different social values, expresses our thirst for totality and our yearnings to participate.” Rich concludes his homage to Ashoka with these words: “The great Indian poet Tagore said, when the twentieth century was still young, that Ashoka’s ‘thought had been standing on the wayside for all these ages longing to find a refuge in the mind of every man.’ This moment may now be arriving.”