Behind the Scenes of Miyazaki’s Magic 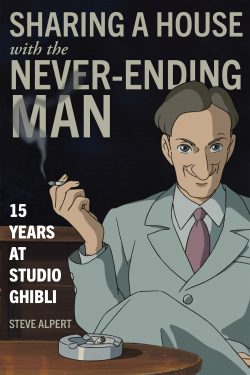 According to some, if you really love something you should never find out how it is made:  the object of your admiration might lose its shine, its magic. If I felt that way I would have abstained from reading Steve Alpert’s memoir about his time working with Hayao Miyazaki, one of Japan’s most famous movie directors (and the “never-ending man” of the memoir’s title). Spirited Away, one of Miyazaki’s most successful films, was my gateway drug to Ghibli’s animation which was in turn my gateway to Japanese culture as a whole, so disenchantment would be a high price for me to pay. Fortunately, though, I derive deep satisfaction from finding out how the things I love are made—it only adds to my experience. For anyone who is like me and who enjoys watching How It’s Made videos and behind the scenes documentaries, Sharing a House with the Never-Ending Man is a must.

Alpert was employed at Ghibli’s parent company Tokuma Shoten and was tasked with making its films as successful abroad as they are in Japan. His book concerns mainly the business side of the movie industry, rather than the creative side: a refreshing take, since most of these kinds of memoirs are overly focused on the elusive creative genius, ignoring the financial and political mechanics that are equally important in realizing a work of art. It hardly needs to be said that a lot of money is involved in the film world and therefore a lot of power, a combination that is always fascinating to read about. Sharing a House is filled with larger-than-life characters whose egos barely fit on the pages, whilst the author himself remains pleasantly down to earth.

As an American, Alpert was an outsider working in a Japanese company, but because he worked for a Japanese company he was, at the same time, similarly detached from his native US as well. He is simultaneously an expert and an outsider in both worlds and as such is a keen observer of their idiosyncrasies. For example, he alternates accounts of the difficulties of dubbing breakthrough hit Princess Mononoke for an American audience with his struggle to convince Miyazaki to attend the Oscars. He gives vent to his frustration about the strange Japanese custom of holding meetings only after a decision on the meeting’s topic has been decided, then expresses mild surprise at being on the receiving end of a Harvey Weinstein temper tantrum. Alpert’s adventures are often hilarious, but they are also indicative of the major problems plaguing the movie industry in both countries: sexism, prejudice and (above all) astounding vanity.

For all its merits, it is a shame that Sharing a House is so under-edited. The book feels rough and ragged around the edges. It is inconsistent, sometimes explaining too much and then too little, sometimes repetitive and at others jumping too far ahead. Tonally, too, Alpert at times overshoots the mark, like when he describes how much or how little actresses are wearing at the Oscars. It is obviously meant to be funny—and don’t get me wrong, Alpert is funny—but timing and pacing are everything in humor, and his are sometimes off. Similarly, the ending of the book is abrupt, failing to present a satisfying conclusion to the haphazard material and suggesting that the author has not adequately developed the through-line of his book. Alpert is a natural storyteller, but even the best storytellers (and especially memoirists) need to work hard to bridge the gap between themselves and their readers.

Its lack of polish does not make Alpert’s memoir unreadable—far from it—but it does make the difference between a biography that is good, such as this one, and one that is great. Reading a great memoir is like striking up a conversation with a fascinating stranger at a bar. Enraptured, you listen to their monologue, the stranger seemingly knowing exactly when to go into detail and when to paint events in broad strokes. You keep buying this raconteur beers in the hopes that he or she will continue and you are already imagining your triumphant return home when you will tell your partner “You’ll never guess who I ran into today.” And you feel lucky for having met this person and hearing their story, for it casts your life— albeit briefly—in the same frame as theirs and in doing so, tinges it with the slightest bit of magic.

Steve Alpert’s story does have magic, but it is intermittent and fleeting, evaporating all too soon.

Marlies Peeters is a graphic designer and frequent contributor to Kyoto Journal.