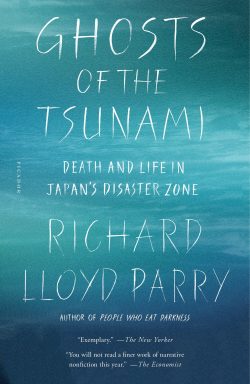 The facts of March 11 2011—the day Japan was hit by the biggest earthquake recorded in its history—are well known. As countless newspapers reported, the convulsion knocked the Earth six-and-a-half inches off its axis and moved Japan thirteen feet closer to America. Across the world, photos and video clips circulated of the terrifying tsunami waves that stretched over forty metres and surged up to ten kilometres inland, unleashing nuclear disaster at Fukushima. Over the coming days and weeks, televisions and computer screens flickered with images of a giant black wave hurtling cars over a seawall in Mikaho, a sightseeing ship washed atop a two-story high building in Otsuchi, and the flattened remains of the town of Ishinomaki—remnants that echoed uncomfortably an obliterated Nagasaki or Hiroshima some sixty-six years earlier. Over fifteen thousand people have been reported dead and over two thousand five hundred remain missing. The disaster cost an estimated two hundred and thirty-five billion dollars, destroying over one hundred and twenty thousand buildings and rendering unusable a further two hundred and seventy thousand.[1] The Japanese Prime Minister at the time, Naoto Kan declared “[i]n the sixty-five years after the end of World War II, this is…the most difficult crisis for Japan.”[2]

In Ghosts of the Tsunami, Richard Lloyd Parry confronts us with the startling human reality of this astonishing disaster. Parry’s chief concern is with the harrowing events that transpired at Okawa Elementary School in Ishinomaki, a heartbreaking drama that is notorious in Japan but perhaps less well-known internationally. At this school on the North-East coast of Japan, in the ten minutes or so between the initial earthquake and the ensuing tsunami, teachers evacuated pupils from the school buildings to the playground and several parents even arrived to pick up their children in their cars. Following this, exact details of particular incidents remain unclear and contested. It seems that the deputy headmaster, Toshiya Ishizaka, believed that the school directives required him to move students to a traffic island less than four hundred metres away, where the road met the New Kitakami Great Bridge. It appears that he was challenged by a senior teacher Junji Endo, who urged him instead to shift the children to a forested hill a five-minute climb away. When the tsunami struck, the ten teachers and seventy-four students who journeyed towards the traffic island were killed, but Endo and four children survived.

As Parry demonstrates, this pitiful incident is immensely revealing about the country in which it took place, and in particular the importance of the concept of gaman (a Zen Buddhist term which means “enduring the seemingly unbearable with patience and dignity”). A belief that relatives of the deceased would accept the situation without question led the Ishinomaki Municipal Government to attempt an incompetent cover-up. The pressure to disregard individual qualms and pursue the group interest compelled the participation of an inconsistent and clearly traumatized Endo, as well as the prevaricating headmaster, Teruyuki Kashina, who was absent from the school because he was attending the graduation ceremony of his own daughter several miles inland. Yet an analogous ethos of resilience and co-operation galvanized the efforts of bereaved families to take the Ishinomaki Education Board to court for its failure to protect the children and ultimately gain vindication with 1.43 billion yen in damages.

But Parry does not simply reflect on what Okawa can tell us about Japan, but provides a moving account of the tragedy’s legacy. He describes how the catastrophe tore apart communities—with those who lost children finding it impossible to talk to those whose children survived—observing, “[a] tsunami does to human connectedness the same thing that it does to roads, bridges and homes” (161). Parry communicates with sympathy and nuance the personal impact of the disaster with vivid character studies of interviewees such as Naomi Hiratsuka—who gained a license to drive earth-moving equipment so that she could search for the body of her dead daughter—and Reverend Taio Kaneda, a priest who established Café de Monku: a makeshift stall where the bereaved talk about their problems. Parry also has a poetic eye for the emotionally-resonant detail. He recounts Sayomi Shito’s father’s attempt to gather up the polished black funeral tablets from the household Buddhist altar as the earthquake hits. He notes Hitomi Kono suddenly hearing a tap dripping “at that ghostly moment in the advent of a tsunami when the water withdraws, exposing seabed and harbor-floor, before surging back in with full force” (29). He repeats Ryosuke Abe’s memory of “pine trees and the legs and arms of children sticking out from the mud and the rubbish” (38). At the same time, Parry does not shirk from facing the existential questions prompted by Okawa’s terrifying arbitrariness. A ninety-year old woman asking why her grandchild was washed away in front of her eyes induces Parry to reflect “[t]he true mystery of Okawa school was the one we all face…the fiery fact of death” (236). In this gripping but never prying book, the Okawa tragedy not only encapsulates the best and the worst in Japanese culture but presents a universal human drama.

Tokyo-based Alex Watson is a regular book reviewer for KJ.