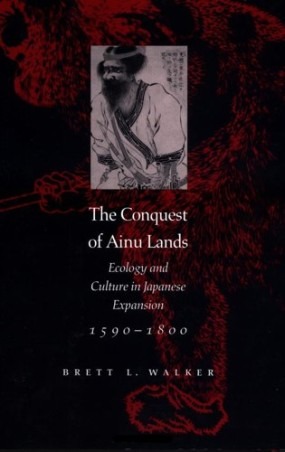 [T]he sheer lack of general information in English on the indigenous peoples of Hokkaido (formerly known as Ezo) and this book’s focus on two endangered intangible aspects of human survival – ecology and culture – attracted me. But this is no travelogue of pretty pictures and nifty rituals.

Seems the lack of information has a lot to do with who’s been in “control” of the study of the Ainu, including the process and vantage of the inquiry. It resembles the proliferation of politically-tinged reportage and tall-tale-telling that skewed the “truth” about the lives of Native Americans under the Westward “frontier” expansion of European-Americans in the late 19th century.

From the beginning the author attacks the popular and long-held Eurocentric notion that “Japan was a closed country.” “In the weary eyes of Ainu leaders such as Shakushain, who died in defense of his sacred land and a vanishing way of life among his people, neither the Edo shogunate nor domains acting under its authority appeared to be governments run by isolationists.” Walker continues, “An Ezo-centered approach illustrates that Japan was expanding in the Tokugawa years.”

Walker focuses his investigation on the “early modern symbolic economy and on the alliances forged on the ceremonial arena of gift giving and audience.” This includes concern about environmental degradation — the reduced populations of salmon, foxes and hawks in the woodlands due to over-hunting for purposes of trade. The result was economic hardship and famine for extensive populations. Further, it was disease – especially smallpox –”which cleared the way for the Japanese settlement of Hokkaido possibly more than any other factor.”

There are extensive descriptions about the development and network of the trading posts and related market-culture institutions, commodifyng what was otherwise considered sacred by the Ainu. This also impacted the basis of social hierarchy among the Ainu and “fostered among the Japanese a notion that the environment and its natural resources are most valued for purposes of exploitation leading to commercial growth.”

Ainu increased hunting activities to satisfy the need for trade goods rather than limiting it to meet the needs of the family and their holistic spiritual relationships with the kamuy (spirit). They traded animal skins and fish products for rice, tobacco, sake and other Japanese items, especially lacquerware and iron pots. Ainu social hierarchy shifted toward the mercantile.

An example is given, about the Ainu and the deer. “The Ainu hunted to eat and to fulfill their obligation as spiritual liberators. Following the kill, the hunter celebrated the kamuy-essence of the deer through ritual while at the same time repaying other debts to the owl who had made the hunt successful, and to the bear who had granted the hunter safe passage in the mountains.”

These reciprocal relationships must have in some way influenced the way the Ainu responded to the advances of the Japanese as well.

One wonders (and shudders in the process) what happens when the last Ainu hunter faces the last prey. Perhaps it can be found in the music of OKI, the most prominent performer on the tonkori, the traditional dulcimer-like stringed instrument of Sakhalin Island. On tour in the USA with the six-member Ma Rewrew during the Spring of 2004, their upopo (Ainu social songs), rimse (dances) and stories from diverse Ainu clans offered no plea for help. These polyrhythmic pieces spoke of a place so distant and yet so present and redefined the sense of sound and space in the theatre. They brought news of the last remaining Ainu peoples and OKI’s participation in the United Nation’s Working Group on Indigenous Populations.

Their final piece was an original OKI composition, “Let Us Understand One Another.” Perhaps the historians can learn it.