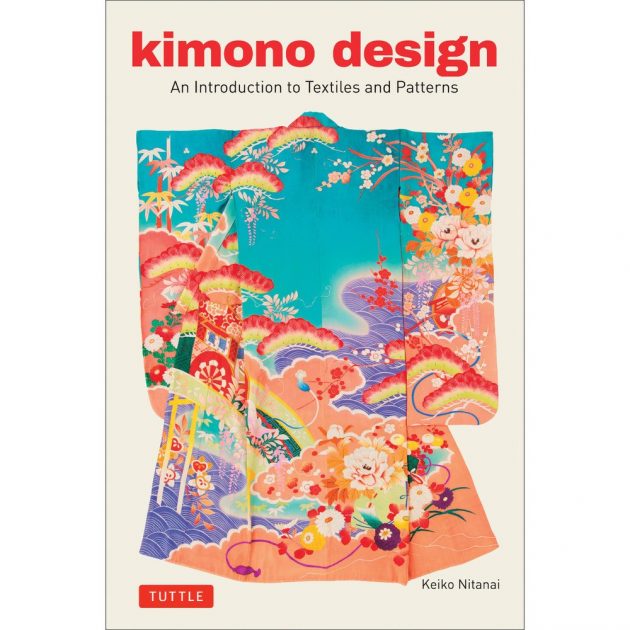 This is an extremely beautiful book. Every page explodes with color and pattern: exquisite embroidery, wonderful hand painting, complex dyeing, evocative renditions of natural motifs. An astonishing variety is presented. Classical Japanese designs alternate with less-well-known Western versions and pieces by artists of the present day, giving an eclectic feel.

Kimono Design is compiled by the founder and director of the Kyoto Antique Fabric Preservation Society, Keiko Nitanai. This group collects and exhibits a wide range of kimono and fabric, and also encourages participation by the younger generation by sponsoring design competitions. Several examples of winning designs are included in the photographs.

The arrangement of the designs is by season, so the reader can enjoy the parade of the botanical signals that are so important to the Japanese aesthetic. The history of various plants and flowers as they appear in art and literature are sometimes discussed in great detail, one notable example being the rose. There are also some interesting social vignettes, hints for interesting tourist destinations in Kyoto, and nostalgic essays which provide a welcome alternative to the visual focus. .

It was only after the dazzle died away somewhat that I began to notice some things that jarred a little. I myself am familiar with the various parts of a kimono costume, so I could visualize where the costume components shown would fit in, but someone who picked up this book expecting an introduction, as the title says, would quickly become confused. What does an obi (sash) look like when it is tied? Where and how does the pattern of the sash show up when it is actually being worn by a person? How do the obijime (sash cord) and obidome (sash cord decoration) look against an obi? How are obi and kimono combined traditionally and for maximum aesthetic effect? There are very few pictures of an entire kimono or obi, and none of persons wearing kimono costumes, thus the dynamic aspect of the designs is lost. Inclusion of these would have been very helpful.

Of course this book was originally intended for Japanese readers, who would probably not look at it unless they knew quite a bit about the subject already. It may be an “introduction” for such people, but foreigners could reasonably expect more explanation. As it is, the information provided leaves something to be desired in organization and degree of detail. For example, one caption begins, “In this dyed long-sleeved furisode kimono (see page 25) from the early Showa era (1926-88)…” The word furisode is explained on page 25, and every caption thereafter that mentions furisode directs us back to page 25. Indeed, all the Japanese technical words that appear in captions have these references back to the pages where the words were originally mentioned. This makes reading a bit clumsy, with the necessity to flip back and forth. Would not a glossary at the back of the book be more helpful to the reader? Second, the Showa imperial era was one of the longest in Japanese history. References to the Edo period in other captions are even more foggy, with a kimono or building described as being from a period close to 300 years long. More detailed pinpointing of dates, even to the nearest ten or twenty years, would be welcome.

The translation, by Leeyong Soo, is adequate, though a very few snippets of unnatural English have crept in (for example, “rings of water” instead of “ripples” or “whirlpools”). I think this would have been a very difficult book to translate. Rendering the flowing nuances of Japanese aesthetic description into relatively blunt English was certainly a challenge.

Finally, I will go out on a limb here and say that the whole book feels a little cluttered. A larger format with more empty space would better serve the subject matter.

Did I mistake this book for an actual introduction to kimono design and textiles? Kimono Design is rather a paean of praise to the beauties of kimono design, and as a book to pore over and marvel at, it succeeds admirably. If, once he has come down from his visual high, the reader wishes to expand his knowledge of Japanese textiles and designs both classical and modern, I would suggest supplementing this book with others in the genre that provide more technical information.