As part of their 70th-year anniversary celebrations, KJ has teamed up with Tuttle Publishing, the Asia specialist, for this four-part series. Tuttle presents us with a choice of their latest titles, and we select six per issue to send to our discerning reviewers. Follow us on social media and sign up to our newsletter to make sure you never miss the chance to enter our book giveaways! 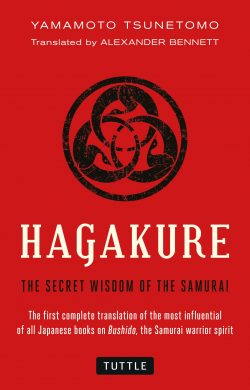 Hagakure, The Secret Wisdom of the Samurai

The Hagakure, originally a set of three books by the former retainer to a Kyushu daimyo, has been deeply influential for hundreds of years, as one of the most significant texts on Japanese samurai culture, and is said to have inspired Yukio Mishima. Although relatively unknown in the West, it has had a quiet impact on much of the world. Alexander Bennett’s new translation brings the Hagakure to a new modern audience, and is already lauded as the definitive version in English. Both clear and easily accessible, it is the most complete English version of the books to date, and provides ample context and explanations throughout. Key events, and unusual terminology are clarified in footnotes, and complex hierarchies are depicted in diagrams. Bennett’s excellent translation and depth of historical knowledge (he earned doctorates from both Kyoto University and the University of Canterbury, in Japanese history and literature) make this book a pleasure to read. Anyone with even a passing interest in bushido would find something to take away from this enlightening new edition. 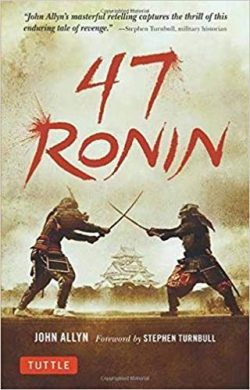 This real-life eighteenth-century drama, in which 47 selflessly devoted samurai avenge the mistreatment of their lord, wilfully risking their own lives for the sake of honour, is a tale of immense historical and cultural importance. John Allyn (who was stationed in Japan during the U.S. occupation and later specialised in Japanese theatre) retells their saga with delicate attention to detail, excelling at describing characters rich in personality and nuance, and the instinctive human moments—a strained sigh or a glance of reassurance—which create the social complexity necessary for a story so focused on respect. Historical details provide context for the pivotal events whilst never interrupting the narrative flow. Stephen Turnbull’s foreword highlights where literary adaptations have altered historical facts, allowing for a fascinating double-reading of the tale in which these alterations illuminate the importance of devotion as an essential part of traditional Japanese culture. A vital piece of the literary canon, Allyn’s accessibly written version of 47 Rōnin is a great entry into classic Japanese literature. 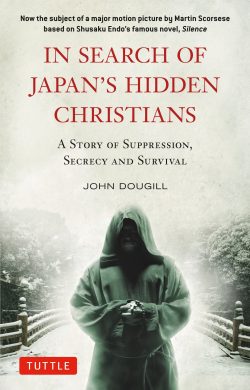 In Search of Japan’s Hidden Christians: A Story of Suppression, Secrecy and Survival

In 1549, the priest Francis Xavier (co-founder of the Jesuits, proposer of the Goa Inquisition; later patron saint of missionaries) left India to introduce Catholicism to Japan. Despite initially mis-identifying Deus as the Buddhist deity Dainichi, his campaign achieved steady success in western Japan, tolerated by warring daimyos who devoutly desired access to Portuguese firepower. Converts eventually numbered up to 100,000, but in the Tokugawa era they were increasingly depicted as a threat to law and order. In 1638, 37,000 rebels were slaughtered during the Christian-led Shimabara uprising. In the following year, all Europeans were expelled except the Dutch, and horrendous suppression sent surviving Japanese devotees into hiding, mostly on remote offshore islands. Unbelievably, 200 years later, after Japan’s Meiji re-opening, up to 60,000 “Hidden Christians” still existed, bearers of a secret oral tradition transmitted through seven generations. Join author John Dougill on his illuminating road-trip exploring all the important sites in this impressively well-researched chronicle of remarkable devotion. 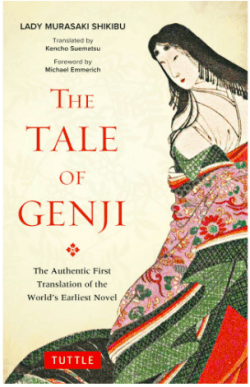 The Tale of Genji

Widely regarded as the world’s first novel, The Tale of Genji by Lady Marasaki Shikibu is a classic text with unparalleled influence on Japanese literature. The story follows Prince Genji, the son of the Emperor, as he traverses the complex social landscape of the 11th-century Heian court. The handsome young nobleman, removed from the line of succession for political reasons, is an accomplished artist, poet, dancer and musician, but most importantly a passionate courtier. Woven into the accounts of Genji’s romantic exploits, a rich image of Japanese aristocracy is produced and the importance of artistic endeavour in that society reveals itself. Diplomat-scholar Kenchō Suematsu’s 1882 translation covers the first seventeen chapters of the 54-chapter tale. In both its brevity and precise, Victorian style of prose, this translation is exceptional. This makes it an unusual but rewarding introduction to the text for a first-time reader, or a compelling alternative for those already familiar with more common translations. 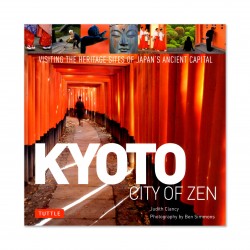 With perfect balance between stunning photography and concise descriptions, KYOTO: City of Zen is a wonderful overview of the most important sites of Japan’s ancient capital. It is a book that could only come out of a city as long-standing and storied as Kyoto, with each region dotted with enough temples and shrines to fill ten books of this size. Judith Clancy, who has lived over 40 years in Kyoto, is excellent at providing detail on each of the sites, be it some feature of the architecture or aspect of the history, without losing her storytellers instinct and the sense of exploration created by the images. The photographs, by Ben Simmons, are spectacularly varied in their composition and colour palate. Each temple, shrine or villa claims a coherent and different visual style, illuminating the diversity of Kyoto’s heritage sites. It would be difficult to open this book and not feel an insatiable itch to visit, or further explore, the city of Kyoto. 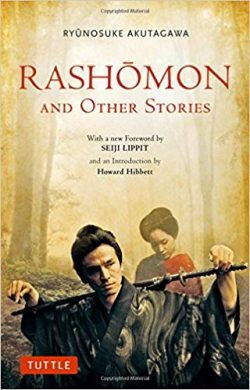 Rashomon and Other Stories

This reissue of Kojima Takashi’s Occupation-era translation of six of Akutagawa’s “finest and most representative writings” focuses on the modernist stylist’s historical fiction. The early stories, “Rashomon” (1914), “Yam Gruel” (1916), “Kesa and Morito”(1918), “The Dragon”(1919), and “The Martyr” (1918),  with their themes of confession and the unknowability of human motives,  set the stage for “In the Grove” (1922), the story on which Kurosawa’s 1950 film, Rashomon, is based. As Seiji M. Lippitt notes in his Foreword to this edition, the original tale, which unlike the film, lacks a framing device, is a pure example of what has come to be called the “Rashomon effect.” All that remains of the original Rashomon, the massive gate at the city’s  southern approach, is  a simple stone marker in a nondescript playground northwest of Kyoto Station, near the Tanbaguchi Wholesale Market.