[R]epeat visitors to Seoul always comment on the many changes they encounter. Offices move, phone numbers change, favorite restaurants disappear — out with the old, in with the new. Living in a Korea at various intervals since the 1980s, Drayton Hamilton captured the torrent of change in stark reality and sharp detail (see KJ 60, Korea). The two decades coincide with the sweeping changes that moved Korea from dictatorship to democracy, from Third-World industrialization to high-tech de-industrialization. The “Korean Dream” of getting rich materialized in the street, giving birth to new anxieties — greed, stress, alienation, and the search for spiritual enrichment — that bedevil other advanced nations. The Korean Dream emerged from the forced industrialization of Korea that began in the 1960s under strongman Park Chong-hee (president from 1961-1979).

The book is divided into four broad thematic sections: Faith, Work, Polity, and People. The pictures in the Faith section reveal the deep spirituality in Korea that echoes against the material success of the Korean Dream. A picture of a gray-haired woman, megaphone in hand, preaching in front of a McDonald’s in downtown Seoul in 1999 crystallizes this tension, while pictures of a faith healer in Gyeonggi Province in 1994 reveal the intensity of belief in Korean religious practice.

The Work section is darker in tone because it lays bare the pain that coal miners, fishermen, and factory workers, among others, bore in the rush to build the Korean Dream. For all the pain, however, many of the people in the photographs show expressions of warmth that reveal the deep-seated optimism in Korea. The captivating yin-yang-like dichotomy of hardscrabble and optimism among those who work with their hands runs through many photographs in the book. The photographs in the Polity section deal with the primary macro issue in Korea in the 1980s and 1990s: democracy. In the mid-1980s, only the National Assembly was elected, but by the 2000s, successful presidential and local elections had become regular events. Photographs of student activities and worker unrest tell the story of democratization. Students defined a good country as a democracy and banded together to fight for the nation they wanted; workers knew that the country couldn’t survive without them, and banded together for the workplace they wanted. People power won the day.

Finally, the photographs in the People section, the longest section of the book, show how optimism turns to mirth in many everyday encounters in Korea. The photograph of the drycleaner and his wife and friend hugging each other and jumping for joy when they heard of the birth of Drayton’s son David in 1994 is the ultimate people picture in the book (left). Koreans enjoy people, as they are, faults on display. Spending time with ordinary Koreans reveals the essential fact of human existence: in the end, people, not things, are what count. 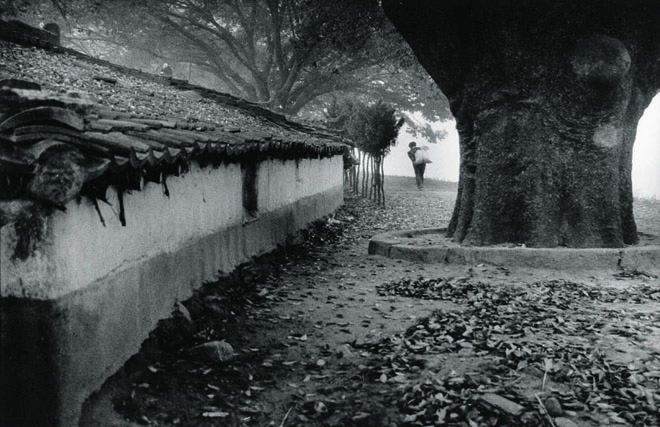 In 1999, Hamilton travelled to the ethnic Korean community in Yanbian China and a few of those photographs are included in the collection. The pho-tographs show the Korean community as it was before extensive contact with South Korea and economic growth in China brought dramatic change.

The book contains explanatory essays in English and Korean by Hamilton and an epilogue by Rob Wilson. The essays help frame the photographs in time and place. Kwon Heejong did masterful translations from English into Korean.

Epilogue
Drayton Hamilton’s wife, Haeseung Park Hamilton, died of cancer on March 15, 2009 shortly before this review was going to press. I had the pleasure of knowing Ms. Hamilton when I taught with Drayton at Korea University in the early 1990s. She had grace, majesty, and strong character. She arranged Drayton’s photographic expeditions and joined him on many. Her loving assistance made these photographs possible, and her spirit lives on in the pages of this book. We are forever thankful.