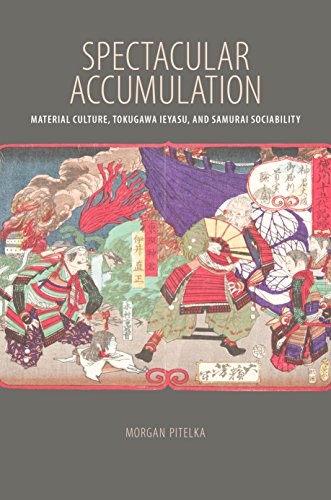 Spectacular Accumulation: Material Culture, Tokugawa Ieyasu, and Samurai Sociability is, like a thought-filled offering, at the same time scholarly and accessible.

In this fascinating analysis of ego-satisfaction among the leading influencers during the latter Sengoku Period, Pitelka, a professor of History and Asian Studies and the chair of the Department of Asian Studies at the University of North Carolina, focuses on their proclivities of gift giving and receiving, idiosyncratic hobbies and other areas of doing business among the shogunal lineages of  Oda, Toyotomi and Tokugawa. Author of numerous books, including Japanese Tea Culture: Art, History and Practice (reviewed in KJ 71, 2009), he once again demonstrates his keen ability to craft scholarly, but engaging stories out of fragments of letters, memos, contemporary reportage, and other material objects. His examples range from falcons and ceramic tea utensils to the heads of their adversaries and tombs.

Over time countless ephemera have been carefully preserved and conserved not only by progeny who are next in line to maintain their bloodlines through force, but also by household agencies and estates  that morphed into museums supported by industrial corporations. Pitelka challenges Japan’s prevailing  nationalistic narratives of high cultural and artistic achievements based upon the near deification of the elite action heroes of Japan’s bloody 16th and early 17th century.

But at what cost? “The illusion that we are encountering a natural sample of the lived experience [italics mine] of human actors who are otherwise distant from us in time and space is both one of the greatest strengths and greatest dangers of the museum,” the author reminds us. The “us” in both cases beg a more populist view of humanity in Japan and beyond.

Pitelka delves deeply into how, at the highest socio-economic and military ranks, the “accumulation of political power and the accumulation of treasures are inextricably linked by acts of violence and define our understanding of sociability.” Despite the massive and traumatic loss of life in the “Warring States” period, current popular retelling of these histories emphasize heroic battles; the glory that trumps the gore.

Like today’s competitive video games, where advantage can be leverage by luck and savvy exchanges of tokens, the tools of warfare didn’t always inflict bloody wounds.  He describes Oda Nobunaga as being “Armed [italics mine] with a small but extraordinary collection of famous objects, as well as with substantiated connections to some of the tea luminaries of Sakai ….” Yet, there was a dearth of venerable ritual tea utensils worthy of presentation at fashionable formal tea gatherings among military, merchant and monastic elites. Toyotomi Hideyoshi’s solution: invade the Korean peninsula to bring back not only maksabal (quotidian rice and soup bowls in high demand as chawan (tea bowls), but to enslave tens of thousands of Korean potters (and skilled crafts people working in iron and silk) to create them in Japan. This also fostered the development of Japan’s now hallowed domestic ceramic styles, including Hagi and Karatsu. In the midst of this hunger for tea toys, craft industries and supply networks emerged, some continuing through 16 generations to this day. (See The Sword and the Scoop: Merchandising The Way of Tea In Changing Times and Senke Jisshoku: 10 Craft Families of Three Sen Lineage Holders originally published in KJ 89.)

Tangible objects made of earth and other materials have a way of enduring over time; such objects provide scholars and heirs with concrete ways to infer and imply power; their durability confounds and conflates the notion of what is “important.” A case in point is the veneration of the Tsutsuizutsu oido chawan. Fashioned by an anonymous potter, this humble maksabal it found its way to the sanctuary altar of renowned Zen Buddhist priest Murata Juko who used it for food offerings. It was coveted and  appropriated by Hideyoshi as a favorite bowl for making matcha for his pals. Yale University Library even credits Hideyoshi as the “creator” of this national treasure Chutzpah? On whose part?

As Pitelka reports, these same fellows also loved to hunt with falcons, whether at home or out on the warpath; falcons, as well as horses, were prized gifts frequently exchanged among the noble warriors, along with gold. “The falcon’s graceful pursuit of prey served as an idealized substitution for the messy reality of war…,” offers the author. It’s “a kind of theatrical restaging of the potentially fatal work that defined warrior identity.” Once out of vogue, falconry became a defining element in appraising real estate claims; while the sky’s the limit; the ground’s boundaries became fixed. How do we know? While the Japanese didn’t actively practice taxidermy, leather, textile and other equipage survive, as well as paintings and other ephemera from which one can construct compelling tales of bravado.

Pitelka examines Tokugawa Ieyasu’s practice of  “… two parallel and related acts: taking heads and collecting swords.” Pitelka challenges the crafting of Japan’s most fundamental historical narratives that glorify acts of bravery “… over the reality of the slaughter of human bodies…” More than 450,000 samurai were engaged in the horrific Battle of Sekigahara and the sieges of Osaka Castle in service to the Tokugawa hegemony. Pitelka calls war a “semiritualized act, an inherently social process bounded by culture rather than a dramatic encounter between heroic individuals.” At Sekigahara, his samurai slaughtered the ranks and decapitated high-ranking adversaries. Ieyasu encouraged them to clean and present the heads for his ceremonial inspection. It was considered an “… embarrassment to take the head but ignore or discard the helmet!” Sometimes the heads were displayed in public. Not only did it prove that the enemies were vanquished, it fueled a warrior’s “performance review” for promotion,  Pitelka notes. The victories notwithstanding, it was a traumatic, massive loss of life. (Exactly how did that fantastic suit of armor and helmet get to the local museum… ?)

Ieyasu had rescued and in some cases repaired highly-prized ceramic tea containers and swords that were damaged in battles of Osaka Castle. The sale of some of those renown tea utensils helped pay off the enormous cost of his military activities. In fact, releasing Hideyoshi’s coveted tea utensils into the “open” market enabled the Tokugawa government to recast chanoyu as a patriotic Japanese practice, essential to the formal etiquette of high society. Also, a burgeoning demand for domestic utensils grew up; precious objects with glorified provenance were sold at inflated prices. Likewise, as Pitelka highlights, “… the reclamation and reforging [of the captured collection of historic swords] represented a concerted effort not just to defeat the Toyotomi but to literally accumulate and own the treasured weapons of their now vanquished foe.” Beautiful objects to be sure, but beauty reforged in service to propaganda.

“I think that it’s dangerous to misremember war and the people who led and fought wars. One of many reasons why that’s dangerous is because the specter of Japan rearming and the many possibilities that would be opened up by that political change to me, as someone who is pretty much a pacifist, are disturbing,” the author reflects.

Pitelka’s final chapter considers these warrior’s “early modern afterlives” and how the sites of their earthly apotheosis have been promoted as worthy of veneration by Japanese as well as foreign visitors. He points to UNESCO’s World Heritage Committee recognizing the Tokugawa funerial complex in Nikko as a sited defining Japanese culture, its beautiful architecture aside. The deification of the spirits of blood-thirsty egomaniacs have morphed into national rituals and festivals; the locations have become must-see tourist attractions for visitors from abroad. Pitelka mentions that even in the narratives of popular modern video games, this history of violently-wielded power has inspired a new generation to become interested in Japanese history.

In Spectacular Accumulation Pitelka states his case for the need to shift attention away from swashbuckling elites and urges his colleagues in and out of Japan to find more value in the histories of common people and their quotidian lives. His current project is in collaboration with archeologists unearthing the remains of Ichijodani, a formerly thriving rural agricultural community of 10,000 near Fukui that in the 16th century was the capital of Echizen but is now vanished. During  a 2020 Michigan Talks Japan podcast, Pitelka further reflected,  “I think it’s politically dangerous in this historical moment, more than any, perhaps for us to be sanitizing the past. But any country that can somehow finagle a situation where they don’t have to be constantly teased by the opportunity to wage war, that seems to me like a good deal.”

[i] Headline of a mid-20th century advertisement for Blackglama mink coats in the U.S.

Lauren W. Deutsch is a contributing editor, KJ board member, and a prolific contributor to KJ. Based in L.A., she is also a long-time student and licensed instructor (Sōchi) of the Urasenke School of Tea.