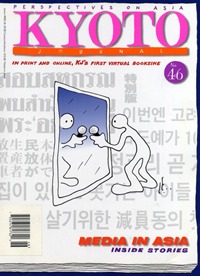 From KJ 46: Media in Asia
[M]edia – from “mediate,” meaning “to come between” (not so much as peacemaker, usually, but obstruction). To sift, condense and simplify: to take what is an ache, a cry of love, a prayer and turn it into gossip, soundbyte, argument. New media, old media, it’s all the same: a screening of the world, in every sense, which allows us to throw up new images on the walls of our cave, as we keep our backs ever more rigidly turned to the world outside.

I’ve made my living in the media for almost 20 years now, and I trust it not at all – not because it’s any more corrupt or mindless or driven by hidden agendas than the rest of us but only because it is human, and lacks the time and space and means to do justice to what it knows. And in its fear and limitation it defines truth as facts or documents. The media in Asia is seriously chattering, dull, insanely democratic and relentlessly authoritarian, but at heart it involves the same reduction as the media anywhere: a translation of the human into something else and less.

I do not mean to suggest that the media is the cause of many of our problems: if it is toothless silly or distorting, often, that is mostly because it’s in the business of giving us consumers what we want. As the National Writing Association (if such a body existed) might say, “Images don’t kill people. People do.” Our impulse, often, is to blame our messengers for our own ignorance or laziness or blind adherence to our dogmas. Yet the media can only be as strong as the power that we cede to it.

And this is where I begin to find my hope. At any point, at every point, there’s room for conscientious objection — a private, silent revolution whereby we can take responsibility and power back into our own hands. The media is ever more with us as the years accelerate — a rumor of Rwanda’s coming through on TV, the cell-phone; the fax is beeping with reports of East Timor; the website offers a beautifully packaged, boxed and easy-to-read synopsis of 2000 years of Chinese history. We have ever more information at our disposal (we in the privileged world, that is) and ever less sense of how to use it. The data comes in on us in floods from every corner at every moment and yet something in us, surely, begins to sense that the only things that matter are the things that don’t show up on-screen. The cry, the love, the faith – everything, as Bono radiantly sings on the last U2 album, that has, in the highest sense, “to be believed to be seen.”

And all the while our noses, ears and hearts are hungry to pickup news, transmit it, taste it, see what lies behind it. The media will never be better than the mass of our public needs, but we, at any moment, have the capacity to unplug the blinking machines, throw away the newspapers, and go out into a world ever more mobile and accessible to see what’s really happening in Jerusalem and Phnom Penh and just outside our neighbour’s window. Leave your laptop and your second-hand arguments and series at home and go out in search of questions. Go to a village in Burma and ask the man who invites you into his home, his life, “What do you really need from us? How can we help?” Take yourself to Cambodia, and listen to the sweet young girl say, “The Khmer Rouge saved my life. With out then I wouldn’t be here”. Walk into the hills around Kyoto, and ask how much all you’ve heard about Japan – Prime Minister Mori and DoCoMo phones, the recession, the platform heels, the otaku and the bureaucratic paralysis – really has to do with what’s important.

The media will always be more than ready to give us the world – its world – in a nutshell. But the world itself always be wiser than its explanations, and even as the media grows stronger, so too does our capacity to move, and to communicate with that pilgrim near Lhasa. Those of us with the resources to do so can take ourselves to those without, and give us all a world unmediated.

“Tell me your story,” we ask the woman in Pasay City, or the man outside our door. “I know how it feels.”