Japanese Tea Houses Outside of Japan

Japanese tea culture continues to captivates the world and there are more venues in the Western world offering a high quality Japanese tea experience, and even classes in cha-no-yu (tea ceremony, of which the Urasenke School is the largest). Here is a selection of both such establishments to plan a visit to when the pandemic is over, some of which are offering tasty take-out options in the meantime. 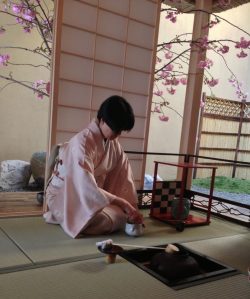 NYC Washitsu is an amalgam of traditional Japanese spaces located in the bustling heart of Manhattan. Created by the Globus brothers (Ron, Ric, and Stephen) in 2012, Washitsu was founded to facilitate cultural dialogue between Japan and New York.

Despite its urban location, Washitsu’s interior is wide and spacious, designed with the “less is more” philosophy in mind. The space is divided into two: Washitsu, which translates to Japanese-style room (和室),  and Chashitsu (茶室) meaning tea room. The former is composed of two adjoining tatami rooms that serve as venues for events or ryokan guest houses for traveling artists. Chashitsu is true to its name, a space housing the venue’s tea house, KeiSui-An (憩翠庵). Tea lessons are conducted by visiting Japanese tea experts, which Washitsu refers to as “Masters in Residence.” Numerous events are held in Washitsu and Chashitsu year round, ranging from Japanese ikebana (生花) flower arrangements to tatami recitals showcasing the shamisen, koto, and other traditional Japanese instruments.

✨第73回全国茶品評会 農林水産大臣賞受賞茶 一等一席 ✨ The best of the best gyokuro Share this with someone special A taste An experience You will not forget Available at the tea bar only, on normal opening days or casual Sundays.

CHA-OLOGY’s name is a compound of the Japanese word for tea, cha (茶), and the Latin root -ology meaning “study of.” Reflective of its bilingual name, the teahouse is dedicated to providing an immersive, Japanese tea experience to England.

CHA-OLOGY keeps the spirit of traditional Japanese tea ceremonies alive amidst the busy streets of England. The space discourages excessive chatting and photos to enhance one’s senses and maintain a serene atmosphere. Each cup of tea is hand prepared before customers and joined by homemade sweets. The sweets menu changes with the turn of the seasons, consisting of various types of mochi and daifuku. Workshops are held regularly—ranging from hands on houjicha (ほうじ茶) green tea roasting to wagashi making. Through CHA-OLOGY visitors will receive an eye-opening experience to the delicate nuances of the art of Japanese tea.

Behind the Museum Cafe Portland, Oregon

We are serving some sweets for all of our customers who order a drink, pick up or to go. Thank you for coming and we thank you for continuing to support us during these difficult times. We’re open 11am to 3pm daily #thankyou #matchalatte #hojichalatte #behindthemuseumcafe

Attached to the Portland Art Museum is the appropriately named Behind the Museum Cafe. Specializing in Japanese foods, the cafe serves a wide array of teas and sweets that take a modern twist on traditional Japanese flavors.

Inspired by the Portland Japanese Garden, owner Tomoe Horibuchi opened the Behind the Museum Cafe in the hopes of sharing his culinary experience with others. A cook of the vegetarian Buddhist cuisine shojin ryori (精進料理) and experienced in practicing Japanese tea ceremony, Horibushi combined his two experiences to create warm, homemade dishes for all.

The cafe offers traditional Japanese teas such as sencha (煎茶) and desserts such as zenzai (善哉), a sweet azuki bean soup with mochi. Modern takes on these traditional flavors include matcha brownies and wasabi popcorn.

Katsute 100 is a Japanese tea room in London, England. Katsute (嘗て) means “once,” and conveys feelings of nostalgia and history. The tea room lives up to its name, allowing tea and sweets to transport its customers into a unique pocket of time.

Like its Manchester counterpart, Katsute 100 aims to create an oasis of serenity amidst the distractions of a bustling city. To do so, Katsute sources its tea directly from Japan. Apart from the standard selection of matcha and green teas, Katsute carries unique infusions such as sakuracha (桜茶), a tea made from pickled sakura blossoms. Their homemade desserts selection is equally unique, combining traditional Japanese and English flavors in confections like matcha crepe cakes and yuzu scones. With these authentic creations, Katsute creates a beautiful meeting point between the cultures of Japan and England. 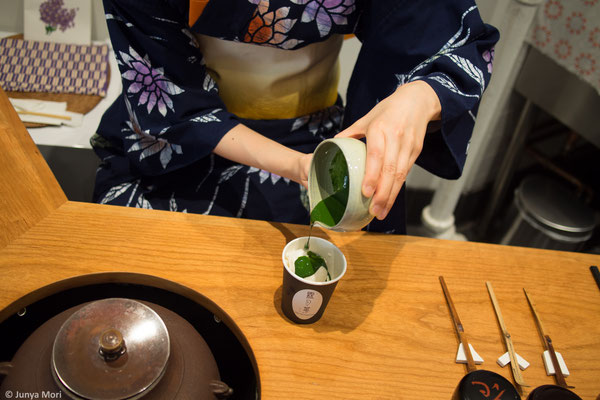 Setsugekka (雪月花) is composed of three kanji characters, meaning snow, moon, and flower respectively. The three elements represent each of the seasons. The fourth? You must visit to find out.

This New York tea house provides a plethora of matcha beverages, from lattes to affogatos, with the ingredients sourced from Japan. A rare item on their menu is the high-grade koicha (濃茶), which is matcha four times thicker than what one would normally drink during a tea ceremony. A part of chakai (茶会), formal tea ceremony, koicha is a deep forest green color.

Setsugekka’s shining feature is its unique interactions with customers. The tea house provides regular hands-on experiences for those who wish to learn more about the art of tea. Open tea ceremonies are conducted monthly, and trial lessons await those curious to learn the details themselves. Lessons on matcha making also happen each month, in which an expert breaks down the complicated art. By providing a window for customers into the world of Japanese tea, Setsugekka provides a unique, immersive experience.