Memory and Empathy in a Japanese School Lunch

March 11, 2019 marked the eight-year anniversary of the Great East Japan Earthquake and tsunami in Japan which left communities destroyed, a disastrous nuclear meltdown in Fukushima, and approximately 20,000 dead or missing. After nearly a decade the trauma of that day and its aftermath has quieted into solemn acceptance. Recovery continues and new generations are born with no immediate experience of the disaster. With each passing year it may seem that the events of that day fade from public concern. However, memory remains kindled in an unlikely place: the school lunch tray. This March 11th, as in recent years, schools throughout the country honored lives lost and a region destroyed through special meals which acknowledge loss and endeavor to strengthen community. The meals are a unique ritual for students to explore insecurity and encourage empathy.

Every lunch is different. In Nishio City, instead of meals served on reusable trays and plates inside their classroom, this year students eat from plastic bags outdoors during brisk March noontime. This school honors the day through disaster preparedness exercises. Middle school students spend their lunchtime working in groups of four—a size designated because of its similarity to a small family—to practice transporting and serving meals as a unit. One student remarked, “I realized just what kind of food you eat when there’s a disaster,” while others expressed a renewed sense of appreciation for their regular meals eaten in the comfort of home. Meanwhile, a school in Kagawa Prefecture served nutritious, easy-to-prepare meals using ingredients with long shelf-lives, such as canned beans, noodles, and rice. In a country prone to natural disasters, including a series of devastating floods last year, these exercises and the situations they emulate may not be far-fetched for the average Japanese citizen. These practices allow students to explore tragedy and loss through familiar daily routine. 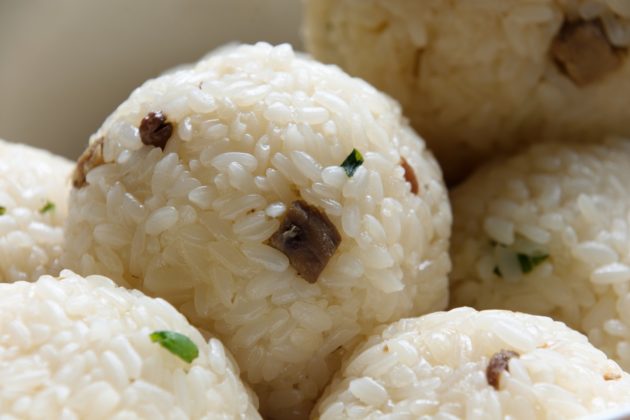 Lunches also serve as a conduit for healing and support. Recovery remains slow and nuclear stigmas continue to tarnish the agriculture and fishing industry in Tohoku. One way for outside communities to show support is through encouraging the Tohoku economy. In Sagamihara City, near Yokohama, the past five March 11ths have seen twenty-seven junior high schools support Tohoku through lunch. The “Recovery Support! Good luck Tohoku!” lunches include regional ingredients such as sea urchin from Sanriku, yellowtail tuna from Ofunato, and apples from Aomori , all part of the Tohoku region. At other schools, schools serve rice balls or request students bring them from home. Traditionally made by hand, rice balls have a special place in Japanese culture. They are full of nostalgia and comfort, and, as cookbook author Elizabeth Andoh notes, a form of “culinary bonding,” often prepared in groups for events ranging from festivals to disaster relief. Since 2015 South Ichinomaki Elementary School honors the day with a rice ball lunch in the hopes that students will be reminded of their supporters, and inspire students to think of what they can do to help others. Meanwhile, other schools complement lunchtime activities by including relevant curriculum on this day. At a Sagamihara junior high school, first year students who would have been approximately five or six years old at the time of the disaster learned about earthquakes in science classes, discussing March 11th in particular. By connecting the meals with classroom studies, schools create a safe and interdisciplinary teaching environment to discuss a traumatic event. The lunches collectively acknowledge that March 11th is no ordinary day. 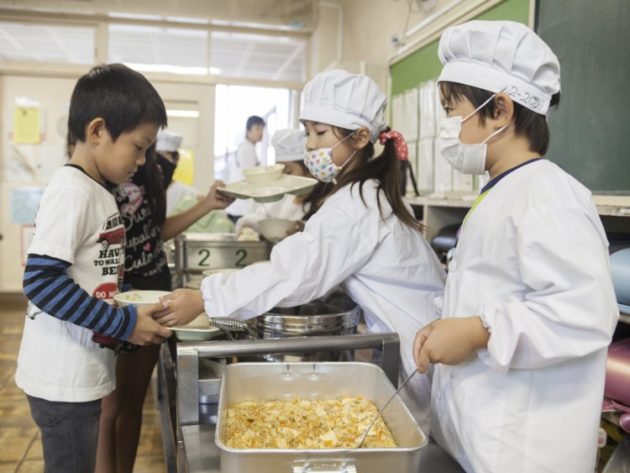 These kinds of activities are thanks in part to the 2005 Food Education Law. This law allocated a budget from which schools and communities could draw. The State now supports food education as part of the curriculum. Educators can approach food creation and consumption within a broader context of society and culture – work they do with care. One nutritionist from Minami-Soma, a region partially destroyed by the tsunami, explained food education as learning how to “live well” and that “No matter what happens to you, through school lunch you can learn how to take care of yourself and your health.” Many in the food education sector share this feeling, seeing their work as contributing to the lifelong development of a child. What they offer is building collective memory of something deeper – care for others and the world around them. The connection they seek to create is no clearer than through the meals served on March 11th.

These lunches might be disregarded as a quaint cultural tradition—something uniquely Japanese. Yet food is part of everyone’s story. Everyone has food memory—from grandma’s home cooking to cafeteria school food. What some in Japan have chosen to do is help children to engage with their surroundings through something tactile and tangible – the lunch tray. These students may not know it now, but March 11th Meals will become the stuff of memory and perhaps something that as adults they will cherish. I like to think that they will remember empathy for their fellow man and the capricious nature of life.

Alexis Agliano Sanborn is an independent researcher and documentary filmmaker whose work focuses on school lunches and food education in Japan and around the world.