[A]fter World War II and the conclusion of the Chinese communist revolution, Taiwan experienced a baby boom similar to that of the US, though the boomers in Taiwan started to rebel about twenty years after their American counterparts.

Taiwan had been occupied by the Japanese for nearly fifty years before the war, and after the war and losing control of mainland China, the leader of the Nationalist Party (KMT), Chiang Kai Shek, fled to Taiwan. Along with the Nationalist Party leadership, thousands of young men from all over China came flooding into Taiwan and settled in. This turned Taiwan into a big melting pot that started cooking together all the regional elements of China in the small confines of the beautiful island.

Since the US government was supporting Chiang Kai Shek and the KMT, there was also a heavy American influence at that time in Taiwan. When the Vietnam War got underway, the influence of American money and military personnel grew stronger, and Taiwanese baby boomers became familiar with yet another cultural input. Although the martial law of the time was strict and Western music and dancing were heavily frowned upon, we all started secretly listening to the new kinds of music from such groups as the Carpenters, the Beatles, and Abba.

The environment during the 1970s was very special. Though Taiwan was still a poor country with an authoritarian government, it was also a culturally diverse country with a hard-working population. It was a fantastic mix of Japanese influence from the first half of the twentieth century, the wonderful range of regional dishes from China available through street vendors or neighbors, and the beginnings of exposure to music and entertainment from the West. We were struggling to discover who we were. And since there were so many of us, we decided that we might as well we create our own identity. Students all over were trying to change the strict rules for hair length and ugly uniforms. People were protesting to gain more freedom of speech; we were all trying to break the rules and find the meaning of our own mixed roots. 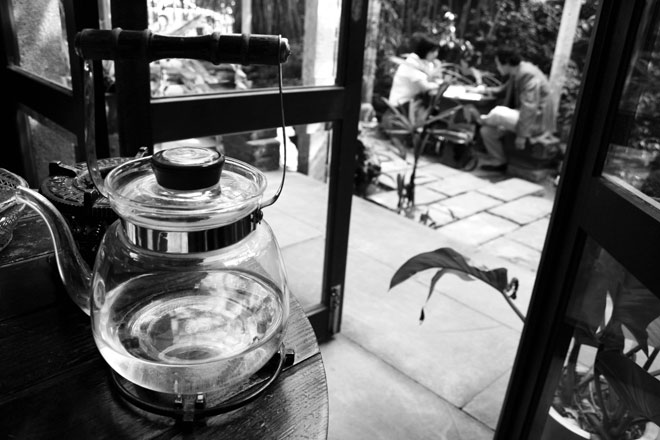 In the 1980s, Taiwan was still under martial law in response to threats from mainland China. However, there were no rules at that time if you did not touch on political issues, especially if you claimed you were looking for traditional values or cultural foundations. So it seemed acceptable, for instance, for a guy to renovate his dad’s dormitory even if that old Japanese house had been assigned to him for residential use by the government. Thus began the teahouse called Wisteria. Before Wisteria, tea was just a beverage item; people went to teahouses to hear live traditional music and eat food, which is more like a Cantonese dim sum restaurant. The old shops also had peanut shells and watermelon seeds on the floor. Some of them even became bawdy houses of ill repute and severely damaged the tea image.

Wisteria was the first intellectual style teahouse, and created a quiet, clean place to focus on drinking tea. Outside the wood and paper walls of the two-story Japanese house was a garden with bamboo and a koi pond. In the middle of the bustling city of Taipei, this leafy-green space provided a soothing refuge, and passing through the banyan tree and over the stone pathways into the house set a tranquil mood even before entering. Once inside and sitting comfortably upstairs on the tatami floors with your selected tea, you began to enjoy the company of friends while waiting for the water to boil using a classic alcohol burner. Once the water finally boiled, the tea could be prepared using handmade cups, bowls, and pots of mixed styles. Occasionally, some monastery-style food was available to complement this simple tea-¬having ritual.

Since Wisteria was a success, it was no surprise that Japanese design started showing up everywhere in ¬Taiwanese teahouses in the 80s. The paper walls, the wooden beams, and the tatami floors all added to the rustic and comfortable feeling of these teahouses. The green of trees and plants outside the windows helped make these places into quiet refuges from booming Taipei.

Dongpoju (“Dongpo’s house”) was another interesting teashouse where I spent quite a lot of time. It was named after Su Dong Po, a famous poet from the Song dynasty; not only was he famous for writing poems but also for creating special recipes. I only remember how fun it was to be there. Like Wisteria, the building was Japanese style and divided into different rooms with tatami floors and sliding wood doors. But, while Wisteria is more like a clean-cut, beautiful Zen garden, Dongpoju is more like a crazy artist’s room. There are lots of Chinese ink paintings and calligraphy hanging all over the walls, but the most impressive thing there was the bird cage.

It is a good idea to have a bird in an urban teahouse. This bit of wildlife within the concrete forest helps to represent the sprit and peace of the tea ritual. But it is even more interesting to let the bird fly free all over the teahouse. So, while drinking tea at Dongpoju, you not only listened to the bird singing all the time, you had to watch out for the bird pooping!

Getting water to make tea at Dongpoju was also memorable. The water was located in the center of the teahouse, on a rebuilt Taiwanese brick stove: two huge iron woks (around two and half feet wide) full of water, heated with wood or charcoal fuel. The most challenging part of getting the water was keeping your balance while wearing the Japanese wooden sandals (geta) provided by the teashop, and holding a big carved hollow gourd ladle.

Jiufen in the Nineties

It’s no surprise that teahouse owners are often crazy artists. But, as the real estate prices grew sky-high in the late 80s, many of the artists started going to a small, partially abandoned mining town called Jiufen. Located on the northeast coast of Taiwan about an hour from Taipei, the quaint town used to produce gold. During those days some very nice traditional Taiwanese brick houses were built with fine details and intricately carved wood-beam ceilings. Their ornate trappings make a nice home for the teahouses and other small businesses that now line the streets of this hillside town.

Jiufen helped re-establish the intellectual style teahouse. Lots of the shops in Jiufen are still using a mixture of traditional Chinese, Taiwanese, and Japanese elements to decorate their environments. One really stands out with its post modern style though: Tian Kong Cheng (Sky City). As the name implies, it’s built out way up high on the edge of a cliff. The entrance is on the middle level and you can go up to the roof balcony where you can see the entire bay and off to the Pacific Ocean. Or you can go down to the bottom level to experience something very interesting. This level of Sky City is formed by six by six foot concrete blocks rising out of the water. There are wide channels between each of these platforms and you have to jump around to get from one to another. Neon lighting under the water produces a fantastic effect and makes each platform a unique space for enjoying the art of tea.

After more than two decades of development, like all other products in the world, the teahouses have been repackaged into “better” models. Once you walk into one of the chain shops, you will be served samples of tea by someone dressed in traditional Chinese style clothes. You will be shown to clean and consistent tables and be served a standard fare of tea and snacks. Besides tea pots and cups, you will be introduced to some other tea products that you will “need” to go along with the tea you are interested in, such as beautifully carved bamboo sticks for scooping tea from a fine container into a hand-made clay pot. There are also elaborate trays for holding teapots that have special drains to take away excess water and an endless array of decorative items to make the art of tea appealing to all.

But, if you’re a purist and a traditionalist, there are still some other independent teahouses with unique character that you can visit, though you will be charged a lot in order to help the pay the now high rents. Wisteria is still there after decades of legal fighting over the property ownership was finally resolved when the government decided to proclaim it an historic landmark. The last time I visited Taiwan, I went to Chen-xin Cai (Clean Mind Tea Room) a well-respected, intellectual style teahouse in Taipei. I sat in a Ming dynasty style chair and used Song dynasty style ceramics to drink the new Alishan High Mountain oolong tea. Everything was arranged perfectly and served beautifully. While listening to the guqin music and water running through the miniature Zen garden, somehow there was a little voice in my heart hoping to hear the flutter of a bird flying behind my back and pooping on my perfectly arranged tea table.

Donna Lo is the founder of Far Leaves Tea in Berkeley, California. A Taiwan native, she holds degrees from Taiwan National University and New College of California. www.farleaves.com