The Potter and the Cook

Soon after I met my partner, the potter Hanako Nakazato, she gifted me an almond shaped bowl glazed in gray with a silver stripe running down the center. I was struck first by its delicate beauty, its rim tracing a perfect teardrop. Its simplicity spoke to me, soft and noble. I had never seen a handmade bowl with walls so thin, so exactingly made but still warm and inviting. When I moved to Japan I understood the origin of that bowl, its form, its balance, its structure, and most importantly, its purpose.

Presentation is an integral aspect of Japanese cuisine. Hanako grew up eating exquisite food made and presented with particular care by her mother Kuniko in dishes made by her father, Takashi, a renowned potter. It’s an upbringing that gave her a deep and visceral sense for the craft itself and perhaps more importantly respect for its role at the table. 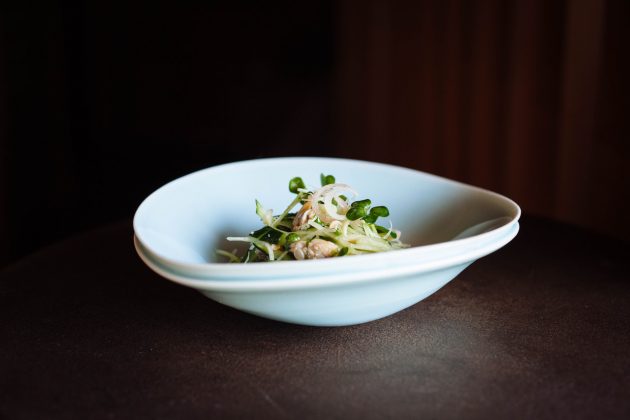 When Hanako took up pottery she followed the common thread that runs through this branch of Nakazato potters who primarily make tableware, crafting expressive vessels with regard for the cook. How a vessel is made and how it is used carry equal weight in a partnership that only works when both the craftsperson and the cook work with skill and vision but check ego at the door. When tableware that is masterfully made is then masterfully used, the food and vessels complete each other.

Komainu, two lion-like figures, flank the entrance of most shrines in Japan. One, with its mouth open utters a, the first letter of the Sanskrit alphabet, while the other, with mouth closed, utters the final letter um. Their voices come together in the word aum (om) a sacred syllable that resonates with a universal energy that feeds us all. So too the craftsman and the cook harmonize, animating tableware in a synergistic relationship greater than the sum of each part. When each works with care and consideration, and when neither overworks their dish, vessels come alive. When the craftsman says a and the cook says um, we at the table are blessed.