The Japanese version of Alex Kerr’s first book, Lost Japan, won Japan’s Shincho Gakugei Prize for the year’s best work of non-fiction, while translations have already become a mainstay of literature on contemporary Japan.  That book was very much about feelings — Kerr’s feelings about Japan, Japanese people’s feelings about their own country. 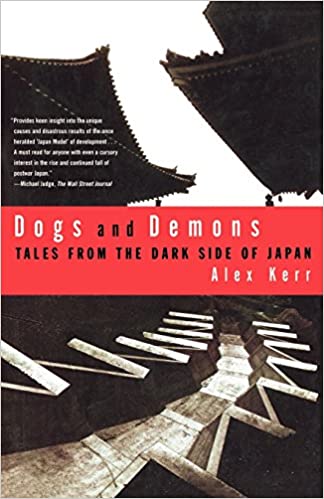 In his new book, Dogs and Demons: Tales from the Dark Side of Modern Japan, Kerr investigates the stark reality behind all those feelings. Though still filled with passion for his erstwhile homeland, Dogs and Demons reveals the heavy layers of rickety structure that support contemporary Japan. The facts will not surprise those familiar with this country: Kerr simply pulls back the curtain for us to see the elaborate and embarrassing emperor’s new clothes -kind of mechanisms that are happening backstage, of which many Japan-watchers had glimpses or intuitive understanding. What is more astonishing is the fact — which Kerr also addresses — that the curtain has managed to stay down for so long.

Kerr spoke with Kyoto-based writer Catherine Pawasarat on a recent visit to Kyoto.

Where did the title of your new book, Dogs and Demons, come from?

Alex Kerr: It’s a Chinese story. The emperor asked the court painter, what’s easy and what’s difficult to paint? He responded that demons are easy, dogs are difficult. And what he meant was that the quiet, low-key things in the environment are very hard to get right, but the grandiose, imaginary statements are easy.

This book has been the hardest project I’ve ever done in my life, but also one of the most fascinating, because I learned so much. When I wrote Lost Japan, it was all just “kimochi” (feeling), and I didn’t really know any of the mechanisms. Now I really know where the money comes from, who the planners are, why dams get built, who manages them, etc.

The book is massively researched, facts and figures coming out of my ears. The poor reader gets an awful lot of numbers, like how much concrete Japan pours in a year — which, by the way, is 30 times the world average per square foot. Why did I have to do this kind of detailed research? For the credibility. It needed to be backed up so that people living in foreign countries would realize that I’m not making it up! Part of it is a PC issue, I think we’re all taught that we’re not supposed to criticize other cultures. That’s why I think it’s so important for the readers of this book to realize that it’s not just another foreigner criticizing Japan — I am expressing the voice of the Japanese criticizing Japan. 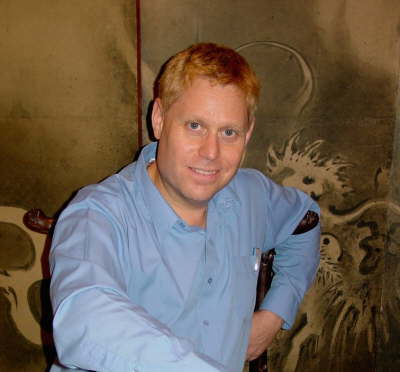 How do you mean?

AK: This is a book that gives voice to the Japanese who feel exactly as I do, and who exist by the millions. Japanese bookshelves are filled with angry books all of on these subjects. But all of this stuff is in Japanese, it doesn’t get into the foreign press, because the Japanese are writing it for themselves. A huge amount of what I write, these are Japanese making these comments, not me. There are hundreds of Japanese quoted in this book.

How does the dogs and demons concept relate to Japan, specifically?

AK: In Japan, you’ll find the dogs and demons problem across the board. For example, you’ll find it in finance: instead of making the fundamental changes that will reinvigorate finance, colorful surface statements are made. And the combination of demons is now driving this country into serious debt. That’s one subject in the book:  this country is now riddled with debt, it’s the most indebted nation in the world, by far. America’s national debt as a percentage of our GNP reached its height some years back at 65%, while the worse cases in Europe are Italy, France, and Belgium, which are up above 100% of GNP, nearing 110%, I think. So Japan is at 130% and skyrocketing. And it’s to support the demons, to support absurd and outrageous spending.

Why do we get demons? Because the bureaucracy truly doesn’t have a clue anymore what culture, city planning and the arts are. But they feel duty-bound to do something. So they come up with demons.

So does this book focus a lot on finance?

Just as one part of the whole picture. I begin the book talking about what happened to the environment, then finance. Then I go on to talk about a number of different subjects that appear to be unrelated, but are in fact closely related: the bureaucracy, old cities, new cities, education, ikebana, cinema and internationalization.

I have a chapter on information, which I think is the first ever in English, by anybody, on how Japan handles information. That is a critically important subject that relates to Japan’s failure to become a modern state, which is another central theme in the book.

When information is hidden, lied about, mishandled etc. — as it is routinely in this country, from top to bottom — then you have a big problem from a modern technology point of view. That’s why nuclear plants are failing, that’s why milk isn’t treated properly anymore. In America, hiding information is always a big mistake. In America, you get sued. In Japan, there are no penalties — no one ever sues, no one ever questions. Here, hiding information has been “for everybody’s benefit.”

You know that nuclear accident that happened? The nuclear plant employees were mixing nuclear material in a bucket!

Yes, the trouble is that lying doesn’t fit in with modern technology. It just doesn’t.  And then you come into serious problems like whole towns, hundreds of thousands of people needing to be evacuated because of a nuclear fission accident. “Little” things like that begin to happen once you have lied and hidden and disguised it too long.

One would feel better if one thought that there were all-knowing bureaucrats with secret files in which they kept the truth, even though they might be covering it up. The fact is that the ministries themselves have lost track. They wouldn’t know anymore where the dioxins really are. They wouldn’t know anymore which hospitals are consistently doing malpractice and which ones are treating patients properly. They wouldn’t know anymore, for example, which drugs are efficacious, because Japan doesn’t have a drug protocol for testing. The purpose of that is to protect Japanese pharmaceutical companies so they can make copy-cat medicine and sell them to the Japanese public, even though it might have side effects.

At the moment this is happening in finance as well. It’s perfectly clear that the Finance Ministry at this point really doesn’t know where the bad debts are, because it was all hidden so well, with the Finance Ministry’s own connivance. Now they have a terrible problem, and really they don’t know anymore. That applies to many, many fields.

Like toxic waste. To this day you don’t have to report the amount of toxic waste that you’re dumping or where you’re dumping it. After that goes on long enough, the Environment Ministry wouldn’t have any idea where the toxic waste is. So Japan has reached a scary point where the people in charge no longer know the real problems of their own ministries. The hard facts that they need to make clear decisions are not available.

This is not what I’d call an efficient managing of a modern state. That brings us to the question — central to my book — of whether or not Japan is modernized. I would say no.  If the Health Ministry doesn’t know what really qualifies as an effective drug, if the Environment Ministry doesn’t have a clue about where the toxic waste is buried, if the Finance Ministry really doesn’t know where the bad debts are, we are not talking “efficient modern administration.”

It’s more like “flying by the seat of your pants!”

Sure is. It’s the sort of thing you would expect of a banana republic. It’s not what you would expect out of Japan. And yet it’s the reality. It’s a fascinating subject. It was later in the process of the book that this issue of information began to appear, and I began to realize how important it was.

For historical reasons, it’s almost a knee-jerk reaction to see Japan as modern this, modern that. My argument is that Japan is a FAILED case of modernization, that essentially modern technologies froze here somewhere between 1965 and 1970, and that in one single area, which was manufacturing, Japan continued — and even then at a slowed-down pace — to absorb technologies from abroad. But in every other area, it failed to acquire the technologies that are the mark of a modern state.

One of the fascinating aspects of all this is that Japan can fight it and fight it. But change is here! Reality is knocking on the door. How Japan is going to deal with reality is the issue, but whether reality will make itself felt, I have not a doubt. Certain sectors are going to be internationalized, like it or not. One way or another, politically, the bureaucracy, the educational system, the industrial infrastructure, it is all going to change, it has GOT to change. How, and to what degree, and how fast, and whether it changes enough to make a difference, those are things that no one can predict.

But Japan cannot go on, I don’t feel, as it is now. The strain is just huge. Which is good. Change may save this place. That’s what we hope for, that’s why I’ve written this book. If enough people look at the boondoggle public works demons, and say, “This is horrible, stop it!” then they will.

I don’t foresee a big political movement, that’s not the way things change here. Again, it’s “kimochi.” If there’s enough kimochi out there, then with amazing speed it will change.  Once the kimochi has begun to change, it’s amazing, the speed with which this country can make changes.

So this book is a contribution to the kimochi.

Another Kyoto: An excerpt

Catherine Pawasarat worked as an advocacy photojournalist and studied traditional Japanese arts (including koto, shamisen, kyogen) in Kyoto for 20 years, culminating in her landmark work at GionFestival.org.